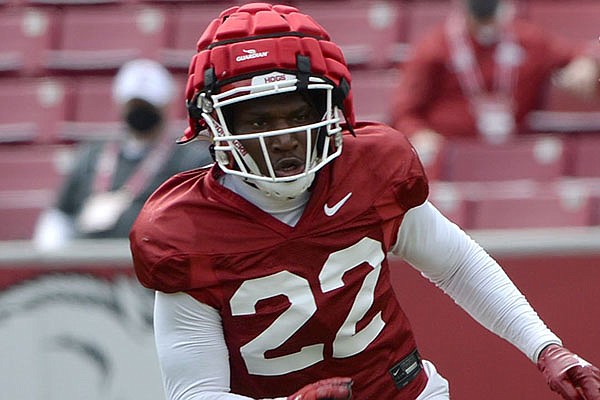 Arkansas linebacker Deon Edwards is shown during a scrimmage Saturday, April 3, 2021, in Fayetteville.

FAYETTEVILLE — The Arkansas Razorbacks got good news with linebacker Deon Edwards returning to Wednesday’s practice No. 11 of camp in “spider” pads on a cooler, overcast and misty day.

Additionally, running back Josh Oglesby appeared to show no ill effects from what looked to be an issue with his foot on Tuesday. Oglesby was back at practice moving with no apparent strain.

Returning running back starter Trelon Smith was not visible during the opening viewing period, the third consecutive day he was not in sight. Freshman tailback AJ Green was also not in the early periods with the running back group.

Starting center Ricky Stromberg wore a green no-contact jersey for the second day in a row. His status for Saturday’s scrimmage is not known.

Also in green was defensive back Kevin Compton and cornerbacks coach Sam Carter, who has shown a penchant for wearing interesting gear and covering himself from head to toe with gloves, a long gaiter mask and leggings.

Defensive backs Jalen Carter and Trent Gordon and offensive tackle Marcus Henderson were all in normal jerseys after donning green earlier in the week.

Gerald geared up for return

Gerald, a transfer from College of the Canyons in California, is a sixth-year senior who took advantage of the extra eligibility provided by the NCAA due to the coronavirus pandemic.

This will be his fourth season with the Razorbacks.

“That’s part of football,” Gerald said after Wednesday’s practice when asked about dealing with injuries. “That’s behind me. I have great support from my training staff, my coaches, everybody.”

After playing in eight games in 2018 and starting the last two, Gerald suffered a season-ending neck injury in the 2019 opener against Portland State.

“I’m just ready to play,” Gerald said. “I’m ready to get on the field. I’m healthy again and I’m ready to see what I can do.

“I’m ready to do whatever I can to put the team in the best position to win.”

Gerald has gotten work with the first and second units in camp.

“He’s hungry,” defensive line coach Jermial Ashley said. “He’s determined. He’s ready to work. He wants to learn, and he wants to understand what he’s doing. … He wants to get out there and kind of put it all together.”

Tyson Morris made two of the best catches of the day inside the Walker Pavilion in the early going on Wednesday.

The senior from Fayetteville reached behind and to his right across his body to make a strong catch during quarterback-receiver drills against air. Moments later, Morris went high over his left shoulder to snare an all-hands reception on a bullet pass from KJ Jefferson.

The only other catch during the open media portion that rivaled those was one by Treylon Burks, who reached low while in stride to snag a KJ Jefferson pass just off the turf before tumbling over with the reception.

Star wideout Treylon Burks was wearing a microphone for Tuesday’s practice. Video of the event was released on social media, in which Burks went around telling folks he was “mic’d up,” like Jalen Catalon and offensive coordinator Kendal Briles, who replied, “Guess I’ll have to not talk bad to you?”

Replied Burks, “Nah, it’s good” before taking a toss from Briles and firing a pass.

When Pittman stopped and looked down, Burks laughed and yelled “Gotcha! Hah-hah-hah!”

Pittman took a few steps with a whistle in his mouth, then replied, “Whole team’s running sprints.”

Demerick Gary, a graduate assistant defensive line coach who played at SMU, has been a vocal presence at practice.

“He brings a lot of energy, a lot of excitement and you know, we needed that,” defensive end Dorian Gerald said. “We needed to make our D-line get more into it and he definitely brings the excitement and the energy to everybody, not just the D-line.”

Eric Gregory, who is working at both defensive tackle and end, said Gary made sure no one was dragging during the team’s first morning practice on Wednesday.

Senior receiver De’Vion Warren has 65 kickoff returns for 1,610 yards — including a 100-yard return for a touchdown against Auburn in 2017.

But Warren might not be returning kickoffs now after he tore an interior cruciate knee ligament on a return at Florida last season.

“De’Vion, the thing I’ve been proud of with him is he just wants to do whatever we need him to do,” Fountain said. “The thought for me is I want him ready, but let’s maybe also get some other guys ready.

“He’s coming off an injury, so it really gives us an opportunity to focus on some other guys.”

“We started focusing on [kickoff returns] really late last week, so we didn’t start early on doing that,” Fountain said. “I’ve got to really get that cut down. I think we’ve got some good candidates, and man they worked hard at it this summer on their own catching balls and stuff.

“I’m really pleased because we’ve got some guys who really want to be back there, and that’s a big part of it.”

The UA football account posted a video to Twitter of senior receiver De’Vion Warren getting a slight step on freshman Jermaine Hamilton-Jordan, with the possible use of a subtle straight right hand, to catch a go-route score.