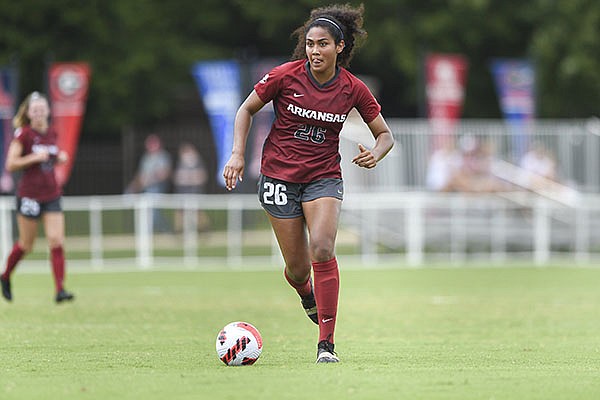 Arkansas defender Bryana Hunter (26) advances the ball during a scrimmage against Arkansas-Little Rock on Sunday, Aug. 8, 2021, in Fayetteville.

FAYETTEVILLE — University of Arkansas women’s soccer Coach Colby Hale said this year’s team has high expectations. He’s arranged some stiff early tests for the No. 13 Razorbacks with that in mind.

Arkansas opens the season today at No. 6 Duke in a match that’s scheduled to start at 6 p.m. Central. The Razorbacks travel down the road to take on No. 3 North Carolina at noon Central on Sunday, then host No. 15 Brigham Young in their home opener on Aug. 30.

RECORDS: Season opener for both teams

That’s three top 15 opponents in less than two weeks to begin the season. But Hale has a plan in mind.

“It’s cliche, but if we want to be the best, we have to play the best,” Hale said. “We like our team. We’re experienced. Our first three games will be against teams who are intending to be in the Final Four.

“If we want to get to the Final Four, we have to play those teams and test ourselves and see where we’re at and grow and get better.”

Arkansas returns every player who played in its Sweet 16 loss to eventual national champion Santa Clara in May, but that’s not all. The Razorbacks have added a talented freshman class and six transfers.

“I think this is like parenting,” Hale said. “You’re never ready. You just kinda like go do it. The good news is Duke’s gonna be in the same place. They return almost all their players. They got some good transfers. But they’re early, too.”

Hale believes this team could be special.

Hale said players like midfielder Kayla McKeon and forward Parker Goins, who had chances to move on, stayed for one more season at Arkansas with the thought of a special finish to their careers.

“I think that’s why they came back,” Hale said. “They accomplished five straight SEC championship games, two SEC championships. They beat I don’t know how many top five teams. Had they ended their career, it would have been a very special career.

Others think so, too, since Arkansas was voted by the league’s coaches as the preseason co-favorite along with No. 9 Texas A&M to win another SEC title in a poll released Tuesday.

McKeon, a second-team All-SEC selection last season, has recovered from ankle surgery in the spring in time for the NCAA Tournament. She admits she wasn’t at full speed. It’s one reason why she’s so excited about what will be her sixth season in Fayetteville.

“I’m perfectly healthy,” McKeon said. “I’m the healthiest I’ve been in the past two years or so. My senior year, I had to redshirt and then the fifth year was covid. It’s super weird that there are girls who are two years younger than me that are seniors.

“We’ve never had this much experience. It’s really nice to have all different types of leaders. It is very comforting to know you can be your true self and that’s what you want everyone to be.”

“We’ve played together very well, and the chemistry there is something that can only come with time.”

That experience is one reason Hale believes his team is prepared for anything that comes its way.

“What we said is we want to control our own destiny,” Hale said. “You’re gonna have injuries, but none of that should matter to us. We should be able to overcome anything that comes our way and that’s our plan.