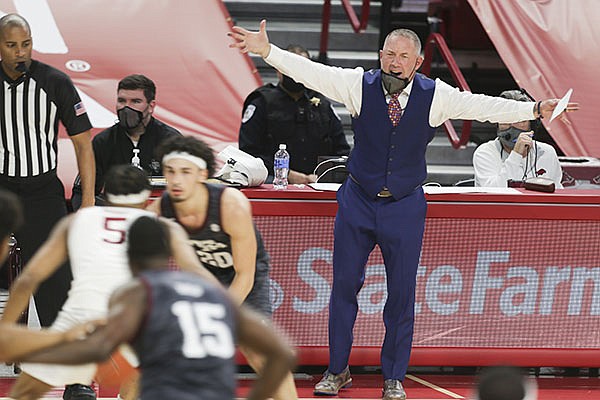 Texas A&M coach Buzz Williams directs his players during a game against Arkansas on Saturday, March 6, 2021, in Fayetteville.

COLLEGE STATION, Texas — Texas A&M basketball coach Buzz Williams has been suspended for two games and the team has been placed on two years of probation for multiple NCAA rules violations, the NCAA announced Friday.

The violations include Williams having impermissible contact in July 2019 with a prospect. Additionally, an unnamed assistant coach observed and held tryouts with a prospect during an unofficial visit. That assistant was found to have conducted multiple supervised workouts off campus with team members and a prospect that were not allowed because of the pandemic.

The school suspended that assistant from June 2020 through the 2020-21 season.

The NCAA and Texas A&M worked together through the negotiated resolution process to come to terms on the punishment.

Williams is entering his third year at Texas A&M. The Aggies went 8-10 and 2-8 in SEC play last season in a year where they had to cancel multiple games because of coronavirus issues.