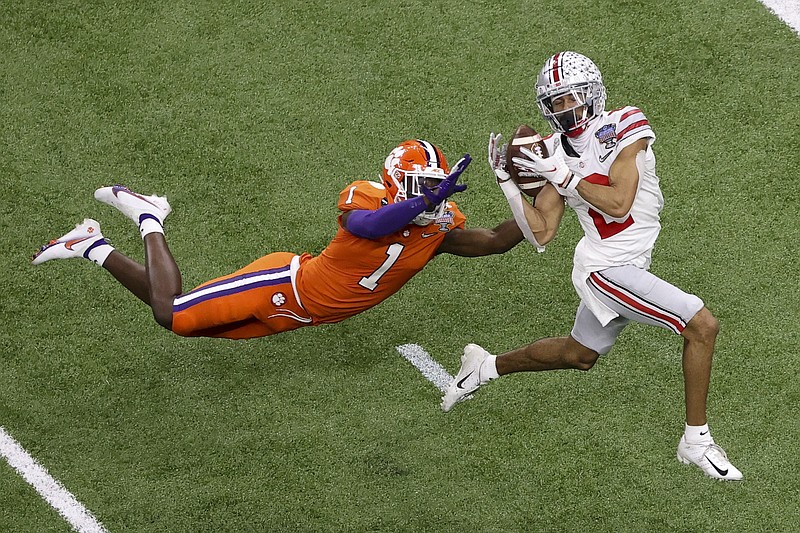 Ohio State wide receiver Chris Olave catches a touchdown pass in front of Clemson cornerback Derion Kendrick during the second half of the Sugar Bowl in New Orleans on Jan. 1. Clemson's conference, the ACC, and Ohio State's conference, the Big Ten, announced an alliance together and with the Pac-12. - Photo by Butch Dill of The Associated Press

Facing a rapidly shifting landscape in college sports, the Atlantic Coast Conference, Big Ten and Pac-12 have agreed to work together to create stability during volatile times.

Less than a month after the Southeastern Conference made an expansion power play by inviting Texas and Oklahoma to the league, three of the SEC's Power 5 peers countered with an alliance of 41 schools that span from Miami to Seattle.

The commissioners of the ACC, Big Ten and Pac-12 on Tuesday pledged broad collaboration on myriad issues and committed to league members playing more football and basketball games against each other.

They also suggested they wouldn't be poaching each other's schools.

“The history of college athletics, one expansion of a conference has usually led to another to another and to another,” ACC Commissioner Jim Phillips said during a video conference. “And to the three of us, we felt the stabilization of the current environment, across Division I and FBS — in Power 5 in particular — this was a chance for a new direction, a new initiative that I don’t think has ever been done before.”

After weeks of internal discussions, the alliance is still mostly conceptual and collegial.

“There's no contract. There’s no signed document," Pac-12 Commissioner George Kliavkoff said. "There’s an agreement among three gentlemen and a commitment from 41 presidents and chancellors and 41 athletic directors to do what we say we’re going to do.”

The SEC sent shockwaves through college athletics in July when it was revealed that Texas and Oklahoma would be leaving the Big 12 to join the nation's most powerful football conference no later than 2025.

"I wouldn’t say this is a reaction to Texas and Oklahoma joining the SEC, but to be totally candid you have to evaluate what’s going on in the landscape of college athletics,” Big Ten Commissioner Kevin Warren said.

In a statement, SEC Commissioner Greg Sankey said: “We have respect for each of our conference colleagues and look forward to our future collaborations. I believe we remain unified by our shared beliefs around the positive impact college sports has on the lives of student-athletes throughout our communities."

As for the Big 12, its future is murky at best as the eight remaining members plot their next moves and try to work out a divorce from the Longhorns and Sooners. The realignment of Texas and Oklahoma could lead the Power 5 to shrink to four.

“We want and need the Big 12 to do well,” Phillips said. “The Big 12 matters in college athletics.”

But it will not be part of the alliance.

The alliance also is being formed as the NCAA shakes off a Supreme Court loss and considers handing off more responsibility to conferences and schools to run college sports. The NCAA Board of Governors has called a special constitutional convention in November, the first step toward what could be sweeping reform and a decentralized governance model.

“We did the alliance to protect the collegiate model,” said Kliavkoff, who is only in his second month on the job of leading the Pac-12 after serving as president of sports and entertainment for MGM Resorts International in Las Vegas.

There is also a proposal to expand the College Football Playoff from four to 12 teams currently in the pipeline. The proposal was crafted by Sankey, Big 12 Commissioner Bob Bowlsby, Mountain West Commissioner Craig Thompson and Notre Dame athletic director Jack Swarbrick, and unveiled publicly in June.

Kliavkoff and Warren both said their conferences support playoff expansion, while Phillips said the ACC had not landed on a final position.

The commissioners and university presidents are scheduled to meet in late September in Chicago to discuss what comes next for the expansion proposal.

“This is not a voting bloc,” Kliavkoff said of the alliance in a brief interview with AP. “We've not committed to voting together on anything. We've committed to discuss all of these issues, and to try to come up with solutions that are in the best interest of long-term college athletics.

“I'd be surprised if we come to different conclusions with respect to how we think about CFP expansion, but it's not a voting bloc."

But that could take time to come together, especially in football.

Nonconference football schedules are typically made years in advance and many schools already have mostly full slates in the coming seasons. The commissioners said they did not expect their schools to break contracts to accommodate new agreements within the alliance, nor would they prohibit members from scheduling schools from other leagues.

The ACC, Big Ten and Pac-12 tried to make a bold statement by unveiling the alliance, but with no concrete plans in place it will start as a merely a promise to act with mutual interests in mind.

“Hopefully, this will bring some much needed stability in college athletics,” Warren said. "I also think what it will do is allow people to understand where everyone else stands. Some of the events over the last couple of months have shaken the foundations of college athletics.”