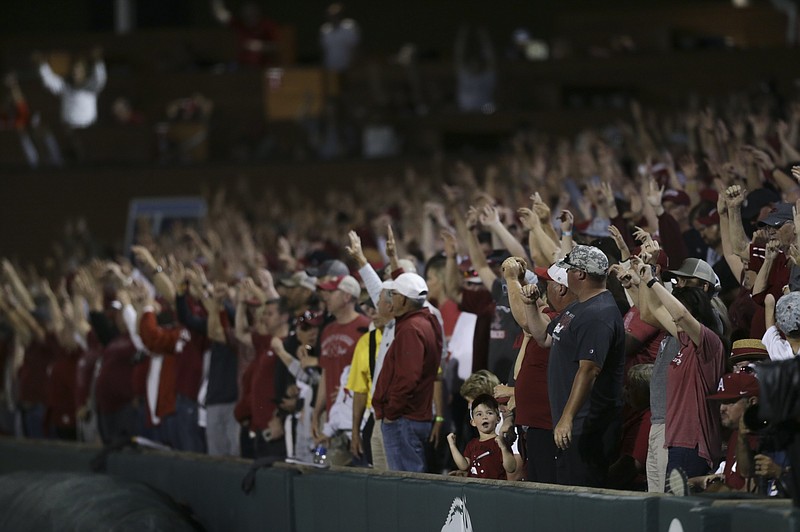 FAYETTEVILLE — University of Arkansas athletics director Hunter Yurachek cited ticket demand and equity as the driving forces behind the change in seating priority at the Razorbacks’ baseball ballpark, Baum-Walker Stadium, beginning next season.

Yurachek said 43% of season-ticket holders have not paid “market donation rates” for their seats at the stadium. Yurachek said market rates are determined by demand and an analysis of costs at other SEC ballparks.

“When the stadium opened up 25 years ago, there are some loyal fans who have been sitting in, I would call them the best seats in Baum-Walker Stadium, that have not been Razorback Foundation members ever,” Yurachek said. “As there has been attrition there have been people who have come sat beside them who are Razorback Foundation (members) at some of our highest levels, because that’s what is required to get into those seats now.”

According to an email sent to season-ticket holders, all seats in Sections 107-109 behind home plate will require a minimum annual donation of $10,000 beginning in the 2022 season.

Seats in Sections 103-106 and 110-112 will require a minimum donation of $5,000, with the exception of seats in Section 105, where families of players and coaches receive complimentary tickets.

No donations are required to purchase season tickets in the Hog Pen, a grass berm area beyond the left-field wall.

Donations are not sport specific, meaning donors can also apply their total donation amount to ticket-buying opportunities in football and basketball.

According to the UA, there are roughly 1,200 donors in the three Broyles-Matthews levels, more than enough to account for the available 2,383 seats located in the sections near home plate. Broyles-Matthews donors will be able to purchase six season tickets, whereas lower donor groups will be capped at two or four. Yurachek said the ticket limits are designed to allow more individuals and families to purchase tickets.

Yurachek said he expects to lose some season-ticket holders over the change, but he said there are enough people on a waiting list to offset any losses. According to UA figures, there are more than 1,000 accounts on a waiting list to buy tickets at the park, which has a listed capacity of 11,129. There are roughly 2,800 active season-ticket accounts, according to the UA.

“We are past time where we needed to do this in Baum-Walker Stadium,” Yurachek said.

Before the latest change in seating priority, some seats behind and near home plate required Broyles-Matthews Platinum donation levels of $20,000 or more for new ticket buyers. The same sections included season-ticket buyers who had been grandfathered in under previous agreements during an era when attending games was not as popular.

“That person who may have been there for 25 years, we hear as many complaints from the person sitting next to them who for 10 years has been paying the full Razorback Foundation donation, and says, ‘Hey, I’m going to stop paying my donation if the person next to me is not paying anything to sit there,’” Yurachek said. “We hear it from both sides of the fence.”

Yurachek stressed that all existing season-ticket holders would be eligible to buy tickets for the same amount in 2022 as they previously paid, with two exceptions: those in chair-back seats who did not have a donation tied to their tickets, and suite holders.

The Razorbacks have promised a cap on all non-suite season-ticket prices through at least the 2024 season. Season-ticket packages cost $250 per seat.

“One of the things we were very intentional about is everyone who has a season ticket right now will have the ability to have a season ticket in Baum-Walker Stadium next year,” Yurachek said. “No one is getting kicked out of the stadium, but…you’re going to have a make a choice: Do I want to stay in these seats and pay at that level? Or am I going to move somewhere else in the stadium to retain my season tickets?”

Season-ticket holders were informed Thursday of the impending change through an email blast, then received a personalized email from the Razorback Ticket Office on Friday. Those emails detailed how much ticket holders paid for their seats last year and how much they would have to pay for the same seats moving forward.

“We’re taking a very personal approach to this,” Yurachek said. “We opened a customer service center down at the Razorback Foundation. Every season-ticket holder will have a date and time to call into the customer service center. We’ll talk to them about what their options are, whether it’s a payment option so that they can retain their current seats…or what other seats would be available that are more in the price range of what they want to pay.”

Many season-ticket holders took to social media and Internet message boards to voice their displeasure with the policy Friday. Marty B Cornell said she began donating to the baseball program along with her late father in 1995.

“Since 1995, I have donated $9,350 to baseball, but that means nothing now,” Cornell wrote on WholeHogSports.com. She granted permission to quote her post in this story. “I need to come up with $3,000 per year to keep my seat.”

That, she said, would amount to a 250% increase in annual giving.

Cornell said college baseball has “long been a welcoming (and reasonably priced) venue for families.” She said many of her friends have been able to take their entire family to Arkansas’ baseball games, but not to football games due to cost.

“I doubt that many of them will be able to afford the required baseball donation,” Cornell wrote. “Our tailgate bunch consists of many teachers, not the denizens of executive board rooms. And teaching is not exactly a highly paid profession.”

Stephen Caldwell said he has had tickets since Baum-Walker Stadium opened in 1996, when he purchased a family plan that included discounted tickets for his children. He said he has seen ticket prices increase incrementally since then, but the latest change will more than double the price of his seats.

“This is baseball, it’s not Afghanistan, so…I try to keep the right perspective,” Caldwell said. “I also understand that college sports are big business and they do what they need to do, but from what I’ve seen a lot of people are being asked to double or more their donation to keep their seats, and a lot of these people are fans who don’t have that kind of money. For me, I don’t know whether we’ll keep our seats or not.

“I know for a lot of people it’s going to be hard, and it’s a lot of people who are responsible for the atmosphere, the thing that makes Baum Stadium really what it is.”

Caldwell said he thinks there will be more empty seats at games after the change.

“If I spend a certain amount of money on a ticket, I’m probably going to use it if I can, or I’m going to sell it or I’m going to give it away,” Caldwell said. “I’m going to make sure it’s used because that $20 is a big deal to me. If $20 isn’t a big deal to me, not going to a game because it’s too hot, too cold, too wet, too whatever, or because I just have something better to do — it’s just not that big of a deal, so they just don’t go.

“I just know Arkansas baseball would not be the same if not for people like Hognoxious (Bobby Smittle) or people bringing the flags on their retractable poles, or the people holding the spoons or creating the beer hat phenomenon. God bless them, because that’s what makes Arkansas’ experience different from any other place you can go in America.”

Yurachek said money was not the driving force behind the change in seating priority, but said it would be “disingenuous” not to acknowledge donations will increase because of it. He said the increased revenue will support baseball and other programs on campus.

In a video sent to season-ticket holders Thursday, Yurachek cited the Razorbacks’ increased investment in baseball over the past decade. According to its NCAA Membership Financial Report, the UA had baseball expenses in excess of $4.6 million in 2020, up from $2.7 million in 2010.

Arkansas is one of a handful of baseball programs nationally to turn a profit, Yurachek said, but the costs to remain competitive are increasing. Yurachek cited increased costs in travel and technology, and keeping up with improvements at other SEC stadiums that are geared toward the athlete experience.

“When I arrived, Coach (Dave) Van Horn and I took a tour of his clubhouse and his locker room, and for a program that had been in the top 20, if not the top 10 for the better part of its most recent history…we weren’t even close to where we needed to be for our program,” said Yurachek, who was hired in December 2017. “Ole Miss just renovated their stadium, Mississippi State built an entirely new stadium, Texas A&M had a fairly new stadium built in the last decade — all of our programs in this league are investing and reinvesting in their facilities.

“Baseball and the investment you have to make, especially at this level if you want to stay nationally competitive, is significant.”

Yurachek said the costs associated with the Hunt Center and salary increases were covered through previous donations and the Razorbacks’ operating budget.