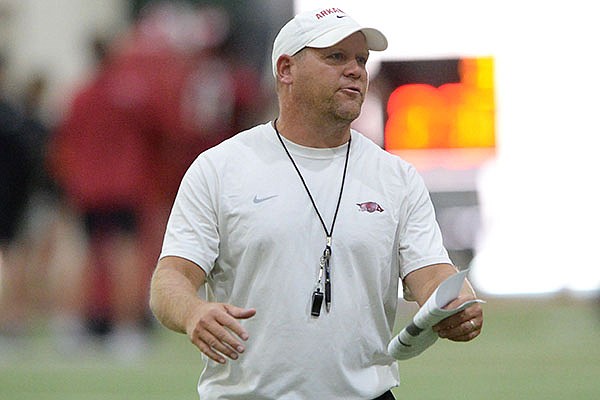 Arkansas defensive coordinator Barry Odom speaks to his players Friday, Aug. 13, 2021, during practice in the Willard and Pat Walker Pavilion in Fayetteville.

Six days from today, the University of Arkansas will kick off its season against Rice and defensive coordinator Barry Odom will be doing what he envisioned himself doing early in life.

Because of his love for football, coaching was on his mind while growing up. His respect and admiration for his high school coach Larry McBroom helped make the decision to enter the coaching profession easier.

“I knew early on I wanted to be involved in coaching. Once I was around coach Larry, I watched how he gave people hope,” Odom said. “He provided them a platform to be successful and then just the way he did it. The way he carried himself and led in every situation.

“He was one of the best motivators I’ve ever been around. He had a great way of not only getting us prepared to go play our best, but also related very well to everybody on our roster.”

McBroom is a legendary figure in Oklahoma after winning 199 games and seven state titles at Ada High School. His father Craig coached Ada to six state titles and won 157 games, and his brother Gary also headed up the program from 1996-99.

Odom and his family moved to Ada from nearby Maysville after his junior season. He helped the Cougars win a second consecutive Class 4A state championship in 1994 by rushing 22 times for 144 yards and 4 touchdowns in the title game.

“We were a talented team, but we were also the best coached team of anybody we played and I don’t think it was even close,” said Odom, who also played linebacker. “He had us so well prepared and so confident.”

Odom eventually signed with Missouri where he recorded 362 career tackles and was a team captain as a senior in 1999. After his playing days were over, his first coaching job was as an assistant for McBroom at Ada.

“He was going to be successful no matter what he did simply because of his character and the man he was,” McBroom said. “We were thrilled to death he chose to coach because of what he could give back to the players.”

It was during Odom’s first practice as a player at Ada that McBroom knew he had the makeup to be a successful coach.

Being on McBroom’s staff allowed Odom a more in-depth look of how to prepare.

“I realized the amount of time and effort he put into just a practice schedule, the organization, the discipline, the consistency he did it with is really unmatched,” Odom said. “It’s something I’ve tried to carry with me, but also his understanding on how to get your best players in the right spot to be able to play and utilize their skills.”

Odom is well respected in college coaching circles and has a reputation of caring for his players. He credits his parents Bob and Cheryl and McBroom for the trait.

“Fortunately I was raised in a household that was built around a lot of those qualities of love, treating people with respect and fairness,” Odom said. “Fortunately for me, coach Larry was just another branch of that.”

Mentoring and influencing his players’ lives in a positive way is a priority for Odom.

Odom’s treatment of others was noticeable at Ada.

“He was one of those guys that never ever thought he was better than anybody else,” McBroom said. “Whether it was the other starters on the team, whether it was that fourth-team guy. He always treated them with respect and dignity and made them feel just as important as he was. I’m sure he’s probably doing the same thing as a coach at Arkansas.”

Because of his respect for McBroom, Odom recalls feeling devastated after missing an assignment and disappointing his coach during his senior season.

“I looked up and coach Larry had come out. He didn’t ever rant or rave but he got close enough on the field, and he and I made direct eye contact and he first put his index finger up and gave me the come here, and I jogged over there and he looked at me dead in the eye and he said, ‘Barry Odom, that was pathetic,’ and I’m telling you that has stuck with me.”

McBroom had all but forgotten the incident until Odom mentioned it to him years later.

“I just vaguely, vaguely remembered it,” McBroom said. “That was a rare thing for him to do anything wrong. I can see because he’s such a team-oriented guy and for him to feel like he let someone else down would certainly be devastating to him. There’s weren’t many times he need to be corrected.”

While they share similarities, Odom said there are also differences.

“I think everybody has to be their own person,” Odom said. “You can’t ever try and be somebody else and then you never become whoever you really need to be, but I think his influence is always going to show up in the way I coach or prepare and even treat people. He was such a wonderful man.”

“Unfortunately my vocabulary expanded a little more than coach Larry’s has and so has my coaching techniques, but it’s also not something I’m proud of but I think that’s part of the relationship building with your players and your kids,” Odom said. “You get to know them on a personal level, you understand what makes them tick and makes them go and then you have to take that approach in coaching them and motivating them and helping them in every way you can. Understand what you might say to one guy is not necessarily going to motive the next guy the same way.”

Twenty-seven years after McBroom and Odom met, they both now reside in Arkansas. McBroom and his wife Julie moved to Sheridan where he was a volunteer coach for the Yellowjackets for two years until being named head coach in May of last year.

The move to Arkansas was prompted by the desire to be near their daughter Shara and grandchildren. Son-in-law Michael Daugherty and Shara moved from Texas to Sheridan, where he became pastor of the First Baptist Church. They have two sons, Malachi, 3, and Elijah, 6 months.

Included in Sheridan’s announcement of McBroom’s hiring was a statement from Odom.

“He is one of the most influential persons in my life,” part of Odom’s statement read. “The students and the people associated with the program will all benefit from the leadership that Coach McBroom will provide.”

McBroom’s respect for Odom is mutual.

“He’s such an incredible man,” McBroom said. “His integrity, his character, his work ethic, he’s so loyal. Sometimes loyal to a fault. Such a hard, hard worker. His character is beyond reproach. Not enough good things to say about Barry because he is first class in every regard.”

A small dose of Odom’s loyalty was shown during his time in Columbia when he would invite some of his former high school teammates to a game.

Through his years of coaching, McBroom isn’t one to single out a former player as a favorite, but his admiration for Odom is apparent.

“I can say this, there’s no player that I had the privilege to coach and then to be able to coach along side that I had any greater memories of and love for than Barry,” McBroom said. “Because he was the real deal in every respect and still is. I’m so proud of him and so grateful to be able to call him one of my players.”