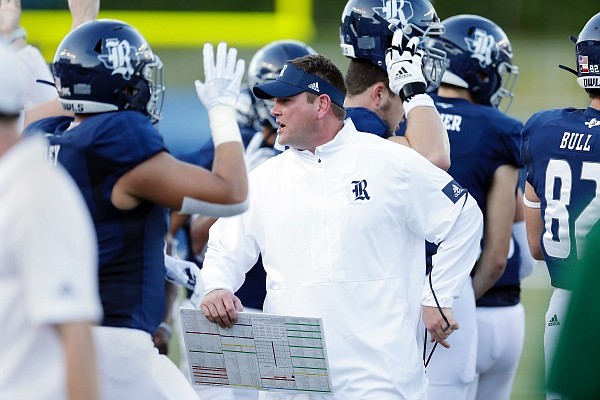 Luke McCaffrey, a four-star recruit at Valor Christian High School in Colorado, transferred to Rice from Nebraska, where he made two starts in seven games last year for the Cornhuskers and completed 48 of 76 passes for 466 yards and 1 touchdown with 6 interceptions. He also rushed 65 times for 364 yards and 3 touchdowns. He had a 47-yard run against Ohio State.

Rice at a glance

“Luke’s dynamic with his ability to extend plays,” said Bloomgren, whose Owls open the season against the University of Arkansas on Saturday. “Anytime he’s running the ball, you forget he’s a quarterback. He runs like a running back.

“But then he drops to pass, and you’re like, ‘Oh my gosh, this kid has a howitzer for an arm.’ He’s got the ability to make all the throws.”

When McCaffrey decided to leave Nebraska, he first transferred to Louisville, but in June he entered the portal again and landed at Rice, where he has three seasons of eligibility remaining.

“I’ve known Luke since he was 9 years old,” Bloomgren said. “He used to walk down the halls at Stanford and be out at practice watching Christian.

“It’s pretty exciting to have him here. I think he’s got a great future as a quarterback.”

As excited as Bloomgren is about McCaffrey, he hasn’t been named the starter.

Bloomgren said McCaffrey and redshirt junior Wiley Green, who has nine career starts, continue to compete for the No. 1 job.

“Part of it is Wiley being in our system for four years and just having a lot of comfort with not only the terminology, but understanding all the shifts and motions, all the kills and alerts in the run game and in the pass game in terms of protections,” Bloomgren said. “He’s got a pre-snap comfort, if you will, that’s allowed him to play really fast.

“It’s Luke’s third week in the system. I think there’s still a little consternation at the line of scrimmage he has to work through. But once the ball is snapped, he’s playing football and it’s fun to watch.”

Mike Collins became Rice’s starting quarterback as a senior last season after transferring from TCU, and he replaced Green, who in 2019 started seven games and completed 75 of 142 passes for 787 yards and 4 touchdowns.

“Luke and Wiley have different skill sets in that Luke is truly a dual threat,” Bloomgren said. “Luke can do anything at the quarterback position.

“Wiley has scrambled for first downs. He’s not somebody you’re going to design a whole lot of quarterback runs for, but he’s not a statue back there. He has the ability to keep plays alive.

“More than that, Wiley gets the ball out so quick. He’s doing everything on time, and it’s just been really good.”

Bloomgren said he probably won’t name a starter before the Arkansas game.

“One of our things we talk about around here is intellectual brutality,” said Bloomgren, whose background is as an offensive line coach. “That’s kind of the brand that we claim.

“If you’re going to say things like that, you’ve got to be physical, and we try to live it and breathe it every day.”

Senior Jordan Myers will play running back, tight end and receiver for the Owls. Last season he had 23 catches for 276 yards and 2 touchdowns.

“I’ve made the joke Jordan’s a Swiss Army Knife, but he can cut you with every blade,” Bloomgren said. “We’ll put him at running back and he might tote the ball or stay in for protection or release on routes.

“Then we’re lining him up at tight end whether it’s in-line or off the ball as the movement tight end. He’s a guy we design third-down routes for, and he’s our short-yardage back.

“I don’t know if I’ve ever had a player that could fill all those roles and do them so well.”

Junior receiver Bradley Rozner is back after missing last season because of an injury. In 2019 he had 55 receptions for 770 yards and 5 touchdowns.

“It’s so nice to have Bradley’s 6-foot-5 frame out there for matchup issues,” Bloomgren said. “Any time anybody singles him up, we have the ability to throw the ball over their heads and Bradley can go up and get it.”

On defense Rice lost linebacker Blaze Alldredge to Missouri as a transfer, and tackle De’Braylon Carroll suffered a season-ending leg injury in the summer.

But the other starters return from a defense that led Rice to a 20-0 victory at No. 15 Marshall last season, when the Owls were limited to five games due to covid-19 cancellations and finished 2-3.

The win over Marshall was Rice’s first over a ranked team since 1997 when former Arkansas player and coach Ken Hatfield was the Owls’ coach for a 27-14 victory over No. 21 BYU.

Linebackers Antonio Montero and Treshawn Chamberlain are both juniors and each have 141 career tackles.

Senior free safety George Nyakwol missed last season with an injury but is back to full speed and has 131 career tackles and three interceptions.

“They’re such a consistent group that have been together for what seems like eons,” Bloomgren said. “They’re really formidable. They’re hard to move, and they make plays.”