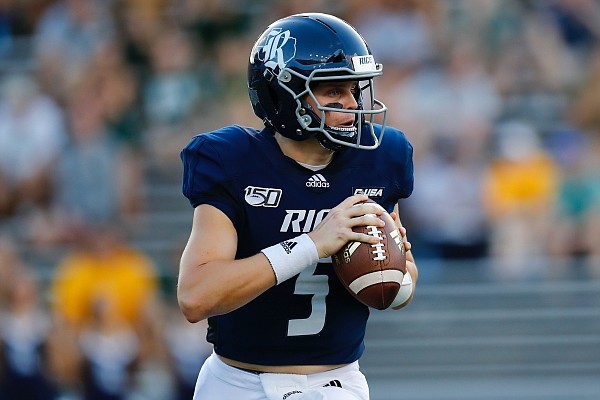 FAYETTEVILLE — Rice coach Mike Bloomgren is in no hurry to name a starting quarterback for the Owls’ season opener against Arkansas on Saturday.

Wiley Green, who has passed for 1,435 yards and seven touchdowns in his career, and Luke McCaffrey, a talented transfer from Nebraska, have been in a preseason-long competition for the starting job. While Bloomgren plans to keep the quarterback situation a secret until after kickoff, the Razorbacks will see both players.

“I guess we should do whatever’s best for the team,” Bloomgren said Tuesday. “It shouldn’t be about my comfort level. I was going to say my comfort level is to have a starter and have him take every rep in practice. That’s not where we are right now.

“The people at Arkansas are going to see two quarterbacks this weekend because they both earned the right to do it. Also, they can do everything in our offense, but (McCaffrey) is a little more dynamic when he’s running with the football.”

Bloomgren added there are valid reasons why each player could be charged with leading the team, and he is comfortable with both quarterbacks running the offense. For McCaffrey, in addition to his ability to run, has a “howitzer for a right arm,” and Green is in his fourth year in the system.

McCaffrey, the coach added, has been with the program for less than two months but has closed the gap knowledge-wise with other quarterbacks in the room. He completed 63.2% of his 76 attempts last season, but threw 6 interceptions in 7 games.

He averaged 5.6 yards on 65 carries and scored 3 rushing touchdowns.

“He’s just doing so many good things,” Bloomgren said of McCaffrey. “They’re both so exciting. … (In our second scrimmage), if they had just hit a few more passes each, it probably would have been more clear one way or the other. As it is, they both hit some passes where we’re like, ‘Holy cow, that’s amazing,’ and they both missed a few that I think they’d want back.

“Right now, I think the best chance for us to win this game and going forward is for both of them to utilize their talents for our football team.”

Arkansas coach Sam Pittman said Monday both quarterbacks have the ability to throw the ball effectively. He indicated, though, that the Razorbacks have spent a great deal of time breaking down McCaffrey’s film.

“We cut up every run that he had from Nebraska, we cut up every pass that he threw from Nebraska and it’s impressive,” Pittman said. “He’s a really good player. You’ve got to watch him when he runs a draw and things of that nature.

“Obviously he played some tailback for them as well, so the guy is a good player. He can run over you, fast enough to run around you.”

Green, according to Pittman, is not as mobile as McCaffrey but would still pose a threat. In 2019, he passed for 787 yards and 4 touchdowns, completing 52.8% of his throws.

“Obviously they went with him a year ago,” Pittman said. “I think there’s two different styles.”