Razorback Report: Devo has plenty of fun in win over UCA 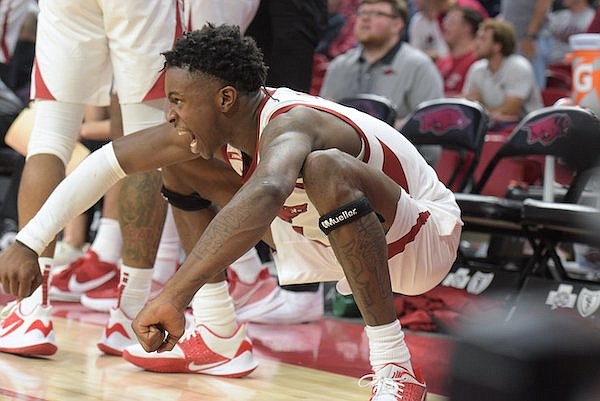 Arkansas guard Davonte Davis celebrates on the sideline during a game against Central Arkansas on Wednesday, Dec. 1, 2021, in Fayetteville.

FAYETTEVILLE — Davonte “Devo” Davis broke out of an early season shooting slump Wednesday by going heavy on his bread and butter in the Arkansas Razorbacks’ 97-60 win over the University of Central Arkansas at Walton Arena.

Davis drove to the basket on the break and made a series of runners in the lane and reverse layups on clean passes from his teammates to record a season-high 16 points for the University of Arkansas.

Davis made 6 of 9 shots, his first game with better than 50% shooting this season, and filled up his stat line with 6 rebounds, 3 assists and 2 steals to go against 2 turnovers.

The 6-4 guard from Jacksonville entered the game shooting 38.1% from the field, with 17 assists and 14 turnovers.

“One of the things that I keep talking to Davonte about is have fun, man,” Arkansas Coach Eric Musselman said. “Like, last year his personality, the smile, the energy … like, he gave me energy. He gave me enthusiasm. And I think this year he’s been a little bit more conservative maybe from a having fun standpoint.”

Arkansas forward Jaylin Williams said he’s seen this kind of basketball out of Davis for three or four years.

“We all know what Devo can do,” Williams said. “We know he’s the best defender on the court.

“We know he can score the ball on offense, break down his guy. Really, we’ve just been waiting for it to come out.”

Davis had a plus-minus rating of plus-30, the highest on the team Wednesday.

The first half was marked by numerous loose-ball situations in which players from both teams hit the deck trying, but often times struggling, to get control of the ball. There were numerous jump balls from the tie-ups.

In one strange sequence, Arkansas forward Jaylin Williams stole the ball on a pass from Camren Hunter on the wing, began dribbling up the court and had it stolen right back from Hunter, leading to a Darious Hall three-point make for a 21-19 UCA lead.

“I’ve never seen so many jump balls in life,” Arkansas Coach Eric Musselman said. “It had to break a freaking record for jump balls. It was absurd.

“I’ve never seen a team create a steal and give the ball right back to the opponent like we did. A lot of stuff we have to get better at.”

Arkansas forward Jaylin Williams snatched a career-high 13 rebounds, including 11 on the defensive end, to help the Hogs to a dominant 47-31 board advantage.

Williams also had 8 points on 4-of-6 shooting, 2 blocks and 2 assists, which would have been more if not for some chip shot misses by his teammates.

Williams’ previous career high had been 11 rebounds in a 73-67 win over Cincinnati last Tuesday.

Central Arkansas swingman Darious Hall, a former Razorback, hit the Bears’ first field goal, a fadeaway from 15 feet at the left elbow at the 15:52 mark. The shot pulled the Bears within 7-3.

Hall, who has been dealing with back spasms, finished with 12 points on 5-of-9 shooting, including 2 of 2 from three-point range, and 3 rebounds in 28 minutes.

“Man, to be honest, when I came in and saw all the fans, my emotions just reminded me how it was my freshman year,” Hall said. “I just stayed calm and came in and played the game.”

UCA Coach Anthony Boone, the salutatorian of his class at Helena-West Helena Central High School, knows about playing games at Arkansas from his playing days at Ole Miss.

“Once he got over the initial nervousness of being here — and I understand, I grew up in Arkansas watching the Razorbacks,” Boone said on the UCA Radio Network. “The first time I played against them, I was nervous. Once he got through that, he was pretty solid and he was just as physical as those guys and was a great presence on the floor for us.”

The Hogs struggled at the line throughout the first half with an 8-for-20 performance for 40%.

Davonte Davis made 1 of 2 at the line to open the game, then Connor Vanover and Stanley Umude both went 0 for 2. When Chris Lykes missed the first of a two-shot foul a few minutes later, it marked the Hogs’ fifth miss in a row.

The Razorbacks did not make both ends of a two-shot opportunity on their first nine chances before Umude went 2 for 2 at the 1:59 mark of the first half.

Eric Musselman’s wife Danyelle gave him a T-shirt on Wednesday morning and told him to wear it to the postgame news conference.

The shirt had Oscar the Grouch depicted on it with the writing “No garbage attitude after a win.”

Both teams got off shots in the first 10 seconds of the game, but only one went down.

Notae snared the rebound and fed Au’Diese Toney at the other end for a fast-break layup to open the scoring at the 19:50 mark.

Fayetteville High School graduate Collin Cooper and ex-Razorback Darious Hall combined for 13 consecutive UCA points to lead a rally that produced the Bears’ only lead in the first half.

Cooper scored underneath in traffic then made a three-pointer from the right wing to forge a 13-13 tie. Hall had a power drive on the right baseline and Cooper made another three from the left wing for another tie at 18-18.

Hall’s three-point shot from the right corner at the 8:22 mark gave UCA its first and largest lead of the night at 21-19.

UCA is playing the first of three consecutive games against in-state competition.

The Bears play at Arkansas State on Saturday prior to a week of finals. The following Saturday, UCA will host UALR at the Farris Center in Conway.

The Razorbacks host UALR on Saturday at 3 p.m.

• Arkansas now leads the series 8-0, including 5-0 in games played at Fayetteville.

• It took a couple of misses and a good bit of time, but Arkansas extended its streak to 1,082 consecutive games with a made three-point shot when JD Notae hit one from the top of the key at the 6:08 mark to give the Razorbacks a 26-24 lead. Jaxson Robinson followed with another from the right corner 28 seconds later and Stanley Umude drained another 16 seconds after that for a 32-24 lead.

• The Razorbacks went with the same starting lineup of guards JD Notae, Davonte Davis and Au’Diese Toney and forwards Jaylin Williams and Connor Vanover for the sixth consecutive game.