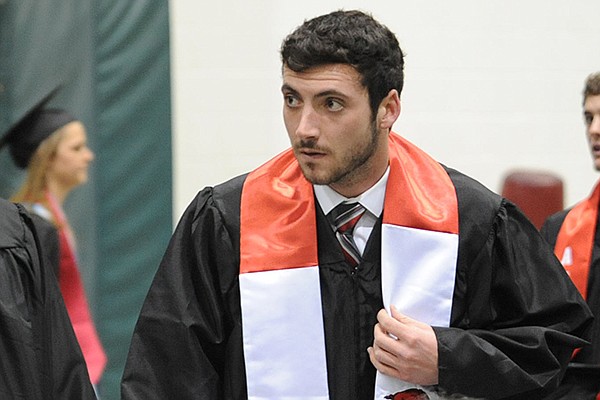 Former Arkansas quarterback Brandon Allen prepares to go through a commencement ceremony on Saturday, Dec. 20, 2014, in Fayetteville. Allen, who enrolled at the University of Arkansas in 2011, is one of the athletes whose graduation is reflected in the latest NCAA Graduation Success Rate data.

FAYETTEVILLE — The Arkansas Razorback football team earned its highest ever Graduation Success Rate score of 84 in a report released Thursday by the NCAA. The score reflects the graduation rates of athletes who joined the program between 2011 and 2014.

The “GSR” score accounts for how many athletes who enrolled over a four-year period actually graduated within six years of starting school. That’s why the most recent data available covers players who joined the team between 2011 and 2014.

Arkansas had the sixth-highest graduation rate among SEC football teams in the most recent reporting period. In the four-year span covered by the report, the Razorback football team was coached by Bobby Petrino, John L. Smith and Bret Bielema.

The six-year graduation rate for all UA athletes who enrolled between 2011-14 was 85%, which tied Arkansas’ highest GSR score. The school got the same score in last year’s report.

Because the most recent report covers athletes who enrolled between 2011-14, it is not reflective of the academic progress of current team members.

Arkansas’ overall GSR score is 12th among the SEC’s 14 schools. Arkansas’ latest overall score is 25 points higher than the first GSR report in 2005.

“Graduation is an essential component to fulfilling our mission of Building Champions and Razorbacks for Life,” Arkansas athletics director Hunter Yurachek said in a statement. “Our focus has and will continue to be helping ensure that every student-athlete, who exhausts his or her eligibility at the University of Arkansas, leaves our program with a degree.

“Thanks to the dedicated efforts of our student-athletes, coaches and members of our academic support team, our program continues to achieve program bests in NCAA graduation success rate and other academic benchmarks. We still have room to grow as we continue to work to position our student-athletes for success today and in the future.”

Arkansas was one of 11 SEC universities that improved their overall GSR score or remained the same as last year. Missouri’s score fell four points from last year and Mississippi State and Georgia fell by one point apiece.

Vanderbilt, the conference’s only private university, had the highest overall GSR score of 97, followed by South Carolina (96), Alabama (93) and Auburn (93).

The UA men’s basketball program saw a steep drop to a score of 64 — the lowest among SEC teams in the latest reporting period. That score reflects the graduation rates for players signed by former coaches John Pelphrey and Mike Anderson who were freshmen between the 2011-12 and 2014-15 seasons. Anderson was hired to replace Pelphrey in 2011.

The basketball team had a 15-point improvement to a score of 77 in last year’s reporting period. Because there are significantly fewer basketball athletes, GSR scores in basketball are more prone than football to have sharp swings.

Arkansas baseball had a score of 86 in the latest GSR period, down from a program record of 89 last year. The latest figure reflects the rate for newcomers on Dave Van Horn’s teams between the 2012-15 seasons.

GSR is one of two annual report cards issued by the NCAA to track academic trends in college athletics. The Academic Progress Rate (APR) focuses on athletes' eligibility and retention during four-year and single-year periods.