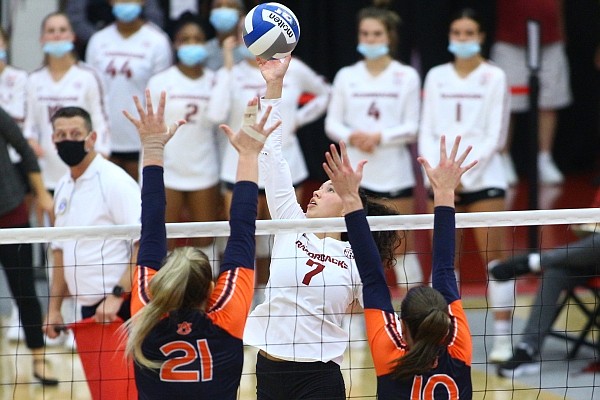 Arkansas sophomore Taylor Head (7) dinks it over the net and past Tatum Shipes (21) and Jackie Barrett (10) on Sunday, Oct. 10, 2021, during play at Barnhill Arena, Fayetteville.

FAYETTEVILLE — Coach Jason Watson acknowledged his University of Arkansas volleyball team probably still doesn't understand why it was left out of the NCAA Tournament, but the players are moving forward and happy to be still be playing in the postseason.

The Razorbacks (19-10) were among the first four teams left out of the tournament for the second consecutive year, according to tournament officials on last weekend's selection show.

"I'm crushed for our team," Watson said. "I just think what is hard to explain to our team is how we beat South Carolina and we beat Ole Miss ... They're not dialed into strength of schedule and RPIs and that kind if stuff. What they're dialed into is we beat them in three and we beat them at their place."

South Carolina and Ole Miss made the tournament field despite losing to Arkansas. Both Arkansas and Ole Miss finished with 10-8 SEC records, but Arkansas swept the Rebels in Oxford, Miss. in their only meeting. The Rebels' RPI of 44 was 10 spots better than that of the Razorbacks.

South Carolina finished 14-14 overall and 6-12 in league play. The Gamecocks lost 3-0 to the Razorbacks in the final regular-season match of the season.

Instead, the Razorbacks will be part of the 31-team National Invitational Volleyball Championship. Arkansas is the only team to receive a first-round bye and will take on Stephen F. Austin on Saturday at 7 p.m. in Nacogdoches, Texas.

The Razorbacks defeated Stephen F. Austin 3-1 earlier this season at the Tulsa Invitational.

The NIVC was revived in 2017 after a 22-year hiatus to provide an additional postseason opportunity for Division I teams. Georgia Tech won the tournament in 2019, but it was not contested last season because of the pandemic.

The Razorbacks haven't been in the postseason since losing to Creighton 3-1 in the NCAA Tournament in 2012. Their last postseason win came in 2005 against St. Mary's. It will be their third appearance in the NIVC and first since 1995.

Watson said other teams have used this type of experience to propel them forward, including the Arkansas women's basketball team. With the nucleus of his team returning, he said he felt like it could be great experience for his group.

"A lot of teams have used it to leap-frog forward into the [NCAA] tournament," Watson said. "Coach [Mike] Neighbors did it in women's basketball and Georgia Tech did it in volleyball. ... We don't want to do this every year. It's not the goal, but it's a great opportunity. There's a lot of good things that can come out of this that can prepare us 2022."

Watson said he is convinced his team is bought into the experience despite the disappointment of not making the NCAA Tournament.