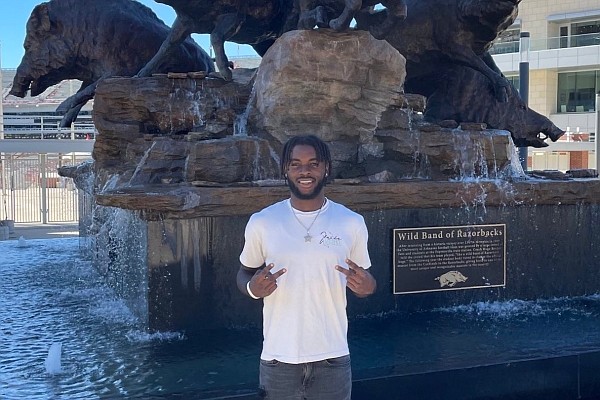 The University of Arkansas is expected to host at least three official visitors this weekend, and the Hogs get a second chance to host highly regarded receiver Sam M’bake when he arrives today for his visit.

He made an unofficial visit to Arkansas for the Auburn game on Oct. 16 and will be accompanied by two uncles on this weekend’s trip.

North Cobb Coach Shane Queen said M’bake is the kind of receiver who will line up opposite of SEC defensive backs every Saturday.

“First of all he has an SEC prototype body,” Queen said. “He’s a long wideout that you see everyday on Saturdays. He’s a very physical blocker, he’s a very physical kid and then he’s fast enough to run by corners so to me he’s an all round guy.”

Queen believes M’bake’s talent is still in the development stage.

“His potential is out the roof,” Queen said. “Sometimes as a high school player you wonder if a kid is fully developed and how much better is he going to get in college. He’s a great football player but his potential and ceiling is very high.”

His catching ability is remarkable as is his ability to stretch the field vertically,” Lemming said. “He’s blessed with pure speed, runs perfect routes, and can catch the ball in traffic. He’s a pro at catching the short pass and turning it into a long gainer.”

M’bake has a 3.1 grade-point average and is looking to major in business finance. Queen is also high on M’bake’s character.

“He’s one you would take home with you,” Queen said. “He’s a hard worker. He’s a kid that loves football and needs football. He’s been in our program two years now so a kid you’re going to sorely to miss as a worker in your program that you say this is what you can be if you put some hard work into it. He does job in the class room. Very smart young man.”

“All gas, no brakes,” said Queen in describing Arkansas’ recruiting of M’bake. “Coach Briles has been in here to see him and coach Guiton was here. Love to see the excitement of what’s going on in Fayetteville. Whenever everybody in the SEC is good, it makes football better.”

M’bake has been selected to play in the 2022 All-American Bowl in San Antonio on Jan. 8 and will announce his college decision during the game.

Two other Arkansas pledges also will visit this weekend. Little Rock Parkview running back James Jointer is expected to arrive in Fayetteville today, while Joe T. Robinson offensive lineman E’Marion Harris will arrive on Saturday after the Senators’ Class 4A semifinal playoff game at Warren tonight.