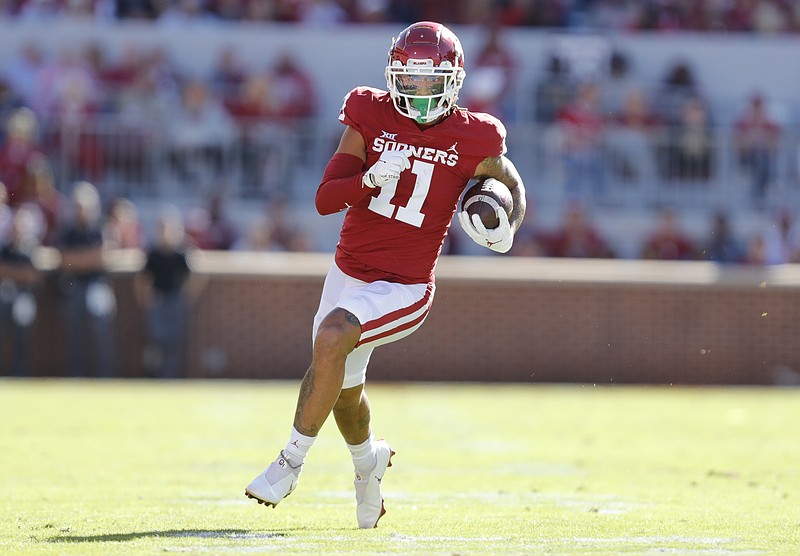 Oklahoma wide receiver Jadon Haselwood (11) runs for a first down during the first half an NCAA college football game against Oklahoma, Saturday, Oct. 30, 2021, in Norman, Okla. (AP Photo/Alonzo Adams)

Arkansas is expected to host former 5-star and Oklahoma redshirt sophomore receiver Jadon Haselwood for an official visit this weekend.

He announced Monday on his Instagram account that he was entering the NCAA transfer portal. He's expected to begin his visit Friday.

He signed with Oklahoma on Jan. 5, 2019, and enrolled at the school the same month. He chose the Sooners over Georgia, Miami, Florida State, Alabama, Auburn, Clemson, Florida, Michigan and numerous other programs.

ESPN rated Haselwood a 5-star prospect, the No. 1 wide receiver and the No. 6 overall prospect in the nation for the 2019 class.

He caught 39 passes for 399 yards and 6 touchdowns this past season for the Sooners and recorded 19 receptions for 272 yards and 1 touchdown as a redshirt freshman. Haswelwood had 62 catches for 736 yards and 7 touchdowns in his 3-year career.

If he enrolls at Arkansas, Haselwood would be the first 5-star receiver to play for the Razorbacks in the modern recruiting services era.