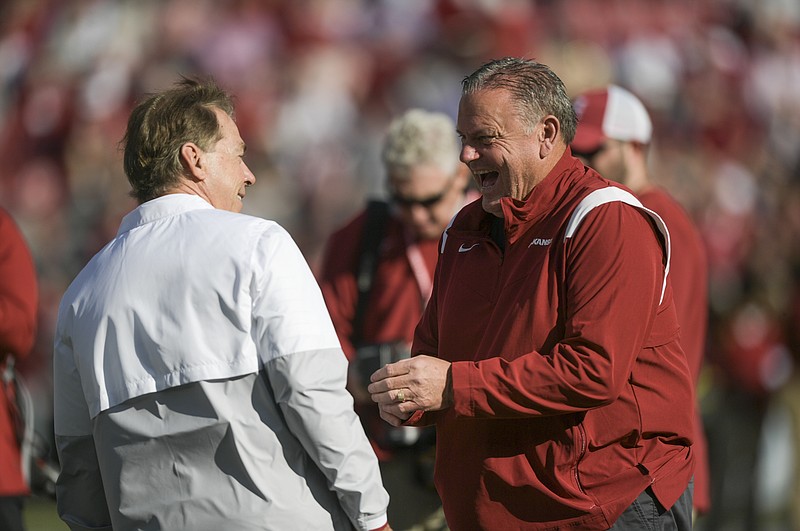 FAYETTEVILLE — University of Arkansas Coach Sam Pittman might have the most unique perspective on the SEC Championship Game of any coach not participating in Saturday’s 3 p.m. Central matchup between No. 1 Georgia and No. 3 Alabama in Atlanta.

Pittman worked four years at Georgia as offensive line coach from 2016-19 for Kirby Smart, and he has prepared teams to face Alabama and Coach Nick Saban in eight of the last 10 years.

Plus, the Razorbacks joined Auburn, Florida and Tennessee as the only teams who played both the Bulldogs (12-0) and the Crimson Tide (11-1) this season.

All of those schools went 0-2 against the division winners, though Auburn held a 10-0 lead over Alabama in the fourth quarter and took the Tide to four overtimes before falling 24-22 on Saturday.

Arkansas is the only team to play both Alabama and Georgia on the road, and both teams were ranked No. 2 at the time. Those were key components in an Arkansas schedule that was rated the nation’s toughest in 2021.

Pittman, the second-year Razorbacks coach, has vast knowledge of the personnel and schemes for both programs heading into the third post-season showdown in the last five years between Saban and his protege’ Smart.

Pittman was asked for a comparison between the Bulldogs and Crimson Tide after his team’s 42-35 loss at Alabama two weeks ago, and he wasn’t ready to dive into that question.

“Ahhh, I don’t … I think it’s a really good question, I just really don’t want to answer it,” Pittman said before relenting a little.

Pittman’s assessment is dead on as it relates to those teams’ offensive approaches against Arkansas.

In a 37-0 loss at No. 2 Georgia on Oct. 2, Arkansas allowed 273 rushing yards and 72 passing yards to the Bulldogs, who jumped ahead 21-0 with the help of a blocked punt touchdown in the early going and kept things on the ground almost exclusively in the second half.

Alabama took a much different approach, though the Tide racked up a ton more yardage in the shootout at Bryant-Denny Stadium.

Quarterback Bryce Young passed for 559 yards, the second-highest total in SEC history, and the Crimson Tide amassed 112 rushing yards while outgaining the Razorbacks 671-468.

Smart is aiming for his first victory over Saban, but he can’t take the title of first Saban assistant to beat him. Texas A&M’s Jimbo Fisher nabbed that accolade on Oct. 9 in a 41-38 win over the Crimson Tide which snapped Saban’s incredible 24-0 record against his assistants.

Smart’s team is favored by 6 1/2 points and for good reason. Georgia is the first team in Associated Press Top 25 poll history to receive every first-place vote for eight consecutive weeks.

The Bulldogs won their SEC games by an average margin of 40-8, a seldom-seen dominance in the nation’s best conference. Alabama’s average score in conference games was 37-23.

Auburn had the best scoring differential in its two games with Georgia and Alabama, falling by a combined 26 points. The Gators were next, losing by a combined 29 points (including a 31-29 setback in Tuscaloosa, Ala., on Sept. 18 before their season began to unravel.

The Bulldogs and Crimson Tide downed Arkansas by a combined 44 points, followed by Tennessee’s aggregate loss by 52 points to the pair.

Alabama has been ripping it through the air behind Young, a Heisman Trophy contender, Young with an average of 341.8 passing yards per game, but the Tide will face the nation’s No. 1 defense on Saturday.

Georgia senior quarterback Stetson Bennett has clearly improved from last season and has held off JT Daniels to maintain the starting job. Bennett struggled in a 41-24 road loss to Alabama last season. He completed 18 of 40 passes for 269 yards, with 2 touchdowns and 3 interceptions and was clearly trying to do too much.

“I think he’s really smart,” Saban said. “He sees what the defense is going to do. He gets the ball out of his hands very quickly to the right guys for the most part. And I think those things sort of just develop with knowledge and experience. I can definitely see how that’s benefited him in terms of the consistency that he’s played with this year, because he’s been outstanding.”