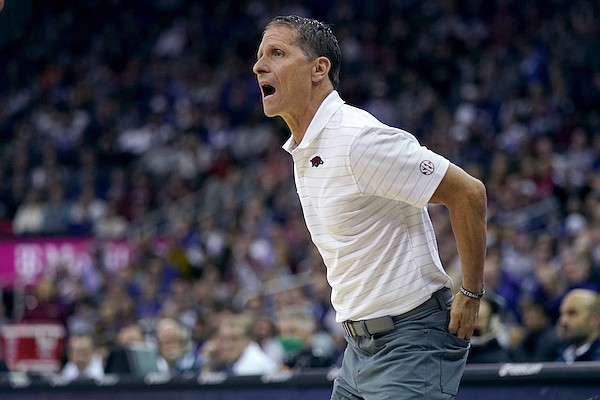 There are eight members out of 350 jobs.

Two of those eight will coach against each other today in Walton Arena when the No. 10 Arkansas Razorbacks (7-0) and UALR Trojans (4-4) meet for the first time in a regular-season game.

More from WholeHogSports: How to watch and listen to Arkansas vs. UALR

Eric Musselman is in his third season as coach at the University of Arkansas.

Darrell Walker, a former All-American guard for the Razorbacks, is in his fourth season as coach at the University of Arkansas at Little Rock.

Arkansas is the only state with two colleges that have former NBA coaches running programs.

“It’s kind of a, ‘Wow!’ ” said Joe Kleine, the former Arkansas All-Southwest Conference center who played 15 seasons in the NBA and was an assistant coach at UALR. “NBA coaches becoming college coaches is not the standard, but we have two in our smaller state.

“That to me is pretty cool. I’m glad they’re in our state.”

Musselman and Walker took different routes to landing their current college jobs than the other six on the list.

Calipari, Hamilton, Pitino, Hoiberg and Theus were successful college coaches first who then landed NBA jobs and eventually returned to college. Pitino coached in Greece between jobs at Louisville and Iona.

Woodson was an NBA head coach, then an assistant when he got hired by Indiana, his alma mater.

Musselman and Walker were both NBA coaches — Musselman with the Golden State Warriors and Sacramento Kings and Walker with the Toronto Raptors and Washington Wizards — before they overcame challenges to get college jobs.

“Athletic directors, for the most part, don’t respect what goes on at the NBA level,” Musselman said. “I found that out through a lot of interviews.

“Obviously, I’m lucky that I found someone that does respect the NBA and understands what goes into it.”

“It was very humbling,” Musselman said. “I don’t think there’s anybody that’s been a head coach of an NBA team and thinks, ‘Well, my next move is going to be a college assistant.’ It just doesn’t happen.”

Walker said it was tough to get an interview for a Division I coaching job.

Walker said a common knock he heard about his ability to coach in college was not knowing the NCAA rules.

“Somebody would say, ‘You have to learn all the college rules, and that’s going to be tough,’ ” Walker said. “I’d laugh and say, ‘You’ve got guys who have been coaching in college for 35 years and they’re still breaking the rules.’ “

When Walker couldn’t get hired as a Division I head coach, he applied for a job at Division II Clark Atlanta University and was hired for the 2016-17 season.

“I got a lot of backlash from some of my friends in the NBA,” Walker said. “They said, ‘You’re going to kill your career. What are you doing going down to that little school to coach? What’s wrong with you?’

“I just rolled my sleeves up and was determined I was going to make it work.”

Walker laughed when he recalled some athletic directors questioning if he’d be able to handle bus trips.

“At Clark Atlanta we took long bus rides late at night,” Walker said. “I was up at 2 o’clock in the morning talking to the bus driver and making sure that he’s staying awake.”

Walker went 45-18 in two seasons at Clark Atlanta with back-to-back NCAA Tournament appearances and was hired at UALR.

Coaching the Trojans was a dream job for Walker because he and his wife, Lisa, have made Little Rock their home since they married in 1987.

“When I sat down with the athletic director and the president at Clark Atlanta who hired me to tell them I was leaving for another job, I broke down in tears,” Walker said. “That’s how much Clark Atlanta meant to me, giving me the opportunity to build a program.

“It was tough to leave, but I was going back home to Little Rock where my wife and grandkids are, so it was a no-brainer.”

Before getting college head coaching jobs, Musselman and Walker both got questions about how they would adjust to not flying on chartered flights as NBA teams do, not staying in five-star hotels or having $150 per diem for meals.

“I think Coach Walker proved by taking the route he did that he just wanted to coach and have an impact on student-athletes, which is the same thing with me,” Musselman said. “We would probably go coach anywhere — coach on the moon if it meant you could be a head coach and go and compete.

“That’s the type of guy that he is. I’m not surprised that he took the route that he did, and not surprised by the success that he’s had either.”

Walker is 92-68 in six seasons as a college coach, including a 21-10 record in 2019-20 when he led UALR to the Sun Belt championship before the season was shut down by the coronavirus pandemic.

Musselman is 162-53 in six seasons as a college coach, including 52-19 in three seasons at Arkansas, with four NCAA Tournament appearances. Last season he led the Razorbacks to their first Elite Eight since 1995.

“Eric sucked it up, became a college assistant coach, got the job at Nevada and he’s never looked back,” Walker said. “And I haven’t looked back since I was at Clark Atlanta.

“We both have taken different routes to become college head coaches where we are today, but it worked for us. They were great routes for us.”