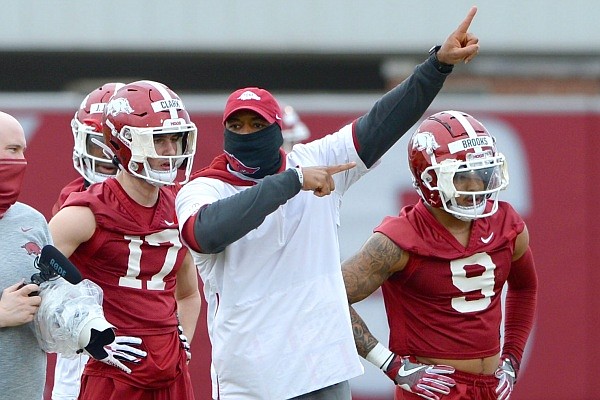 Arkansas assistant coach Sam Carter works with players on Thursday, March 11, 2021, during practice at the university practice facility in Fayetteville.

“He's a great guy and I just wanted to come see how everything was,” Welch said.

Welch, 6-1, 175 pounds, of Lafayette (La.) Acadiana, arrived in Fayetteville on Saturday to visit the Razorbacks and left shortly after noon on Sunday.

He committed to the Tigers in January over schools such as Arkansas, Texas, Texas A&M, Oklahoma, Georgia, Alabama, Tennessee and Colorado.

The highlight of his “great visit” was seeing the love the Razorbacks fans have for Coach Sam Pittman and the football program.

"The basketball game and seeing how much the fans care, like when Coach Pittman walked in and all the fans were screaming and everything,” Welch said. “Basically that's the only team in Arkansas, so fans love it here.”

Welch plans to announce his final decision on Dec. 15, the first day of the early signing period. If he does flip to the Razorbacks, it will be because of Carter.

He explained why the connection with Carter is so good.

He has known Carter since his sophomore season when he received his offer from the Razorbacks. Welch appreciates Carter staying after him despite his pledge to the Tigers.

"It just shows me how bad he wants me,” said Welch, who was hosted by defensive back Malik Chavis. “It shows how bad the program wants me."