Toney delivering for Hogs early on 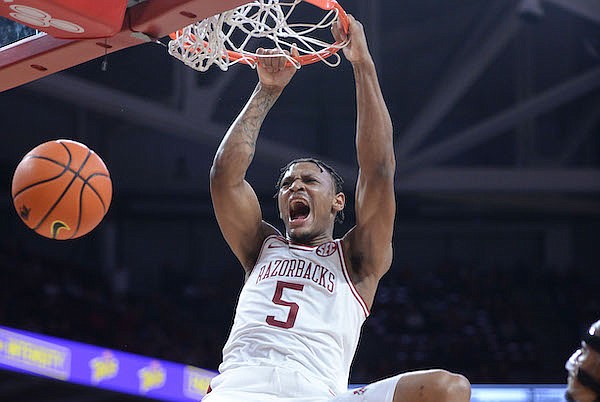 Arkansas guard Au'Diese Toney dunks the ball during a game against Mercer on Tuesday, Nov. 9, 2021, in Fayetteville.

FAYETTEVILLE — In three seasons at Pittsburgh, shooting three-pointers was a big part of Au’Diese Toney’s game.

Playing for the University of Arkansas this season as a senior graduate transfer, the 6-6 Toney has become more of an inside force.

WHAT No. 10 Arkansas vs. Charlotte

Toney came into this season as a career 46.4% shooter in 79 games at Pittsburgh.

“I’m not surprised as much, because it’s the amount of work,” Toney said of raising his shooting percentage with the Razorbacks. “Like Coach [Eric Musselman] says, the amount of work you put in is going to come to light.

“Day in and day out, I’m just staying in the gym and being consistent. It’ll show up.”

This season Toney has 30 layups to account for 75% of his made baskets. He also has five dunks, has made 3 of 5 three-pointers — 0.09% of his shots — and two jumpers inside the lane.

Toney’s scoring average is at 14.0 points after he scored 18 in the Razorbacks’ 93-78 victory over the University of Arkansas at Little Rock on Saturday.

“It was just paint touches,” Toney said. “Just attacking the paint and getting easy points. They’re always watching the ball, so it’s a lot of back cuts.”

Toney has scored 13 times on cuts to the rim.

“He does a great job of cutting, catching in traffic and finishing or drawing fouls,” Musselman said. “So he’s as valuable to us really as anybody right now.”

Toney has hit 29 of 40 free throws — the second-most attempts for the Razorbacks behind senior guard Chris Lykes, who is 40 of 48 and often handles the ball in late-game situations to draw fouls.

Lykes hit 18 of 20 free throws to help Arkansas beat Kansas State and Cincinnati to win the Hall of Fame Classic championship in Kansas City, Mo., but Toney was the tournament MVP with 32 points and 18 rebounds. All 10 of his baskets against the Wildcats and Bearcats were layups, often in heavy traffic.

“It was a big jump, but at the end of the day you’ve got to know how to do different things, to know how to score without having the ball in your hands,” Toney said of his adjustment from Pittsburgh to Arkansas. “Coach Muss showed me during the summer time the right way to play and to move without the ball and you can get easy points like that.”

Toney hit 6 of 7 shots against UALR and had eight rebounds.

“He’s a junkyard dog,” said Trojans Coach Darrell Walker, a former All-American guard at Arkansas. “I’d love to have a guy like that.

“You don’t have to call any plays for him. He just gets it within the system.

“That’s a great pickup by Muss. He’s a really good basketball player, man. He really is. He’s kind of the glue guy on this basketball team. He’s solid.”

Toney is averaging 6.8 rebounds to rank second on the team behind 6-10 Jaylin Williams at 8.8. Toney is fourth on the team with nine assists and tied for fifth with six steals.

Five of Toney’s baskets are on offensive rebounds. Against UALR he missed a free throw on a three-point play attempt, then hustled to get the rebound and scored his second basket within a four-second span.

“The stuff that he does, I mean, it’s not glamorous,” Musselman said. “It’s basically stuff that just wins basketball games and quite honestly, that’s what he loves to do — is just win.”

Musselman has said repeatedly the Razorbacks never draw up plays for Toney.

“It’s a great lesson for any player at any level, whether it’s third-grade CYO or YMCA ball or high school or whatever,” Musselman said. “You don’t need plays run for you to score if you cut hard and play hard and offensive rebound and you find open holes in the defense.”

Toney said he’s fine not having plays called to set him up for shots.

“It’s just having an awareness of the game,” Toney said of getting baskets on cuts, offensive rebounds snd in transition. “When you do get the ball, take advantage of it. That’s pretty much it.

“You really can score however much you want to score if you just play the game right.”