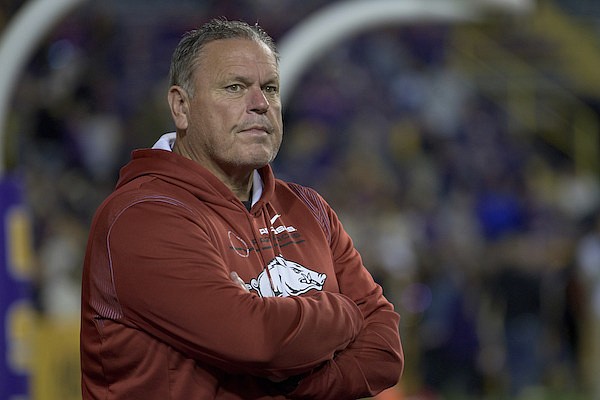 FAYETTEVILLE — Sam Pittman’s turnaround tale at the University of Arkansas earned the second-year coach a national nod on Monday.

Pittman was named by the American Football Coaches Association as its Region 2 coach of the year. The Razorbacks are 8-4 and headed to the Outback Bowl for a matchup with Penn State on New Year’s Day.

Pittman guided Arkansas to a 4-4 mark in the rugged SEC West, the program’s first .500 record in league play since the 2015 team, for which Pittman served as offensive line coach, went 5-3 against conference opponents.

Pittman, who turned 60 two days after the Razorbacks wrapped the regular season with a 34-17 win over Missouri, is now in the running for the AFCA’s National Coach of the Year as one of five regional winners.

The Razorbacks rose to No. 8 in the nation in late September after their 4-0 start, which included wins over Texas A&M and Texas.

Pittman is one of 14 SEC coaches in history to take over a team with a sub-.500 record and lead it to a spot in the top 10 in The Associated Pres poll within his first two seasons.

Pittman and Arkansas Athletic Director Hunter Yurachek had a brief conversation with Outback Bowl president and CEO Jim McVay on Sunday in which McVay seemed to presage the recognition for Pittman.

“You’ve had a tremendous year,” McVay said. “Great job coaching. You should be named coach of the year.”

More from WholeHogSports: Hogs come long way to get to Tampa

There are Arkansas and Pittman connections all over the list of regional coaches of the year.

Pittman was Arkansas offensive line coach from 2013-15 under Bret Bielema when the Razorbacks’ offensive front drew national recognition as the biggest in American football. The starting five of Springdale’s Mitch Smothers, guards Frank Ragnow and Sebastian Tretola, and tackles Denver Kirkland and Dan Skipper were the cover boys on the 2015 Arkansas football media guide.

Pittman is 11-11 in two seasons with an Arkansas program that had lost 19 consecutive SEC games when he took the head coaching reins in December 2019.

Fickell’s Cincinnati Bearcats were selected on Sunday to play in the College Football Playoff to become the first Group of 5 program to earn that distinction. The Bearcats (13-0), who face defending College Football Playoff champion Alabama in the Cotton Bowl on Dec. 31, are scheduled to open the 2022 season at Reynolds Razorback Stadium on Sept. 3.

Pittman and Tucker worked together on Georgia Coach Kirby Smart’s staff from 2016-18, when Tucker took his first head coaching job at Colorado.

Traylor served two years as running backs coach at Arkansas (2018-19) and tutored Rakeem Boyd and Trelon Smith, two of the Razorbacks’ most productive players the last three years, during his tenure here. His offensive coordinator with the Roadrunners, who are 12-1 heading into the Dec. 21 Frisco Bowl against San Diego State, is former Arkansas quarterback Barry Lunney Jr., an assistant coach with the Razorbacks from 2013-19.

Anderson led Arkansas State University to a 51-37 record from 2014-20, one of the most productive and stable runs in recent decades for the Red Wolves. Arkansas State won back-to-back Sun Belt titles in 2015-16 and broke 12 school records under his watch while playing in six consecutive bowl games.

His current Utah State team is 10-3 and champions of the Mountain West Conference after crushing San Diego State 46-13 in the conference title game last Saturday. The Aggies take on Oregon State on Dec. 18 in the LA Bowl in Inglewood, Calif.

Pittman is the fifth Arkansas head coach to lead the Razorbacks to bowl berths in each of his first two seasons, joining John Barnhill (1946-47), Lou Holtz (1977-78), Ken Hatfield (1984-85) and Houston Nutt (1998-99). The Razorbacks accepted a berth to last season’s Texas Bowl against TCU before covid-19 issues on the Horned Frogs roster caused a cancellation of the game in Houston.

Pittman’s Razorbacks snapped all kinds of streaks in 2021 and also notched a 40-21 upset of then-No. 15 Texas that helped the Razorbacks surge to No. 8 in the AP Top 25.

Arkansas collected all three of its rivalry-game trophies this season with wins over then-No. 7 Texas A&M (20-10) in Arlington, Texas, at LSU (16-13, overtime) in Baton Rouge, and Missouri (34-17) at Reynolds Razorback Stadium.

The quintet of regional coaches of the year will be honored on Jan. 9 at the 2022 AFCA Coaches Convention in San Antonio, Texas, where the overall winner will be announced.