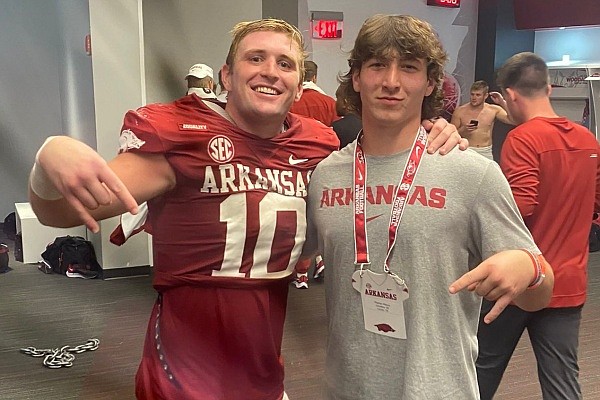 Arkansas linebacker and Lovejoy product Bumper Pool with linebacker target Payton Pierce as they celebrate the Razorbacks' win over Texas.

Arkansas linebackers coach Michael Scherer made his second trip to the Dallas area to check on 2024 linebacker target Payton Pierce on Saturday.

Pierce, 6-2, 225 pounds, of Lovejoy High School in Lucas, Texas, took on South Oak Cliff in the 5A-II Region II final at Frisco’s Ford Center with Scherer on the sidelines.

“I was pumped that he came,” Pierce said. “I was playing injured and wish I would have been healthy and made a better showing, but I was super grateful that he cared enough to come watch. Coach Scherer has been awesome and I am thankful of how consistent he has been in keeping track of myself and our team.”

Pierce was a tackling machine for the Leopards. He recorded 131 tackles, 21 tackles for loss, 7 sacks,  5 forced fumbles and 10 pass breakups this season while helping Lovejoy to a 12-2 record. He also had 10 rushing touchdowns and 2 passing touchdowns out of the Wildcat formation.

He caught the Razorbacks in action against Texas and Texas A&M this season. Pierce has offers from Arkansas, Virginia Tech, Missouri and Tulsa.

While he and the Leopards had a successful season, he is not satisfied.

“The most important stat needs to say 16-0 state champs,” he said. “We’re going to do that next year.”