Burks leaves as an all-time great 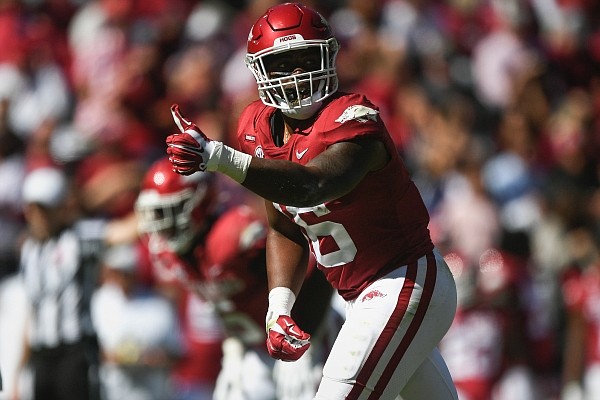 Arkansas receiver Treylon Burks gestures toward an official on Saturday, Oct. 16, 2021 during the third quarter of a football game against Auburn at Reynolds Razorback Stadium in Fayetteville.

But what if you just say best player at any position? You can throw in Wayne Harris (El Dorado), Leotis Harris (Little Rock Hall), Shawn Andrews (Camden Fairview) and Wayne Martin (Cross County). All of them were great in college and professional football.

Burks is as good as any of them. It’s the same with Burks as all of those mentioned in this space: a man playing with boys.

Some think he’s the best all-time to play for the Razorbacks among wide receivers. I’d probably rate him first on my list.

Some will remember the extraordinary one-hand grabs and one toe taps just in front of the white line as confirmation of his greatness. But the play he made against Alabama last month will be the one that probably plays over and over as the NFL draft is previewed over the next five months.

It’s hard for me to get that play out of my mind. Alabama’s entire secondary had a shot at catching Burks on the 66-yard touchdown catch and run. They lost ground.

I have no problem with Burks deciding to skip the Outback Bowl game with Penn State to protect his health ahead of the spring draft. He’s likely a first-round draft pick. He played with nagging injuries all season, helping the Hogs to an incredible 8-4 season, 4-4 for third in the SEC West. He earned first team All-SEC honors from the coaches.

At 6-3, 225 pounds and with unbelievable speed and skills, Burks could go as high as the middle of the first round, depending on how he fares with three or four other gifted wideouts at the spring combine.

But if he slides all the way to the bottom of the first round, say the 30th pick, that’s still fantastic.

That’s what Burks discussed with legendary Warren High School coach Bo Hembree last week as the Lumberjacks were preparing for a semifinal game in the state playoffs. Burks sought advice from the best mentor in his camp and headed to Warren.

“He asked me to meet him at the fieldhouse when he came home,” Hembree said. “He was having a really tough time deciding on what to do about (playing in the bowl game). He really wanted to play.

“I think what got him was when (Alabama receiver) John Metchie tore his ACL (in the SEC Championship Game). He wanted to play until then. That was tough.”

Hembree looked at last year’s first-round payouts to provide perspective on the decision.

“Jarius Wright got $400,000 to sign in the fourth round,” Hembree said of another former Warren great. “But I went to Google and looked at last year’s first-round money. It’s generational money.”

There are some who don’t seem to care and are disappointed Burks isn’t playing in the bowl. Don’t include me. I’d tell my son to rehab the injuries that slowed him all season and prepare for the combine in hopes of locking up that guaranteed money.

That Burks is in this position makes Hembree and the rest of Warren so proud. There have been lots of great players in the Lumberjack program in the 21 years under Hembree, but Burks might be the favorite son for the community.

All have conducted themselves in an extraordinary way. They come back to support the team. They are often in the locker room before big games, as were Burks and Wright before the game against Joe T. Robinson in the semifinals.

“That’s what makes our program,” Hembree said. “Our kids want to be like these guys. They see them. They come back.

“It started with Brett Smith, Roshawn Fellows and Terrance Hampton. We’ve always had guys come back. Greg Childs, Jarius Wright and Chris Gragg are like that, too. They still come back.”

Hembree marvels at Burks’ accomplishments at Arkansas, but none of it surprises. That he had 1,104 yards receiving this year on the way to first team All-SEC is incredible, but expected nonetheless.

“Just like that play against Alabama, when no one touched him, we’ve seen that kind of stuff all his career,” Hembree said. “It’s all remarkable. I say that because everybody knows he’s getting the ball, and he still does it, just like it was in high school when everybody knew we were going to give him the ball.

“It’s high school all over again in our eyes.”

Hembree has told the Burks story over and over. He’s getting lots of calls this week. He doesn’t mind.

“We first began to notice him when he was in the third grade,” Hembree said. “He was our ball boy. That was around the time when we had Chris, Jarius and Greg.

“Our ball boys went out with the specialists in warmups and he would catch punts, kickoffs and the field goals. I didn’t see him do it at first, but my coaches would tell me, ‘Coach, go watch this kid.’

“He was catching the ball like you saw him two years ago at Arkansas, over his head. He just had incredible ball skills at an early age. He was crazy good. You knew he had a chance to be a good player.”

But he didn’t know he was destined to be an offensive star. Hembree said Burks was a stud on defense first.

“And he liked it all. He just worked so hard.”

Hembree pulled him up to the high school team as a ninth grader.

“We were not in a run to the state championship that year,” he said. “So we could afford to look at him with the high school team.”

There was a special moment to start his sophomore year that no one in Warren will ever forget.

“He broke his hand Week 2 at Stuttgart,” Hembree said. “So we went to Little Rock (to the doctor) and they put a cast on it all way to the elbow.

“That week we were playing Watson Chapel. We decided he’d just play defense.”

Then the Lumberjacks got in a problem in the first quarter when some receivers went down to injury.

“We only had a 30-man roster,” Hembree said. “We just didn’t have any other receivers. We said he could play receiver and just run routes. You figure they’d at least have to cover him.

“But about as soon as we put him in, our quarterback got in trouble and started scrambling. Next thing you know, he throws one up on the sideline and (Burks) goes up and gets it with one hand.”

That was the start of an incredible night for Burks.

“He caught nine and for over 200 yards,” Hembree said. “I think there were three TDs, all of it one-handed.

“So when someone posts a video from a practice or a game with a one-hand catch, it’s nothing new for us. We saw it on a daily basis in practice from an early age.”

Burks has large hands. He fingers seem to reach around the ball and touch.

“They talk about getting him 5XL size gloves at Arkansas,” he said. “Try that at the high school level. We could hardly get them. And if we did, he’d wear them until they fell apart. So when we did get them for him, we took care of them.”

It isn’t just a big frame and hands; it’s incredible speed for that size.

“People always ask me about his speed,” Hembree said. “I just tell them, ‘He’s as fast as he needs to be.’ I’ve never seen him get caught.

“I remember when he was a sophomore with us he kept asking why we didn’t call bubble screens for him. He’d say, ‘You think I’m not fast enough?’ And so we got up on Dumas and we called it. He went 61 for a TD. He came to the sideline asking me, ‘Am I fast enough?’ He’s fast enough.”

It’s an incredible stride that the best cornerbacks in the SEC can’t match. It’s part of that rare talent that puts Treylon Burks squarely in the middle of the discussion of the state’s all-time best.