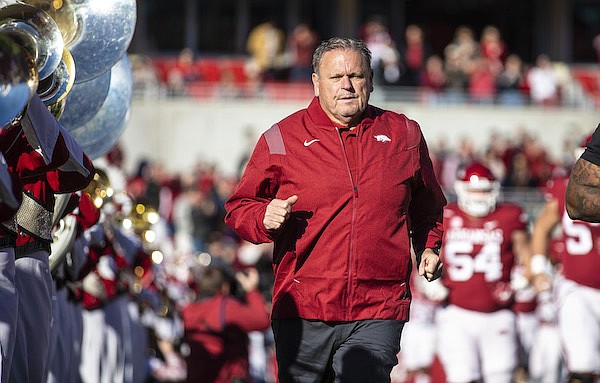 Sam Pittman, coach of the Razorbacks, runs onto the field on Friday, Nov. 26 2021, before the first half of play against Missouri at Reynolds Razorback Stadium in Fayetteville.

FAYETTEVILLE — University of Arkansas officials have received their first proposal for a reworked contract from Coach Sam Pittman’s new agent, the Arkansas Democrat-Gazette has learned, and the asking price is steep.

According to a source with knowledge of the proposal, Pittman’s agent Jimmy Sexton of Creative Artists Agency is asking for a seven-year deal worth $50 million plus, which would nearly double his current salary.

University of Arkansas Athletic Director Hunter Yurachek has acknowledged Pittman is due a raise after leading the Razorbacks to an 8-4 record and a berth in the Outback Bowl against Penn State on Jan. 1.

UA President Donald Bobbitt, interim chancellor Charles Robinson, the UA Board of Trustees and Yurachek will all have input on the upcoming negotiations.

Pittman, 60, improved to 11-11 in two seasons with the Razorbacks after leading Arkansas to a 34-17 win over Missouri in the Battle Line Rivalry game on Nov. 26.

Under his current contract, Pittman’s salary is set to increase from its initial starting point of $3 million per year to $3.75 million. Pittman received raises of $250,000 each for wins No. 6, 7 and 8 this season.

Pittman’s salary ranks 12th among the 13 SEC coaches at public institutions and likely ahead of Vanderbilt’s first-year Coach Clark Lea. A private institution, Vanderbilt does not make its salary figures public.

Among other SEC coaches hired in the 2019-20 cycle, Pittman is tied with Missouri’s Eli Drinkwitz in his record at his new school.

Kiffin leads that pack with a 15-7 mark in two years. He just received a new four-year deal that will take his base salary to $7.25 million in 2022.

Drinkwitz, also 11-11, just completed the second year of a deal that pays $4 million per season. Mississippi State’s Mike Leach, who is 11-12 with the Bulldogs, is working with a base pay of $5 million.

According to The Associated Press, Kiffin’s deal made him the fourth-highest paid coach in the SEC behind Saban ($9.75 million), Fisher ($9 million) and Brian Kelly ($8.6 million) who was recently hired at LSU.

Smart is likely in line to push into that top group after leading Georgia to a 12-1 record and a spot in the College Football Playoff along with Alabama, Michigan and Cincinnati.