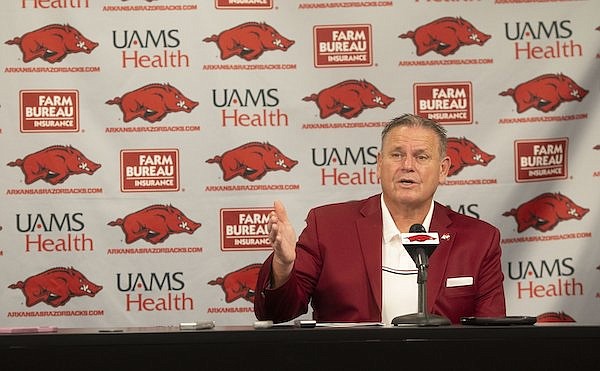 FAYETTEVILLE — All over the country on Wednesday, there were college football coaches celebrating their great recruiting classes and some even believe that assertion and weren’t just hyping it up.

Arkansas head football coach Sam Pittman was very even-keeled about a haul that was ranked as high as 12th nationally by Rivals and 18th by both ESPN and 247 Sports composite rankings.

The difference in those ratings being that Rivals has the Razorbacks with six four-star prospects, 247 Sports five and ESPN four.

It’s also a range of as high as fifth and as low as eighth among the 14 SEC teams.

Some 17-19 of those players will arrive on campus in January as early enrollees.

“I can remember, I don’t think it was too many years ago when if you got 1, you got 2 that graduated at Christmas, it was kind of a big deal,” Pittman said. “Now, I know it’s at least 17. I don’t know the number, I’ve been really, really busy today. But I think it’s between 17-19, and the number certainly can grow. You bring in 20 guys that you bring in the spring, you’re losing 20-something, you have a chance to continue to get better.”

Haselwood caught 62 passes for 436 yards and touchdowns in three years at Oklahoma (including a redshirt season when he played in only three games) while Jackson was limited to five games at LSU last season due to injury.

“I think you’re talking about two totally different guys,” Pittman said. “ In other words, Haselwood has played a lot. He’s older. Played a lot of ball. We need help at both those positions in my opinion. I don’t know, there’s probably guys out there that would disagree with me, but I think those two guys at their position are probably about as good as there is in the country in the portal at defensive end and at wide receiver.

“I’m very excited to get both of them because we’re expecting them to help us immediately.”

Arkansas is expected to add more players for next season either from the high school ranks or through the NCAA transfer portal and can bring on seven more and up to 28 total if current Razorbacks leave on after Dec. 15.

“Um, it’s difficult, but for me to sit here and think that we’re not going to have several guys go in the portal between now and the bowl and then after the bowl, I mean, I’m not really concerned about it,” Pittman said. “No I lied to you a little bit there, I’m concerned about it.

“But I’ll bet you before we get over with we’ll be under 85. It’s free agency out there. It’s wild right now. I mean it’s a ‘if I’m not starting I’m transferring’ world. I get it. It’s the ones who are starting for you that hurt you, that really hurt you.”

“You don’t want to lose depth at all. I worry all the time. I do. We have the board, do we have the numbers we need and all those things? But I’m about positive it’ll work itself out. I really think that.”

The final piece to come on board on Wednesday was Kennesaw (Ga.) North Cobb wide receiver Sam Mbake (6-3, 205). Mbake and fellow Arkansas wideout signees Isaiah Sategna and Quincey McAdoo said the way Burks was used was appealing. Pittman said the comparison to Burks for several high school players was a big deal.

“I imagine (it was) a lot,” Pittman said. “Obviously, not every one of them is going to be a slot receiver, but I think a lot. I think Burks’ numbers proved we’re willing to throw the football. With (starting quarterback) KJ (Jefferson), you have somebody who can throw the football.

“I think those are two of the biggest things kids look at is do you have someone that can get me the ball and are you willing to throw it around? Just the numbers alone this year on what Burks did, I do think that helped us, yes.”