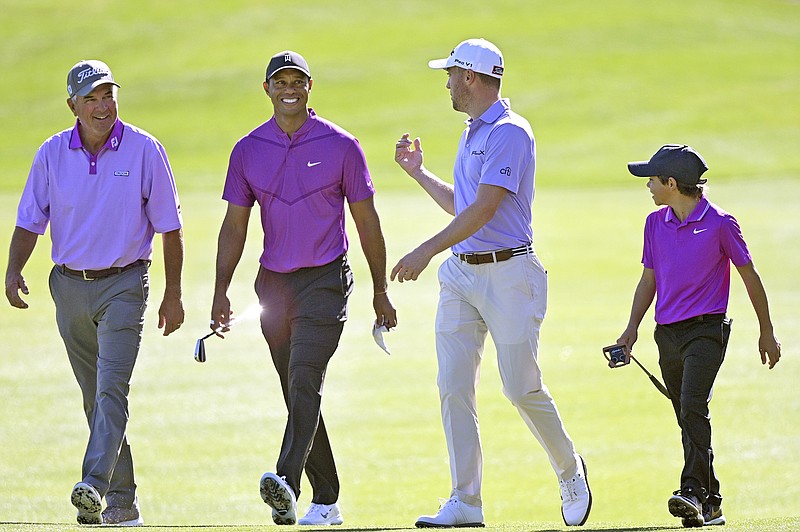 In this Dec. 19. 2020, file photo, Tiger Woods (second from left) and his son Charlie (right) walk with Justin Thomas (second from right) and his father Mike Thomas on the third fairway during the first round of the PNC Championship in Orlando, Fla. (Associated Press)

Because I’m not a confident flyer during the covid pandemic, there have been lots of long drives this season. It will be no different for the Outback Bowl. A two-day drive to Tampa, Fla., awaits.

It doesn’t help that my home in Norfork isn’t close to a full-service airport. By the time I drive to Little Rock or Highfill and make it through security, I’d be four or five hours into a trip.

After detailing my long drives to Athens, Ga., or Tuscaloosa, Ala., the most often question: How many George Strait tunes are played?

Plenty, but I do break away to my favorite satellite channel: PGA Tour Radio. Last year, I listened to the Masters on the three-day trip to Gainesville, Fla. But what I really enjoyed late this fall was when the various golf experts discussed Tiger Woods and his possible comeback after a February car wreck.

Most of them were way off, like many football experts last summer who predicted Sam Pittman’s second Arkansas team would be hard pressed to go 6-6.

Any that thought Tiger could no longer be competitive with a rebuilt right ankle must be eating their words after seeing him in the Friday pro-am at the PNC Championship in Orlando, Fla. He looked great.

Woods, playing with son Charlie, stunned the experts by smashing a 320-yard drive on the flat 11th hole at the Ritz-Carlton Course. It was breaking news on the Golf Channel coverage of the pro-am. Never have I seen someone laser shoot a distance of a pro-am drive and interrupt regular programming for an announcement.

But this was Tiger and the whole golfing world wanted to know. If they don’t show every shot he hits Saturday and Sunday, it will be a disappointment. I can recall some moaning about too much Tiger coverage a decade back. Not now.

Tiger gets to ride a cart, something that won’t be allowed if he tries to play at Augusta National Golf Club in the Masters. That tournament is set for early April, not too far away.

That’s notable because Augusta National is as hilly as they come. He’d have to walk five or six rounds, including a couple of practice rounds, although the pre-tournament work might be split into 9-hole stints.

Still, that’s what all the PGA Tour radio hosts have been saying was impossible for Woods. But more than that, no one expected Tiger to have the club head speed to hit the kind of drives needed to be competitive at the Masters. He does.

All of that went out the window when Woods smashed that drive on 11 in the lead-up to the PNC. He’s got a new driver with a carbon face that is likely to be the rage now that it’s in his bag. There was news that Tiger likes it as much because of the way he can work the ball as for the length of the drives.

I love the PNC. Yes, it’s just a “hit and giggle” scramble, lots of father-son combinations, although LPGA Tour star Nelly Korda plays with her father. There’s a Razorback connection with John Daly and his son, the UA freshman they call simply Little John.

Tiger has already announced that he will never be full time on the PGA Tour again. That was kind of the suspicion anyway — if he could indeed play again after the car wreck. There was some doubt in the early part of the rehab that he would walk again without a cane, much less play golf.

There will be times in the 36-hole tournament this weekend — coverage is on the Golf Channel and NBC — that Tiger skips a shot. It is said that there is limited energy in the tank right now. And Charlie, 12, is solid, with a swing that reminds of Tiger.

I watched almost all of the pro-am Friday because it was geared to the Tiger comeback. He didn’t always hit a drive, letting son Charlie first smash a perfect tee shot.

There was a wedge shot that Charlie hit to two inches on that 11th, playing his drive, 5 yards past dad’s massive drive from the back tee. Two holes later was a short par 4 that Tiger might have driven, but didn’t take a club out of the bag after Charlie muscled one within wedge distance.

Tiger has a slight limp. He definitely favors that right ankle as he moves about the fairway.

But I’m not going to rule him out for an April return to Augusta. We should know better by now to ever doubt Tiger. He said he’s taken zero days off in his rehab.

The swing is in perfect rhythm. There is plenty of power. Someone with more expertise than me might tell you otherwise, but Tiger looked awesome

None among the experts think Tiger and Charlie will win this week, but they might. The odds list them as seventh best among the betting favorites, well behind defending champs Justin Thomas and his father Mike. Team Daly is the fifth favorite, definitely a contender.

One betting expert suggested the Woods team sits that high in the odds because of emotion. There are many who pull (and bet) on Woods at almost any price now.

I can’t argue against that. As they say, never count out Tiger Woods. And, never bet against him.