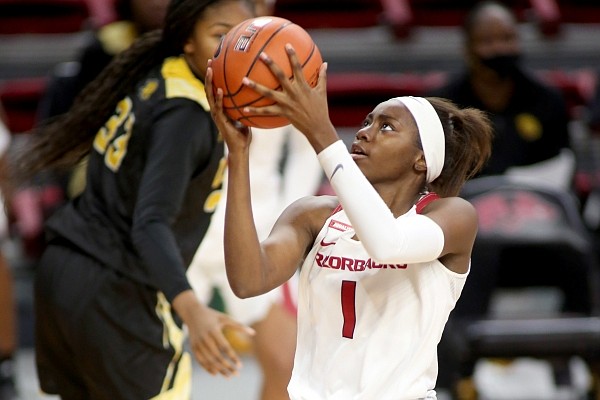 Davis posted to her Twitter account a photo of her in an Ole Miss uniform, announcing her commitment to the Rebels. It read, “Nothing can block what God has planned for me. #committed #HottyToddy #noceilings”

The announcement came less than two weeks after Davis said she would be leaving the Razorbacks and entering the NCAA transfer portal.

The 6-0 junior averaged 5.9 points and 2.4 rebounds in seven games, including one start, for Arkansas this season. Davis also averaged 12 minutes per game off the bench last year, playing in 26 of 28 games and averaging 4.6 points and 2.1 rebounds.

She will report to Oxford in January in time for the spring semester, but she will not be eligible until the 2022-23 season. Davis will have two seasons to play for the Rebels.

She averaged a 7A-West Conference-best 21 points and 10.2 rebounds per game for a 20-10 Springdale team as a junior. Davis moved to Springdale from McGehee as an eighth-grader and scored more than 1,000 points in her high school career.

Arkansas (10-2) finishes nonconference play by hosting Creighton at 1 p.m. Tuesday. It then opens SEC play at Ole Miss on Dec. 30.