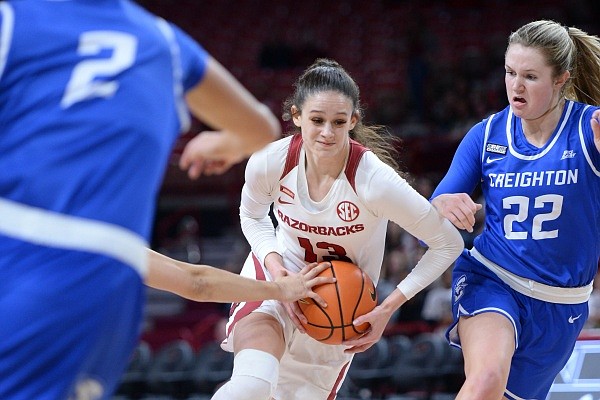 Arkansas guard Sasha Goforth dribbles into the lane on Tuesday, Dec. 21, 2021, against Creighton during the second half of the Razorbacks’ 81-72 loss in Bud Walton Arena in Fayetteville.

FAYETTEVILLE — Arkansas women’s basketball Coach Mike Neighbors said he and others go to clinics to hear Creighton Coach Jim Flanery talk about the motion offense. The Razorbacks got to see it firsthand Tuesday afternoon at Walton Arena.

The Bluejays grabbed the lead thanks to some red-hot three-point shooting in the first half, then picked apart the Arkansas defense in the final two quarters during an 81-72 win over the Razorbacks.

“They made us wrong all day,” Neighbors said. “And every time that we thought we had them for 17 or 18 seconds, they’d get us in the last three or four.

“We knew how good they were. If you’ve watched how they’ve played especially in the last five games, they’re starting to really click. … you can know it’s coming, you can talk about it, you can work on it. But guarding it is another whole thing.”

Creighton (8-3) hit 10 of 18 from beyond the three-point line to grab a 45-33 halftime lead and extended the advantage to as much as 20 in the final two quarters. Arkansas, which saw its four-game winning streak snapped, got no closer than nine in the second half.

Morgan Maly came off the bench to lead five Bluejays in double figures with 20 points on 8-of-13 shooting. The 6-1 sophomore was one of six Creighton players to make a three-pointer. The Bluejays hit 14 for the game, including five by Lauren Jensen and three by Maly.

They offset a game-high 34 points by Arkansas guard Makayla Daniels, which included 5 of 6 from three-point range. Daniels hit back-to-back three-pointers to get Arkansas within two early in the second quarter. But Creighton pushed the lead to double digits with a 9-2 spurt late in the half.

Daniels said the Razorbacks didn’t do enough defensively to keep the Bluejays out of rhythm, despite hitting 11 of 21 three-pointers.

“They did what they were comfortable with,” Daniels said. “We allowed them, for too long, to be comfortable. At times, we kind of made them uncomfortable but not long enough.”

Neighbors said the Razorbacks likely missed their chance early as Creighton started o for 8 from the floor. The Bluejays still led 16-13 after a quarter despite making just 4 of 15 shots.

“I thought we did a good job in the first quarter,” Neighbors said. “I just thought that we didn’t take advantage of that. We hold them to 4 of 15 and we’re hanging around, but we turn it over six times. We don’t give ourselves a chance to have a lead.

“Then I thought in the second quarter, they just started dominating. And then they just rolled. Then they get confidence. Then they start picking you apart and then they start setting you up and you can see it coming and you’re like ‘Oh no. Here it comes.’ And there’s not a lot you can do about it. All credit to them.”

Jensen added 15 points, all on three-pointers, and Rachael Sanders added 12 for Creighton, which has now won six of its past seven games. Carly Bachelor and Molly Mogensen chipped in 11 each.

Sasha Goforth and Jersey Wolfenbarger were both had 11 points each for Arkansas (10-3), while Samara Spencer added 10.

Arkansas was without Amber Ramirez, the lone senior on the roster, along with post players Erynn Barnum and Emrie Ellis because of injuries, which left the Razorbacks with just 10 available players. That led to more minutes for everyone than he wanted, Neighbors said.

Seven players saw action and four of them played 33 minutes or more.

“I don’t want to look down there and see 35s and 38s,” Neighbors said in reference to minutes on the box score. “We haven’t prepared for that. We worked then too hard probably in the offseason to be at 38 minutes tonight on December 22.”

The Razorbacks won’t play again until Dec. 30 when they open SEC play at Ole Miss. Neighbors said he is hopeful Ramirez will be back for that game. He also said Ellis is getting closer, but Barnum would not be ready for for the league opener.