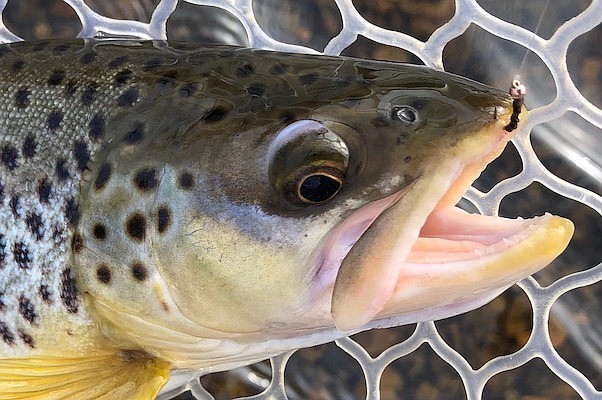 This is slippery slope. Writing about several good days fishing for brown trout produces phone calls from buddies. Where? What fly?

Hence, I’ve learned to proceed with extreme caution when writing about my fly fishing. You can go to a hot spot and find 10 people already there. I know better, but here goes, with limited detail.

Since the end of football season, there have been both warm days and low water. There are a few days off saved because printing 12 magazines means lots of seven-day working weeks when travel is included. Hawgs Illustrated is weekly during the fall, except for the open date.

The Norfork River is only 800 yards from my house, but I’ve fished the White more over the last month. I’ve caught lots of brown trout on my favorite fly, the root beer midge. Some days I’ve probably been close to double digits, but who counts?

This is the fly that Fayetteville’s David Knowles showed me about five years ago. My fly tying mentor picked it up from Mel O’Connor, like David a retired University of Arkansas professor. Writing a column about it sent a bunch of curious fly fishers to a couple of local fly shops and soon Knowles had huge orders to fill.

I fished with Knowles and O’Connor earlier this fall on the Beaver tailwater. I was fishing the root beer, the fly I thought they were most likely throwing. Little did I know that Knowles had a new favorite fly.

Knowles, 83, has a pheasant tail nymph variant that he calls his Prism PT. It can be tied with either prism dubbing or ice dubbing.

“But I call it the Prism PT because that has a better ring to it than Ice PT,” Knowles said.

I wouldn’t have known about it except for a picture John Sturgis sent this week. He advised that it’s been the best fly at Beaver for “the last three years.” That may be stretching the time line a bit, but Knowles admitted this week that it’s been hot for “a good while.”

It’s been deadly on the Beaver tailwaters, but Knowles admitted it was developed for fishing in the West.

“I came up with that mainly for Montana fishing,” said Knowles, who spends the better part of a month bouncing around the great trout rivers in that state every summer. He is planning another trip for this August.

It was an alternative for the root beer midge for fishing the Missouri River below Holter Dam in Montana, but it’s worked about everywhere Knowles has fished it.

“I started off tying it with a copper bead, like I use for the root beer,” he said. “But I found that it fished better with a gold bead.”

As only a retired engineer would do, Knowles worked out the details with elaborate field tests with delicate changes each trip. He tried a gold bead fly above a copper bead fly, then reversed them when the fishing got hot or cold.

I field test flies for Knowles and it takes lots of time on the water. It also takes some will power to put away a fly when the fishing is hot to try something else. It’s much easier to change when there are no strikes and that is required, too.

Knowles ties his Prism PT with the standard pheasant tail fibers for a tail, three of them would be exact, but who counts? The body is wrapped with PT fibers and a reversed gold rib. The change to this old standard is the collar. Instead of peacock herl, use the prism dubbing. It’s an olive color.

“The ice dubbing works, but the prism dubs easier,” Knowles said. “And, I don’t tie in legs like the traditional PT.

It’s a “guide fly” in that manner. Guides skip steps to speed the tying process. A PT with legs might sell better in a shop because it looks anatomically correct, but if it doesn’t catch more fish, the guide is going to skip it.

Knowles ties this for only one shop, McLellan’s in Fayetteville. He once tied for many shops around the country. But he’s down to McLellan’s and Unicoi Outfitters in Helen, Ga.

“I just can’t tie in numbers like I once could,” said Knowles, who has battled back from multiple cancer surgeries, the last at MD Anderson.

“I used to sit down and tie about 60 dozen. Now 20 dozen is about all I can do. Unicoi just sent me an order for 56 dozen root beer flies. It’s been their top seller for several years.”

I’ve been fishing the root beer at my hot spots on the White the last three weeks. I’m excited to fish the Prism PT, although all I have now is ice dubbing. I’ll find some prism dubbing later. I know either will work and expect to catch trout. David has never touted me on a fly that didn’t work.

No, I’m not saying where I’m catching brown trout, other than to say I’m not on the spawning beds. It appears that’s happening late this season, so be careful where you step.

Those who know me best are going to see me catching fish and think it’s on the root beer midge. There was a time when it would have been the ruby midge. Perhaps that’s about to change again. I’ve already tested it on the Norfork and it was wonderful. There will be some field tests of the Prism PT on the White where I’ve been catching brown trout before the trip to Tampa, Fla., for the Outback Bowl.

I feel the same sort of way about making at least one prediction for the bowl game as I do fishing the Prism PT. A fly touted by David Knowles is about as reliable as saying a Sam Pittman team is going to play hard.