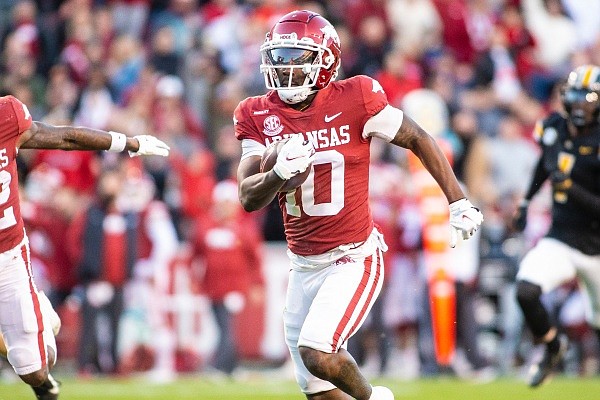 Arkansas wide receiver De’Vion Warren runs the ball after catch on Friday, Nov. 26 2021, during the second half of play at Reynolds Razorback Stadium, Fayetteville.

FAYETTEVILLE — In a post to his Twitter account last December announcing his return to Arkansas for the 2021 season, De’Vion Warren wrote that the best was yet to come for him.

The speedy receiver was spot on. Thanks in part to his selflessness and contributions in a handful of games, the Razorbacks finished the regular season with eight wins for the first time in a decade and earned victories in all three of their trophy games.

Warren saved his best performance of this season for his final home game at Arkansas. In the 34-17 victory over Missouri on Nov. 26, he totaled 95 yards from scrimmage — 63 receiving, 32 rushing.

“I did feel I was playing my best ball at the end of the year,” Warren said. “This comes with coming back from injury. It’s not the injury, it’s more of the confidence that you have in yourself and in your body.

“That was more of it, being able to be confident in myself.”

Warren is hoping to make one more splash at receiver and leave a lasting impression on Razorbacks fans in the Outback Bowl against Penn State on Jan. 1. And there will likely be opportunity to do so with Treylon Burks out of the picture for Arkansas.

In fact, Warren’s breakout performances a season ago against Mississippi State and Auburn came with Burks limited or absent. He caught 9 passes for 195 yards and 3 touchdowns in those games.

But beyond his statistics, closing his college career in style with a win and sending Arkansas football off into 2022 with additional positive momentum would mean a great deal.

“It’s been great. I’m happy that I've been here to help with the rebuild and being part of it. It's just been a good thing for me.”

Warren, a native of Monroe, La., has played for three head coaches (Bielema, Chad Morris, Sam Pittman) and an interim in Barry Lunney Jr., and currently carries with him the lessons learned amid program turmoil and a personal setback.

In the midst of a career-best season in 2020, he suffered a torn ACL in Arkansas’ road loss against Florida. Seven games in, Warren had 15 catches for 278 yards and 3 receiving scores. He'd totaled 8 receptions for 38 yards and 1 touchdown the previous three seasons combined.

Now a veteran in the Razorbacks’ receivers room, Warren said he has grown most over the years in terms of work ethic and leadership, byproducts of fairly regular run-ins with adversity.

“You can always get down and just want to quit, but being able to persevere, continue to go through and know that each time you go out there, it’s a chance to prove that you can do this and you’re willing to do this,” Warren said.

“It’s just being able to stay positive and motivated and keep working through it.”

Having never experienced a postseason game in his career, a lack of motivation for the Outback Bowl is out of the question for Warren.

“Some teams take (bowl games) lightly,” he added. “We don’t take any game lightly, so for us it’s another game that we have to go out there and earn respect. In college football, people do not respect Arkansas.

“For us, it’s motivation that we have a big chance to be on a big stage and continue to play the game we’ve played all year.”