Morgan gears up for last ride with Razorbacks 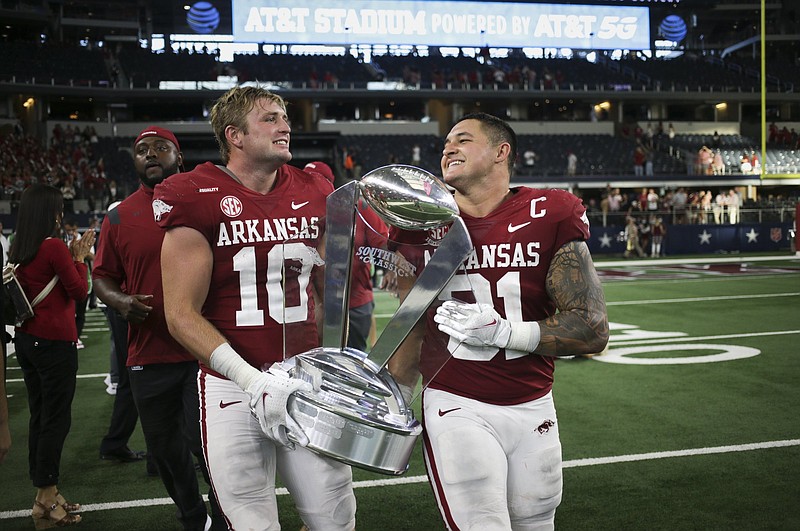 TAMPA, Fla. — As Grant Morgan was walking into one of his final press conferences as an Arkansas Razorback he was given a Christmas present.

It was his Brandon Burlsworth trophy.

He brought the trophy given to the outstanding walk-on in the country into the press conference and set it between him and quarterback KJ Jefferson.

“KJ won it,” he said with a laugh as football sports information director Kyle Parkinson moved the trophy to Morgan’s side of the table.

It was fitting that Morgan had the trophy with him.

He has gone from an unknown freshman to All American and team leader for the Arkansas Razorbacks and after six years, an extra season compliments of covid, he’s ready to move on.

“It’s time,” the Greenwood native said. “I’m going to miss being with my teammates and I’m even going to miss you guys [the media] but I’m excited to be a fan in the future.’

In some ways, it seems like Morgan should have tenure.

Six years and a couple of degrees, two dismal 2-10 seasons, and in the last two years, he has been a huge reason the Razorbacks became winners again.

Winning for him has been a burning goal, but it has never been about him.

It is about team.

As he and Jefferson shared a time with the media he constantly talked about this guy or that guy. He nodded at everything Jefferson said.

He smiled a lot.

He’s comfortable in his skin and when his career is looked at it should be one as a top-shelf player who played with pain, aches and even when he’d been better off on the sidelines.

For the first time in too long this Saturday he won’t be wearing a knee or elbow brace.

“That feels great,” he said with a laugh.

Morgan, Jefferson, Raheim Sanders and John Ridgeway were the players called on by Sam Pittman to address the media Tuesday.

Hand picked by the coach, all of them were focused on Penn State and the Outback Bowl.

Questions came from all areas, but the answers always ended up about Saturday’s game.

There is respect for Penn State, and there should be, and when it was mentioned that the Nittany Lions had two players declare for the draft and opt out of the bowl this week, they shook their heads and said, Penn State hasn’t opted out.

Ridgeway, a transfer senior, even said he never considered not playing even though he’s been invited and accepted a chance to play in the Senior Bowl.

He said he’s going to finish what he started.

Maybe coaches who cancel bowl games should ask themselves what message are they sending to all the kids who spilled blood, sweat and tears for their team and didn’t quit.

There is no quit in Pittman or these Razorbacks.

The players talked about the great hospitality here, the beautiful weather and all the activities, but in the end they talked about executing against Penn State.

A lot of that credit goes to Morgan who dedicated himself to the Razorbacks and their quest to crawl out of the cellar and become viable again.

Listed at 5-11 he’s undersized as a SEC linebacker and no one is ever going to ask him to run track, but he has a heart that can’t be measured.

Whatever the Razorbacks needed on defense he tried to do it and when they needed leadership two years ago it was the unheralded Morgan who filled all the gaps.

Morgan earned all his honors with might and fight.