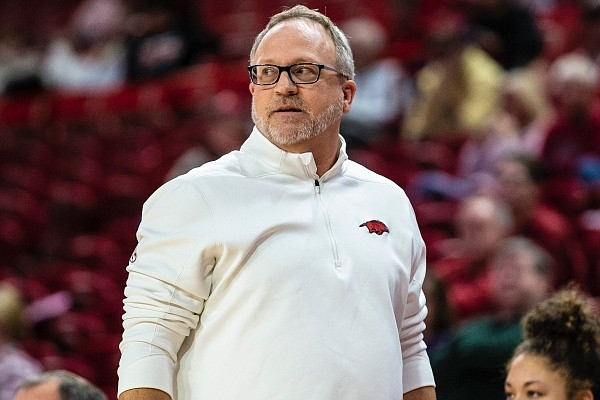 Mike Neighbors, Arkansas head women's basketball coach, on Sunday, December 12, 2021, during the 2nd half of play at Bud Walton Arena in Fayetteville.

FAYETTEVILLE — The University of Arkansas women’s basketball may not have an opponent today, but Mike Neighbors believes it’s important to keep the game-day routine going.

He believes that’s important even though the Razorbacks (10-3) had their scheduled SEC opener at Ole Miss postponed because of covid-19 issues within the Ole Miss program and they weren’t able to arrange another opponent.

But Neighbors said they will put together something game-like whether it be a Red-White type scrimmage or something involving their men’s practice team right down to the pregame meal and shoot-around.

“We’ll treat [today] like a game day whether we have tickets being sold to it or not,” Neighbors said on a Zoom call Wednesday morning. “It almost feels like it’s not going to interrupt, it’s just delaying. It’ll be really hard to watch those other games that are happening in the league [tonight] on the [SEC] Network.

“You don’t want to have a bye the first week of the SEC. You want that bye to come in the end of January and February.”

Arkansas is involved in one of three games slated for today that were postponed because of covid-19 issues. In addition to Arkansas-Ole Miss, Florida at Mississippi State and Kentucky at Auburn also were postponed.

That leaves four of the original seven games to kick off SEC play still on as of Wednesday evening. The Ole Miss game against South Carolina on Sunday has also been postponed.

That means the Razorbacks will host No. 7 Tennessee at noon on Sunday in Walton Arena to begin league play.

This year’s team is much younger than last year’s group that dealt with covid-19 and traveled on game day for every SEC game. Neighbors isn’t worried about how they might handle things with the covid-19 cases rising again.

“We still do have good leadership and the character of our young kids is impeccable,” Neighbors said. “One thing our group is equipped to handle is adversity.”

The Razorbacks have dealt with a depleted roster after junior Marquesha Davis chose to enter the transfer portal in early December followed by a rash of injuries.

Guard Amber Ramirez, the team’s lone senior, and 6-3 freshman Emrie Ellis have both returned to practice and would have been ready to play today, Neighbors said. Ramirez missed the last two games before the Christmas break, including an 81-72 loss to Creighton, with an undisclosed injury. Ellis missed the last five games after rolling her ankle in the first half against California on Dec. 5.

But 6-2 redshirt junior Erynn Barnum, the team’s leading rebounder, is still sidelined and hasn’t played since the Cal game.

Despite having six newcomers, including five true freshmen, Neighbors pointed out there were players who were a part of the team that knocked off 11-time national champion Connecticut in a game thrown together on the fly last season.

“We had six kids test positive the morning of the UConn game,” Neighbors said. “We coulda canceled that game. But what kind of message would that have been to send to those kids that could play? … They draw back on that and they go ‘Hey, if we can do that, we can do anything.’”