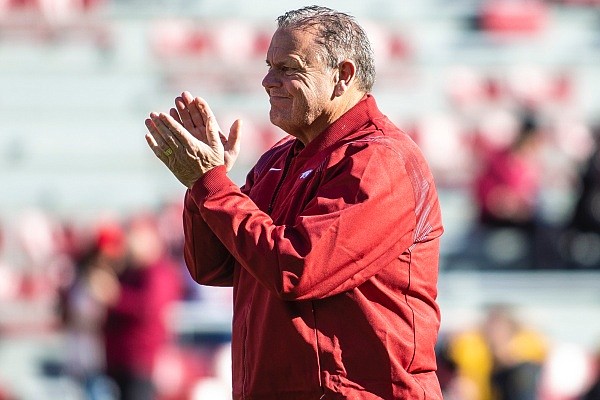 Arkansas Coach Sam Pittman is shown on Friday, Nov. 26 2021, during the first half of play at Reynolds Razorback Stadium in Fayetteville.

TAMPA, Fla. — Sam Pittman and James Franklin are fast building a solid friendship as like-minded head coaches at the University of Arkansas and Penn State.

The pair shared hugs and back slaps before and after their Outback Bowl press conference on Wednesday at the Tampa Hyatt House, three days before the No. 21 Razorbacks (8-4) and the Nittany Lions (7-5) meet for the first time.

During the press conference, they shared laughs, took turns adding on to the other’s responses to a few questions and commiserated together over the continuing impact of covid-19 and player opt-outs at bowls across the country that have led to cancellations and altered matchups.

“I want everybody to know I have such a great respect for Coach Franklin,” Pittman said to open the press conference. “He and I have had some really conversations over the last two times we were able to get together.”

Those two occurrences were the Outback Bowl signing party early this month and the team bowling outing on Monday.

“I’ve known Coach Pittman really from afar,” Franklin said, before adding he enjoyed a lengthy conversation with Sam and Jamie Pittman at the Splitsville Southern + Social on Monday.

“Just really enjoyed it. Coach Pittman’s doing it the right way. There’s a lot of excitement at the University of Arkansas right now with what he’s been able to do. I think he’s a great fit for the university.

“More than that, I think he’s a great guy, a regular guy who you can have really good conversations with.”

Among several light-hearted exchanges between the two, perhaps the funniest came when a reporter asked what it was like leading a program that they both grew up around. Pittman came to Arkansas camps and games from nearby Grove, Okla., as a prep player, while Franklin, a native of Langhorne, Pa., camped at Penn State in his high school days.

“For me, I can explain it when we’re coming in on the bus to home games, you see people walking across there,” Pittman said. “I was one of those people trying to get into the game, trying to get a glimpse of the coach on the bus.

“I feel that every single home game. Very surreal, very honoring. I’m honored to be the head coach at Arkansas. … I was a fan. I went to football camp there. Lou Holtz was the coach.

Interjected Franklin: “Did you get rejected too?”

Pittman replied, “I got recruited … none,” to create a round of laughter from the room.

“I didn’t mean to interrupt, coach,” Franklin said. “Yeah, I grew up right outside Philadelphia so it’s unusual.

“I did go to camp. I think Jim Caldwell was the quarterbacks coach at the time. They had a drill, Coach Pittman, where you threw fades into a little target sitting there in the end zone. I won that drill, and I thought for sure Coach Caldwell was going to come over and talk to me about why I should be at Penn State. He never came over.”

After the laughter died down, Franklin expressed how much pride he took in being the Penn State coach.

Pittman wound up earning NAIA All-America honors as a defensive lineman at Pittsburg (Kan.) State, while Franklin took his quarterback talents to East Stroudsburg (Pa.) University, where he broke or tied 23 school records.

Franklin said part of their conversation on Monday revolved around the changing nature of the game and how covid-19 and opt-outs have decimated some rosters and cancelesd other bowls.

The Nittany Lions have six opt-outs, five defensive starters and ace receiver Jahan Dotson, for the bowl game while Arkansas has two in star receiver Treylon Burks and the team’s best pass rusher in Tre Williams.

Franklin, who is coaching in his 10th bowl in his 11th season as a head coach, said he’s never had an opt-out in 12 years in the college coaching ranks before 2021.

Franklin said he and his staff knew about the opt-outs even if it wasn’t in the public.

“We’ve been planning and prepared for this for a while,” he said. “None of these announcements are new to us.”

The combination of the coronavirus, opt-outs and cancellations were a big topic for the coaches earlier this week.

“We’ve never seen people not playing [bowl games],” Franklin said. “It happened a little bit last year. We thought we were done with it. It’s happening again this year.

Added Pittman, “I think it says a lot about Penn State and Coach Franklin. He’s had several [opt outs] over there at Penn State. The teams are different. I mean that’s just what it is.