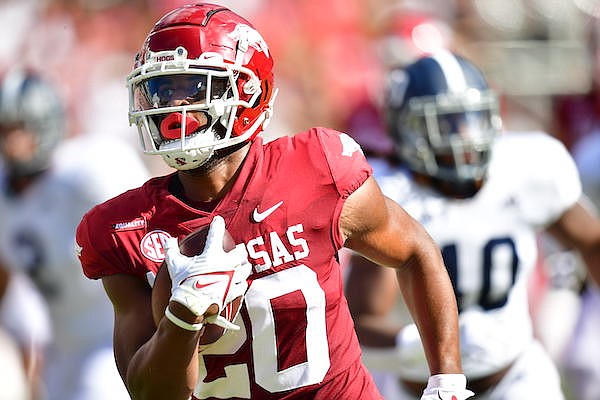 Arkansas running back Dominique Johnson carries the ball during a game against Georgia Southern on Saturday, Sept. 18, 2021, in Fayetteville.

TAMPA, Fla. — University of Arkansas tailback Dominique Johnson said running backs coach Jimmy Smith has kept pointing out through bowl practices that the Outback Bowl rushing record is 400 yards by Wisconsin in a 34-31 overtime victory against Auburn on Jan. 1, 2015.

The Razorbacks hope to challenge that against Penn State’s No. 41 rush defense, which has allowed 137.2 yards per game but will be without five starters on Saturday.

“I’m very confident coming into this game, knowing that I have the other backs behind me,” Johnson said. “I feel like we’re going to come in and dominate this game just because of all the talent we have in that room.

“Obviously we have me, Rocket [Raheim Sanders], Trelon [Smith], AJ [Green], we all run the ball a different way, all different styles. I don’t think as a defense you can prepare for all the different run styles we bring to the table, so I feel that’s a plus for us.”

Penn State lost another pair of defenders in a 24-hour period late Tuesday and early Wednesday as the Nittany Lions continued to prepare for Saturday’s Outback Bowl against No. 21 Arkansas.

All-Big Ten defensive end Arnold Ebiketie announced he was opting out of the bowl game late Tuesday, then defensive tackle Derrick Tangelo followed suit on Wednesday morning. That brings the team total to six, including five defenders who are bowing out to begin their preparations for the 2022 NFL Draft.

Penn State Coach James Franklin said the news is new to media and fans, but the Nittany Lions coaching staff had been clued in on the players deciding to leave and making announcements in their own time.

Ebiketie, a 6-3, 256-pound senior transfer from Temple who logged team highs of 9.5 sacks and 18 tackles for loss in his lone season at Penn State, takes another key piece off the defense the Razorbacks will face on Saturday. Ebiketie was named a second-team All-American by The Athletic.

Tangelo had 29 tackles, 5 tackles for loss and 2 sacks, along with a forced fumble and fumble recovery.

Inside linebackers Brandon Smith and Ellis Brooks announced their opt-outs early in the postseason, then ace safety Jaquan Brisker did the same on Monday. Additionally, top receiver Jahan Dotson announced Monday that he would not play in the bowl game.

The Arkansas Razorbacks got a key piece of their offensive attack back on Wednesday as senior receiver Tyson Morris practiced for the first time this week in preparation for Saturday’s Outback Bowl against Penn State.

Morris had not flown with the University of Arkansas team on Sunday, staying behind in Northwest Arkansas due to an undisclosed illness and the need to be cleared for participation. He flew to Tampa on Tuesday evening and was suited up in spider pads and running with the first offensive unit in Wednesday’s 90-minute workout at the University of Tampa.

Morris, the top pass catcher on the team in Treylon Burks’ absence, is expected to receive more targets against the Nittany Lions, along with several others like Warren Thompson, De’Vion Warren and Ketron Jackson Jr.

Arkansas tight end Blake Kern got a laugh on Wednesday when asked if he’d had conversations about “saving Reid Bauer’s butt” on the fake field goal touchdown pass at Alabama on Nov. 20.

Kern reached behind with his right hand and made a tough catch to pull in Bauer’s jump pass and turn it into a 32-yard touchdown to pull Arkansas within 34-28 early in the fourth quarter of a 42-35 loss.

“We have plays like that we go through, every week we carry different things in at practice, and we work on it after every practice,” Kern said. “And I’ve told him, ‘Man, put it to where I can catch it or nobody can catch it,’ you know what I mean? And on that play, [an Alabama defender] got picked by the ref and a lot of things went my way, and then he put the ball on me, and it all happened so fast. But yeah, we’ve talked about it. He thanks me, and I thank him.”

Arkansas quarterback KJ Jefferson touted the individual coaching he’s received from offensive coordinator and quarterbacks coach Kendal Briles after receiving a question about his impressive 21-3 touchdown-to-interception ratio, 66.9% completions and his 168.7 quarterback efficiency rating that is seventh in the FBS.

“Just knowing what my strengths are and what my weaknesses are and areas I need to get better at,” Jefferson said. “He does a great job with me. A lot of one-on-one time with me and him on the field and off the field, making sure I know what I’m talking about when I speak ball. Just knowing what my strengths are and putting me in the best position to win, and making sure I get the ball to my teammates and let them do what they do.”

The SEC holds a 17-11 edge in head-to-head matchups with the Big Ten in the Outback Bowl. The game mixed conference participants in its early years, but has maintained a Big Ten-SEC matchup every year since 1996.

Arkansas will be playing in its first Outback Bowl.