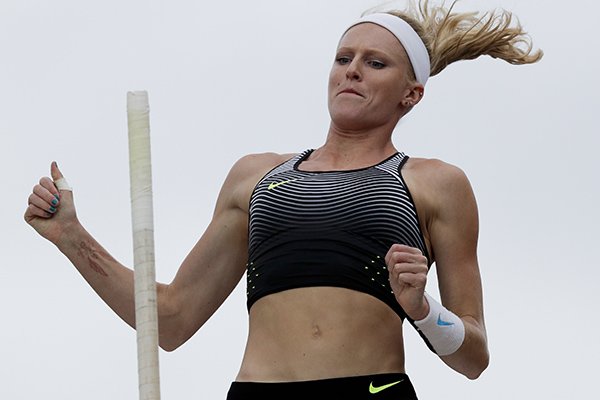 FAYETTEVILLE — Former University of Arkansas NCAA champion pole vaulter Sandi Morris didn’t show any signs of rust competing at a meet for the first time in more than four months and just two weeks after recovering from a bout with covid-19.

Morris opened the indoor season by clearing 15 feet, 9 1/2 inches — a world-leading mark — to win at the second American Track League professional meet held Sunday at the Randal Tyson Center. Anicka Nowell, who competes for Canada, was second at 14-11.

“I had a lot of fun today,” Morris said in an interview with ESPN2. “I executed exactly what my coach [Arkansas assistant Bryan Compton] and I had planned, jumping on some bigger poles. I had a lot of adrenaline at the end there.

“Implementing the things we’d been working on in practice, I was really happy with today.”

Morris said going with bigger poles should help her reach higher marks indoors and into the outdoor season.

“I want to get a few meets on them during the indoor season because the outdoor season, hopefully we have the Olympic Games this year,” she said. “So with new poles, I want to get as many reps on them as possible.”

Morris, who lives in Fayetteville, said being able to train and compete at home — the American Track League has two more meets scheduled at the Randal Tyson Center on Feb. 7 and 14 — is a plus.

“My coach stays in Arkansas and doesn’t get to travel the world with me when we have a normal season in Europe,” Morris said. “So it’s really great to be right here in my backyard jumping with my coach and getting some reps in.”

Sunday marked the first time Morris had vaulted in a competition since early September at a meet in Greenville, S.C., where she and her father, Harry Morris, built an outdoor pole vault pit in her parents’ neighborhood.

“My dad is the only reason I was able to train [when most facilities were closed to athletes in the spring and summer], and I even held some competitions on it last year,” Morris said. “And it was all thanks to him and his hard work building that pit for me.

“I helped as much as I could, but he’s the carpenter for sure, and the perfectionist and mastermind behind the pole vault pit.”

Ryan Crouser, the 2016 Olympic gold medalist in the shot put who had a world-record toss of 74-10 1/2 last week at the first American Track League meet held in Fayetteville, won Sunday’s competition with a best of a 74-4 1/4 on his second attempt — a mark which equaled the previous world record set by Randy Barnes in 1989. Four of Crouser’s throws Sunday were better than 73 feet.

“Consistency-wise, this week was better,” Crouser, a volunteer coach for the Arkansas men’s team, told ESPN2. “I didn’t feel quite as good, I would say, as I had hoped. Just the first meet of the year kind of took a little bit out of me.

“So I’m excited to see where I can go from here. I had the energy last week, had the execution today. We’re off next weekend and will be back in two weeks, and hopefully we can put those things together.”

ESPN2 color analyst Ato Boldon, who as a sprinter won an Olympic silver medal and three bronze medals, joked on the telecast that Crouser is throwing so well that he probably wishes the Olympics — rescheduled for July 23-Aug. 8 in Tokyo — were being held next week.

“I could be ready for them next week, but we can have them this summer,” Crouser said. “I’ll be happy with that. I feel like I still have more to work on.”

Nicholas Hilson, who is from Jonesboro and ran at Arkansas State University and Arkansas, won the 600 on Sunday in 1:19.14 to edge James Gilreath, a former Baylor All-American who was second in 1:19.15. Former Razorback Travean Caldwell was third in 1:19.35.

“You’ve got to defend your home turf,” Hilson said in an interview with ESPN2. “We’re the Hogs and we’ve got to make sure we stay on top.”

Hilson’s specialty is the 400-meter hurdles.

Former Arkansas All-American Sparkle McKinght took third in the 600 in 1:29.33.

Megan Clark, a former Duke All-American who trains in Fayetteville with Compton, was third in the pole vault, clearing 14-7 1/4. Lauren Martinez, who has one outdoor season of eligibility remaining at Arkansas, cleared 14-3 1/4 to take sixth.