SEC eager to change perception league is down in stretch run 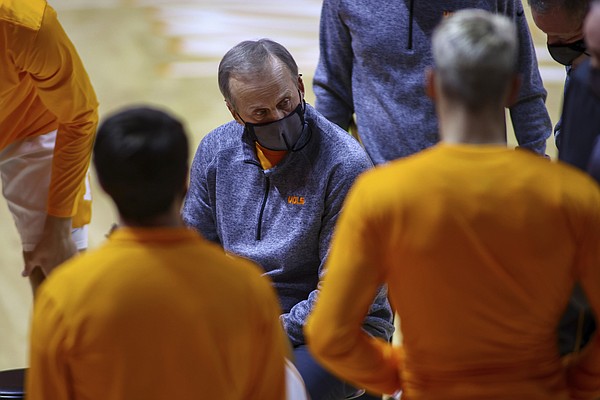 KNOXVILLE, Tenn. — Rick Barnes has a message for anyone wanting to count out the Southeastern Conference this season.

His 18th-ranked Tennessee Volunteers routed No. 15 Kansas 80-61 Saturday night, clinching a 5-4 win in the Big 12/SEC Challenge. It's just the second time the SEC has won this non-conference showdown created as a chance at improving resumes in late January and a bit of an NCAA Tournament preview.

The last time the SEC won this event was in 2018 when it sent a league-record eight teams to the NCAA Tournament. The SEC has had 15 NCAA Tournament teams since that season, second-most in the country in that span.

"I am glad we won the challenge, I really am," Barnes said. "If there is enough talk about our league not being very good and people talking arguably the Big 12 or the Big 10 being the best league, the fact is we were able to win 5-4 ... yes, I think it's great for our league."

Kentucky isn't leading the SEC as usual with the Wildcats (5-10) struggling through the longest skid of coach John Calipari's tenure. Florida wound up postponing four games. Florida's Keyontae Johnson, the SEC preseason player of the year, collapsed on the court during a Dec. 12 game and hasn't played since.

Tennessee, the preseason pick to win the SEC, lost three games to drop to fourth in the league.

Not a good sign for a league that had been showing signs of improving depth beyond Kentucky and Florida with its national titles. The SEC had the top pick in the 2020 NBA draft — Georgia's Anthony Edwards — with three other lottery picks from Auburn, Alabama, Vanderbilt and not Kentucky.

Barnes said there's been so much uncertainty with teams sidelined at varying times this season. A combination of positive COVID-19 tests, contract tracing and quarantining kept Kentucky from playing No. 5 Texas, which might've led to a second straight tie and third in five seasons in the Big 12/SEC Challenge.

With the calendar about to flip to February and the stretch run in conference play, the SEC is showing signs of strengthening.

Florida could join Alabama, Missouri and Tennessee in The Associated Press rankings Monday after turning in the biggest upset of the Big 12/SEC Challenge. The Gators knocked off No. 11 West Virginia 85-80 and are now 7-3 since losing Johnson.

Coach Mike White said the Gators had to revamp everything offensively and deal with their emotions, which took time.

"We came back down to Earth a little bit," White said. "We've gotten to work, and we've gotten better. We've got a ways to go, but we're obviously better than we were a couple weeks ago."

Alabama was picked to finish fifth in the SEC. But second-year coach Nate Oats has the Crimson Tide chasing their eighth SEC regular season championship and first since 2002 at a program that's best NCAA Tournament success came in reaching the Elite Eight in 2004.

The Crimson Tide even swept Kentucky for the first time since 1988-89, the last time the Wildcats had a losing record. The Tide won 10 straight until a 66-61 loss on the road to No. 24 Oklahoma Saturday, which Oats expects will get his players' attention in a way he couldn't while they kept winning.

"If we can learn from it, it'll end up helping us in the long run," Oats said. "We can go one of two ways. We can come back and play a lot better the next game, or we could tailspin. We'll see what our leadership does."

Not only was Tennessee expected to win the SEC, the Volunteers were projected to reach their first Final Four with Barnes having an experienced roster featuring a trio of five-star recruits. But freshman Jaden Springer missed three games, and Tennessee lost each of those to Alabama, Florida and Missouri.

Now Springer is back, and the Volunteers turned in possibly their best all-around performance routing Kansas with Springer and fellow freshman Keon Johnson starting together for the first time this season.

"To be the team we want to be at the end of the year holding the national trophy we need to become that team," James said.