Even without great runner, Razorbacks roll on 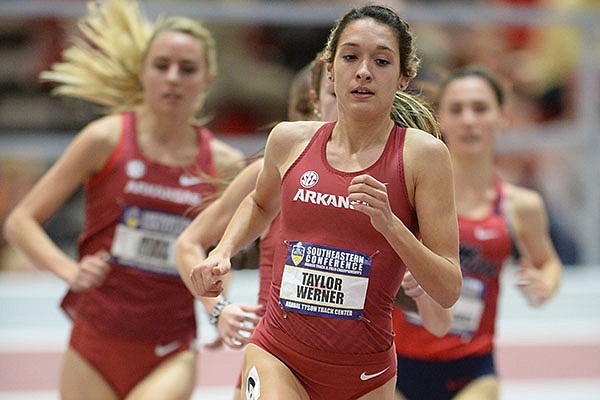 For the 2020 indoor and outdoor season he would redshirt senior Taylor Werner, the former SEC Runner of the Year, two-time SEC Scholar Athlete of the Year, and distance linchpin to Arkansas’ 2019 NCAA and SEC triple crowns.

“When you have a master plan that we have Taylor coming back, (Katie) Izzo, Lauren Gregory coming back, we’ve got some other people coming back, we should, be really, really salty indoors and outdoors,” Harter said.

A great plan until covid-19 and the offer from Puma athletic apparel interceded.

Thanks to covid, shoe companies began making earlier professional offers to collegians nervous if they will compete. The NCAA cancelled the 2020 NCAA Indoor Championships the day before they were to begin last March in Albuquerque, N.M., then cancelled the entire 2020 Outdoor season.

Little wonder Werner, now training at Puma’s base in North Carolina, accepted an offer “too lucrative to turn down.”

Losing Werner the eve of their apex would turn off most programs’ national hopes.

Harter’s crew runs on. Not only Izzo and Gregory, compiling times among world leaders, but young Harter coached distance runners keep emerging while sprints coach Chris Johnson’s quarter-milers lead the world in the 1,600-meter relay with national scoring potential from the 60 through 800-meters.

The training set so differently for all these disparate Harter-Johnson-Compton coached pieces seemed to take a simultaneous team rise just knowing Werner’s points have fallen.

So even minus Taylor Werner, Harter believes this indoor team could rank among his best.

“It definitely has that potential," Harter said. “Everyone felt the loss of Taylor but every one of them took a step up in we all need collectively to help fill that void. If we can just keep our wits about us for SEC Indoor and NCAA Indoor, I think we’ll have a lot of positive results.”