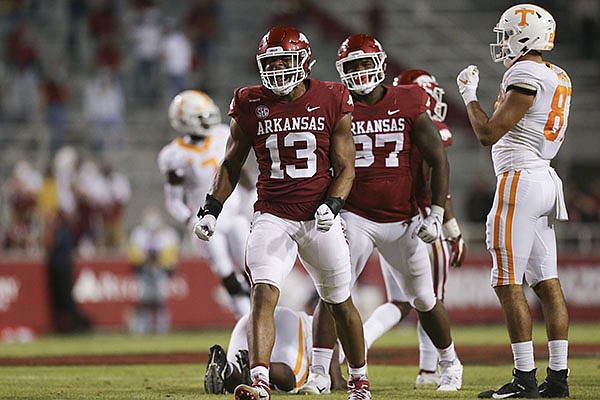 The University of Arkansas will apparently get only one season out of junior college defensive end Julius Coates, who has entered his name in the NCAA transfer portal on Friday.

“I have officially entered the Transfer Portal!” Coates posted on his Twitter account. “Thank you to The University of Arkansas for blessing me with the opportunity to represent their program!”

Coates, a transfer last season from East Mississippi Community College, had an up-and-down junior season with the Razorbacks. The 6-6, 289-pounder notched 18 tackles, including 3 tackles for loss and 2 sacks to tie for second on the team behind Eric Gregory.

He also had two quarterback hurries and a forced fumble.

Coates played in seven of 10 games in 2020. He did not travel for the Razorbacks’ 21-14 road win at No. 16 Mississippi State, and he was also out for the season finale against Alabama for an off-the-field issue, according to people familiar with the situation.

Coach Sam Pittman said he would not have been available for the Texas Bowl game against TCU, which was canceled on Dec. 29.