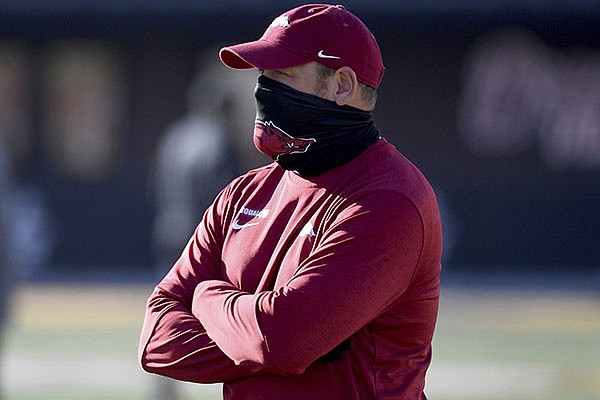 FAYETTEVILLE — University of Arkansas Athletic Director Hunter Yurachek was so pleased when the football program retained defensive coordinator Barry Odom last month that he tweeted a meme to show his feelings.

On a day when the UA officially announced a trio of new hires and introduced the foursome of assistant coaches Jermial Ashley, Cody Kennedy, Kenny Guiton and Michael Scherer, Odom’s new salary was obtained by the Arkansas Democrat-Gazette through a public records request.

Odom, who drew strong interest from college football powers LSU and Texas this winter, signed a new contract that bumped his salary to $1.75 million per year through the 2023 season, making him the highest-paid assistant in school history.

The former four-year head coach at Missouri, Odom originally signed a three-year deal worth $1.2 million per year to join Pittman’s first-year staff in 2020, but that was increased to $1.3 million when an SEC school believed to be LSU checked on his availability last winter.

“I think in coaching it’s big whenever you keep whoever you want to keep,” Pittman said on a video conference Thursday. “Barry was one of those guys. He’s a very important part of our football staff.

“Those calls are hard to make as a head coach when you have another job offered to you that might financially be a lot more. Those are hard calls.”

Pittman and Odom have heightened their friendship in the past year with near daily mid-day walks. Odom talked to Pittman about the interest from other schools this winter before electing to stay.

“Thank goodness for Hunter Yurachek,” Pittman said, referencing the OK on Odom’s pay raise. “The good thing about Barry is you can trust him. Once he says he’s going to stay, it’s done.

“He’s going to get offers every year. You want other teams to want your coaches. We’ll sit here next year and do it again. I’m sure as heck glad we have him.”

Odom’s second-year defensive staff with the Razorbacks will consist of the new defensive line coach Ashley, new linebackers coach Scherer and second-year cornerbacks coach Sam Carter. Ashley replaces Derrick LeBlanc, who has been pursuing other positions for a few weeks, and Scherer comes in for Rion Rhoades, who is being reassigned within the athletic department, at least temporarily.

Ashley and Kennedy will be paid $300,000 per year, according to their contracts. Kennedy is on a two-year contract and Ashley’s agreement is for one year.

Scherer, who was a defensive analyst for the Razorbacks last season, is set to make $175,000 annually on a one-year agreement.

Pittman said the staff changes revolved around one core element: Recruiting. In his 23-minute question and answer video session on Thursday, Pittman said a form of the word “recruit” 33 times.

“I was trying to bring in recruiters,” Pittman said. “Most of the time if you’re a good recruiter, you’re a good coach. Because recruiting is work, and coaching is work. To get Arkansas where we all believe that it should be and where it’s going to be, we have to continue to improve our recruiting. So that was a big part of all these hires, along with their coaching ability.”

The average age of the four new assistant coaches is 31.

“I didn’t consciously go out to hire age, to be honest with you,” Pittman said. “I went out to hire good men who can represent our state and our program the right way.”

Pittman said everyone on the current staff had a chance to give input into the new hires, including Odom and offensive coordinator Kendal Briles.

Pittman said Briles “stood up on a table” to vouch for Guiton, with whom he worked on the University of Houston staff in 2018.

As for the departing assistant coaches, Pittman wished them all well.

“The other fellas that aren’t here anymore, they’re really good people, really good men and we sure hope that they’re able to land wherever they want and get whatever job they want because they’re all fine men,” Pittman said.

Arkansas’ 10 full-time assistant coaches are set to make a program-record $5.375 million in 2021 — a 2.9% increase over their initial total pay last season.

All of the program’s assistant coaches are working through June on 10% reduced pay due to a financial crunch caused by the covid-19 pandemic.

Odom’s new salary eclipsed the $1.5 million the Razorbacks paid former defensive coordinator John Chavis in 2019 as the highest for an Arkansas assistant. Chavis was under contract to make $1.6 million the following year, but was paid a portion of that in severance after he was fired amid a head coaching change.

According to a USA Today database for assistant coach salaries, Odom’s new salary would have been the 11th highest in college football in 2020. It could rank higher in 2021 as five of the 10 highest-paid assistant coaches last season are now either head coaches or working in different jobs.

Odom’s new contract was signed on Jan. 25 and finalized with the signature of University of Arkansas System President Donald Bobbitt on Wednesday.

The contracts for Odom and the three new assistant coaches state they would be owed the full remaining amount of their contract value if they are fired by Arkansas for convenience. Any buyout would be subject to mitigation.

Odom, previously the head coach at Missouri from 2016-19, led the Razorbacks’ defense to modest statistical improvement in 2020 against what was judged the nation’s toughest schedule by many, including Warren Nolan’s strength of schedule ELO ratings.

Odom also served as Arkansas’ interim head coach for a 10-day stretch that included a 63-35 loss at Florida on Nov. 14 while Pittman was in covid-19 quarantine.

“Barry has that experience sitting in the head coaching chair in the Southeastern Conference and it’s been invaluable to Coach Pittman this year and it will be invaluable going forward,” Yurachek said Jan. 21. “Our student-athletes on the defensive side of the ball love him.

Arkansas allowed 34.9 points in 2020, down from 36.8 points allowed during a 12-game schedule that included four nonconference opponents the year before.