State of the Hogs: Ashley's mentor was a good one 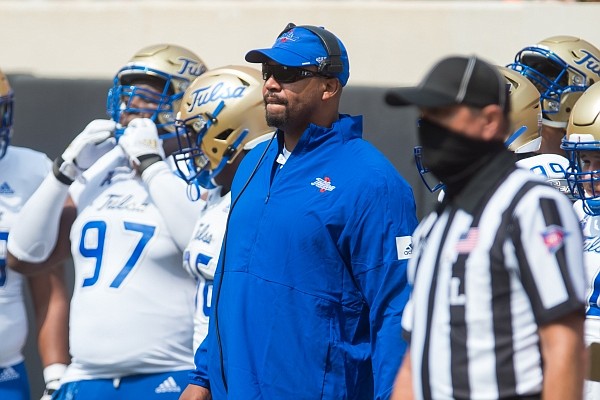 Arkansas hired Tulsa defensive line coach Jermial Ashley for the same position with the Razorbacks. He spent the past six seasons with the Golden Hurricanes.

In 50 years of interviewing coaches, some stand out as favorites. Among the first of those for me was Bill Young early in my days at the Tulsa World.

Young was defensive line coach and later defensive coordinator at Tulsa for John Cooper from 1980-84. That he could coach wasn’t the only thing that stood out.

It was that Young impressed as a genuine, stand-up person. There was obvious ability to judge character, then improve it. He was good at relationships.

The same kind of stuff said about Arkansas coach Sam Pittman was said about Young. Straight shooter, solid and unwavering in friendship are among the common traits of Young and Pittman.

So when it became clear that new Arkansas defensive line coach Jermial Ashley was a Young product as a player and coach, his stock went up with me.

A check with a veteran source with the Tulsa football operation provided confirmation. The conversation began with “the players will love him” and ended with “his mentor is Coach Young.”

When the Ashley-Young relationship was mentioned, Pittman didn’t go into detail about a possible phone call to Young during the hiring process. Pittman just said, “I coached with Bill at Oklahoma in 1997 and what a fine man he is. Bill basically took Jermial, helped him and so that was all I needed to know.”

Simply, that’s all I needed to know, too.

I watched several Tulsa games this year, more out of curiosity about linebacker Zaven Collins, the national defensive player of the year. What you saw was a pass rush from a three-man front, with Collins sprinkled in as a deluxe blitzer.

Apparently, that’s the same thing Pittman saw when he watched tape in his search for a defensive line coach to replace the terminated Derrick LeBlanc.

“Obviously you saw what Tulsa did as a team, and a lot of that correlates to the defensive line, the way they played,” Pittman said. “Basically, I did not know Jermial, but I watched tape after tape after tape, trying to find our new D-line coach.

“I love the way his kids played. I heard some outstanding things about him when I called and asked different folks. So, I'm very, very pleased to have him. Obviously, he'll have Oklahoma connections and Dallas connections for us in recruiting.”

Pittman also received great feedback on Ashley from Cody Kennedy, the new UA tight ends coach. Kennedy came from Tulane where he was offensive line coach and matched wits with Ashley the last two seasons in battles with the Golden Hurricane.

“I picked up the phone to talk to Cody about (Ashley),” Pittman said. “I watched the game and he said they’re well coached. The thing about the (Tulsa) defense is they fly around. They play hard. Obviously, Jermial has had some draft picks that he’s coached as well. I thought he could really help us in recruiting.”

The key is the pass rush, an area the Hogs struggled with recently. It was after the Missouri loss that Pittman mentioned the lack of pressure on quarterbacks as a frustration.

Dialing up pressure with scheme is one way, but Pittman said, “You can also win one-on-one battles.”

That’s what Tulsa did some over the last six years with Ashley coaching its defensive line.

“It’s not necessarily schematics, it’s about who do you have over there and how hard do they play and what kind of technique can you teach them to get to the quarterback.

“I think he’ll bring players in here and I know that he’ll have their attention because he’s a really good football coach and he’s a very dominant figure. He’s a big guy, very imposing type guy."

The scouting report on Ashley is that he measures 6-6, 260 pounds.

Those numbers date to when Ashley played for Young at Kansas. Young found him in junior college and turned him into a two-time All-Big 12 player with the Jayhawks during a time that KU didn’t have many.

Ashley had trouble finding the right words to match his strong feelings for Young. It might not be father-son, but it’s close.

“So with Coach Young, I mean, is the reason I'm in this business and here to this day,” Ashley said. “He actually recruited me at Kansas.

“He was kind of my figure for me, kind of guided me and let me know how you do things. (He taught) how you're supposed to operate in the business and dealing with players, preparations for games and all those things. I learned most of the things as a player and coach from Bill Young.”

Among those lessons learned are how to rush the passer.

“I think the number one thing that it takes to be a great pass rusher is understanding, and that is more along the lines of understanding the goals you are trying to accomplish,” Ashley said. “Understanding how to attack the person you are going against, understanding that person’s weaknesses and how to take advantage of them.

“That is the biggest thing when it comes to a pass rusher, just knowing how to attack the person you are lined up against.”

It helps to recruit players that look like Ashley. The Hogs must get bigger in the defensive line room.

It’s probably the reason Pittman hit the reset button on his staff this offseason.

“To get Arkansas where we all believe that it should be and where it's going to be, we have to continue to improve our recruiting,” Pittman said. “So that was a big part of all these hires, along with their coaching ability.

“If you want to change your room, you've got to go get the players to do that. We can't just go, '(Strength coach) Jamil Walker, you get these guys bigger and nastier and stronger and all those things.' We've got to help him, as well, and I think these guys will."