West Coast teams find home away from home in Arkansas 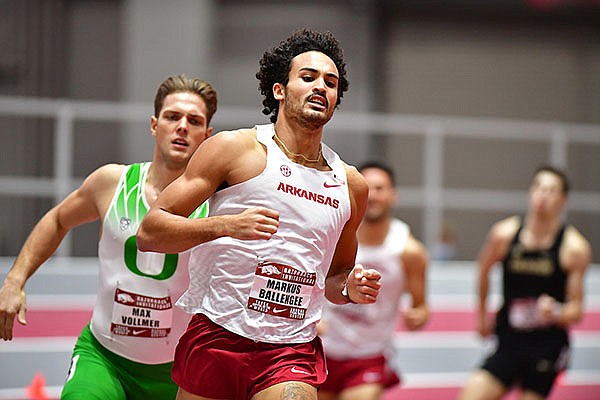 FAYETTEVILLE — The University of Arkansas’ Randal Tyson Center has become a destination for Pac-12 Conference track and field teams this indoor season.

Five Pac-12 teams will compete at the Arkansas Qualifier today, raising the total visitors from the conference to the Razorbacks’ home facility to eight in four meets.

WHEN Field events begin at noon, running events at 2 p.m.

NOTE Fans are not allowed because of coronavirus safety protocols

Other Pac-12 schools that competed at Arkansas the previous two weeks were Southern California, Oregon and Colorado.

“The West Coast schools are having problems trying to find places to go,” Arkansas women’s Coach Lance Harter said of the challenges of training and competing during the coronavirus pandemic. “And they jumped on the bandwagon very early to follow our protocols for covid and wanted desperately to come out here and get in our facility.”

A ninth Pac-12 team, Stanford, originally was scheduled to compete at Arkansas, but the Cardinal canceled those plans amid stringent protocols in Santa Clara (Calif.) County that caused the San Francisco 49ers to move their practices and final two home games to Glendale, Ariz., where the Arizona Cardinals play.

“Stanford has been in such a tight lockdown,” Harter said. “When [Santa Clara County] chases off the San Francisco 49ers, they’re not going to be flexible for anybody. So it’s been very much a struggle for Stanford to try to make things work.”

Most Pac-12 teams would likely be competing at Washington’s indoor facility in Seattle, Harter said, but that it is limited to a maximum of 90 people.

Harter and Razorbacks men’s Coach Chris Bucknam said having the influx of Pac-12 teams for Arkansas’ meets has been a positive.

“I think the variety is really good for our guys,” Bucknam said. “Competition-wise, it’s just great to see new faces, new programs. I think it’s good for the sport and good for us that we’re able to bring those teams in here.”

Harter said the Pac-12 competition will help Arkansas prepare for the NCAA Championships.

“To be perfectly blunt, I think the SEC by far is the No. 1 track and field conference in the U.S., and then I think second would be the Pac-12,” Harter said. “So any time you bring those teams in, it just elevates everybody’s standard to compete at a higher level.”

Renovations to the Randal Tyson Center, including a new track, also are an attraction for teams.

“It was deemed a few years back by the people that build tracks as the fastest track in the world,” Harter said. “It’s even faster now.”

Oregon’s men’s distance medley relay team ran a collegiate record 9:19.42 last week at the Razorback Invitational to better the previous mark by more than five seconds — 9:24.52 which was also run by the Ducks last year at the Randal Tyson Center.

“We’ve had great competition, but certainly when you look at the track, the reviews that we’re getting from the athletes are very good, and the results are showing it,” Bucknam said. “The track is lightning fast.”