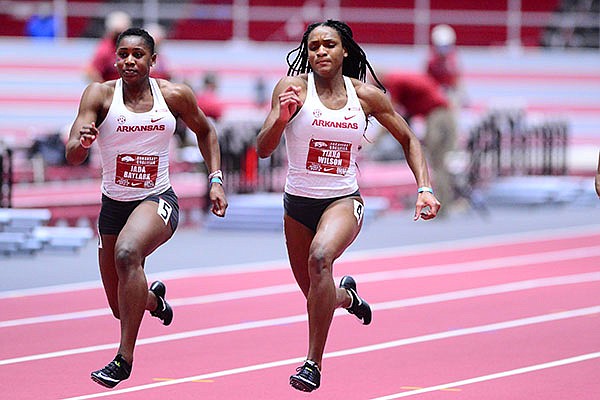 FAYETTEVILLE — Tiana Wilson, a University of Arkansas junior sprinter from Hamburg, won three races to lead the No. 1-ranked Razorbacks to a dominating performance Friday in the Arkansas Qualifier at the Randal Tyson Track Center.

“Tiana’s kind of like our secret weapon from Arkansas,” Razorbacks women’s Coach Lance Harter said. “She is just really starting to come into her own. She’s running with more authority and more confidence.

“It’s amazing what Chris Johnson [Arkansas’ sprints coach] can do with these kids. She’s from a little tiny town, and had very little background, and she’s just coming on like gangbusters.”

“Even with different kinds of lineups and every weekend being a little bit different in the regular season, it’s still important for us when we’re keeping score to win,” Razorbacks men’s Coach Chris Bucknam said. “So we’re happy that we beat a lot of schools. It kind of shows the versatility of our team. It was a good day for us.”

“That just reconfirms Paris is really, really strong,” Harter said. “That gives her a lot of confidence.”

Arkansas sophomore Daszay Freeman won the 60 hurdles in 8.20. Junior Yoveinny Mota was third in 8.24, which Harter said set a national record for her native Venezuela.

Baylark, a junior from Little Rock Parkview, took second in the 60 in 7.40.

Arkansas took the top two spots in the pole vault with Bailee McCorkle, a junior from Greenwood, winning with a clearance of 14-2 1/2 and sophomore Nastassja Campbell second at 14-2 1/2. Both cleared the same height, but McCorkle won based on having fewer misses. Junior G’Auna Edwards went 20-5 3/4 to take second in the long jump.

Phillip Lemonious — a sophomore transfer from Barton County (Kan.) Community College, where he won the national junior college title last year — made his Arkansas debut and won the 60 hurdles in 7.15.

“I’m proud of the kid, because he was on deck for three weeks,” Bucknam said. “He just had a lot of paperwork issues and finally the NCAA cleared him.”

Arkansas senior Etamar Bhastekar cleared 17-7 to take second in the pole vault, and freshman Adam Clark was second in the high jump at 6-6 3/4.