Allen: Be careful what you wish for 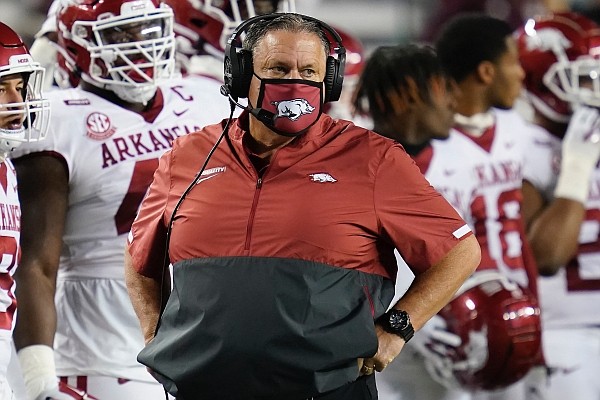 Come Sept. 6, 2025 the Arkansas Razorbacks can empathize with Goliath.

It’s what most without vested interest routinely do, pull for the underdog.

Yet woe be to the athletic Goliath upended by an allegedly anemic David.

Even after the 2019 Virginia Cavaliers won basketball’s national championship, some more cavalierly recall the Cavaliers becoming basketball’s first No. 1 seed losing to a 16-seed stunned in the 2018 NCAA Tourney by the University of Maryland-Baltimore County.

What attracted Barnhill from Tennessee and Broyles from Georgia to Arkansas was the statewide devotion to the Razorbacks unencumbered by any created play ‘em head to head games with Arkansas State.

Times change. Arkansas Athletic Hunter Yurachek, knowing Razorbacks Football Coach Sam Pittman deems it recruiting vital to play all SEC games on campus at Reynolds Razorback Stadium in Fayetteville, but as athletic director believing it’s keep the statewide fan base intact vital maintaining a meaningful presence in Little Rock, this week unveiled an altered schedule effective in 2021. It moved the every other year SEC home game with Missouri from Little Rock to Fayetteville while playing a Little Rock nonconference game four of the next five years capped by the 2025 debut with Arkansas State. It will keep the entire state interested.

But will it be in the Razorbacks’ best interest?

Yurachek reasons that the Razorbacks 2019 baseball team lost a midweek game, 17-7 to the University of Arkansas-Little Rock. Yet the sun came up with Coach Dave Van Horn’s Hogs reaching the College World Series.

However, a midweek baseball game, with both schools saving pitching for their conference weekend, doesn’t remotely equate to a football Saturday’s impact.

Yurachek reasons, correctly, that with Arkansas State’s Sun Belt Conference 4-1 for the 2020 season’s bowl games, losing to a Sun Belt team should not be deemed disgraceful.

Alas, “should” and “does” don’t always equate.

Just ask Chad Morris. Bad as the 2018 and 2019 Arkansas coach’s 2-year SEC 0-fer was, it was getting embarrassed at home by the Non-Power Five likes of North Texas, San Jose State and Western Kentucky that canned him.

And as the Jack Crowe flies, losing the 1992 opener at home to The Citadel of then lower Division 1-AA had Athletic Director Broyles singing “Hit the Road, Jack,” the next day.