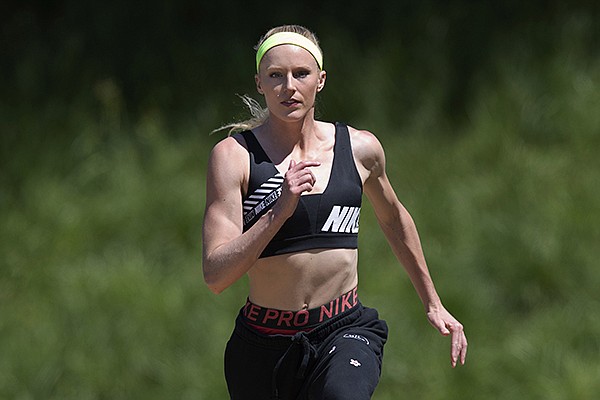 FAYETTEVILLE — Sandi Morris broke her own Randal Tyson Center record and improved her world-leading mark by clearing 16 feet to win the pole vault Sunday at the third American Track League meet held at the University of Arkansas this indoor season.

Morris, a former Arkansas NCAA champion and the 2016 Olympic silver medalist, bettered the 15-9 1/4 she cleared last week in her season opener.

Omar McLeod, a three-time NCAA champion for the Razorbacks, won the 60-meter hurdles in 7.53 seconds. It was the first hurdles competition for McLeod — the 2016 Olympic champion in the 110-meter hurdles — of the indoor season. He won his preliminary race in 7.55.

Arkansas senior LaQuan Nairn, who has outdoor eligibility remaining, went 26-9 1/2 to take second in the long jump and set a Bahamian national record. His previous indoor career-best was 26-3 1/2 at last year’s SEC Championships.

Marquis Dendy, a former Florida All-American and two-time U.S. champion, went 26-11 1/4 on his sixth and final attempt to win the long jump and edge Nairn.

Megan Clark, a former Duke All-American who trains at Arkansas, was third in the pole vault with a season-best clearance of 15-0 1/4.

The final American League Track meet to be held in Fayetteville this season is scheduled for Feb. 21.