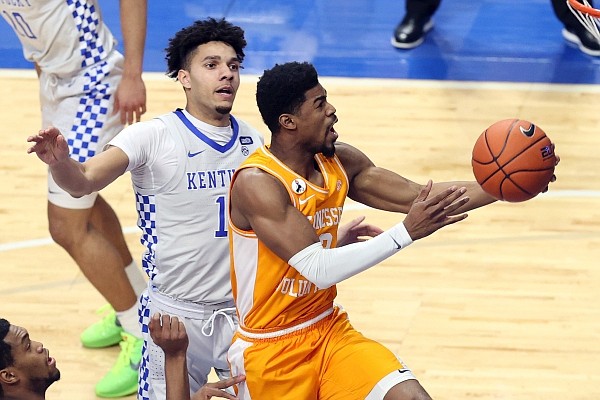 AUBURN, Ala. — Devontae Shuler hit a step-back jumper from inside the center of the arc with 0.2 seconds left in overtime, and Mississippi overcame a 14-point second-half deficit to beat Auburn 86-84 on Saturday.

Romello White, a graduate transfer from Arizona State, scored a career-high 30 points with 10 rebounds and blocked four shots for Ole Miss. Shuler, who missed a potential game winner with two seconds left in regulation, finished with 26 points and made four 3-pointers. Shuler and White scored four points apiece in OT.

Shuler scored five points including a 3-pointer and White added a layup as the Rebels closed on a 7-2 run to force overtime tied at 72. It was the only tie of the second half and the Rebels' first lead since 16-15 with 13:30 left in the first half.

Ole Miss trailed trailed by 14 points early in the second half and 61-51 with about 10 minutes left. The Rebels were 33-of-66 shooting from the floor.

Auburn will look to end a three-game losing streak when it plays at Vanderbilt on Tuesday. Ole Miss, which has won two straight including a 52-50 victory over No. 11 Tennessee, hosts Missouri on Wednesday.

Vols rally to beat Kentucky on the road

LEXINGTON, Ky. — Keon Johnson scored 17 of his career-high 27 points after halftime, Jaden Springer added a career-high 23 points and No. 11 Tennessee rallied past Kentucky 82-71 on Saturday night.

Trailing 58-48 with 12 minutes remaining, the Volunteers (13-4, 6-4 Southeastern Conference) scored 12 straight points for the lead thanks to the freshmen. The lead traded hands twice more before they helped Tennessee take control with another 12-0 run for a 74-64 advantage and went on to its second consecutive victory at Rupp Arena and sixth in nine games against Kentucky (5-12, 4-6).

The two combined for 18 points during the decisive surge.

"We felt like when we down 10 we gave them that lead," said Johnson, who finished 9 of 16 from the field and 9 of 11 from the line. "We just had to take care of the ball and play under control."

"Gotta give credit to coach (Rick Barnes), because he told us to be aggressive and make stuff happen," said Springer, who played a career-high 35 minutes. "We weren't really thinking about it too much, just thinking about going out and winning the game. I was definitely feeding off Keon, following his lead out there."

Josiah-Jordan James added 10 points and 10 rebounds and Victor Bailey Jr. had nine points for Tennessee, which avoided a fourth loss in six games.

Their efforts offset career highs of 23 points and 11 rebounds by Kentucky's Keion Brooks Jr., who scored 10 of his team's 14 points early in the second half for its last lead. Devin Askew and Olivier each added 14 points, but the Wildcats lost for the sixth time in seven games. They've lost at least three consecutive games three times this season.

Missouri hangs on for win over Alabama

COLUMBIA, Mo. — Way ahead, it looked as if No. 18 Missouri might beat 10th-ranked Alabama in a laugher. The joke was almost on the Tigers.

Dru Smith and Missouri built a 22-point lead in the second half, then held off a frantic rally by the Crimson Tide for a 68-65 victory on Saturday.

The Tigers held their largest lead with 13:05 left and were still up by 20 with less than six minutes remaining.

“Our guys started settling, because they looked at the score instead of finishing the game on the floor,” Missouri coach Cuonzo Martin said. “You can’t do that with this level of team. But on the flip side, tremendous execution defensively down the stretch on the last possessions.”

Missouri's only points down the stretch came on four free throws. The Crimson Tide started scoring on nearly every possession and Herb Jones had two chances to give Alabama the lead in the final 20 seconds, but he missed a layup and had another try blocked by Mitchell Smith.

The Crimson Tide had one last chance to tie it, but Jaden Shackelford’s contested 3-pointer at the buzzer missed.

“We’re a bunch of gritty types of dudes, and it starts at the top,” Mitchell Smith said.

“We couldn’t have asked for a much better effort in the last 13 minutes,” Nate Oats said. “If we get that effort for 40 minutes, we win the game.”

The Tigers built their lead by outrunning the Crimson Tide in transition and outmuscling them inside. Missouri finished with 46 points in the paint.