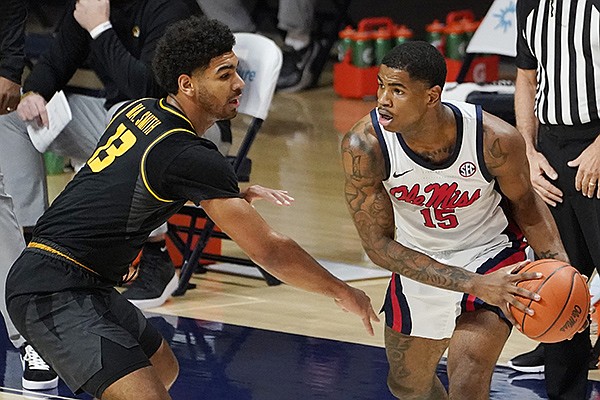 Ole Miss (11-8, 6-6 Southeastern) stretched their win streak to three games, including a win over No.16 Tennessee and the No. 10 Tigers. The surge left the Rebels in the middle of a logjam of the SEC standings, with eight teams within three games of each other.

“Having success gave us confidence,” Mississippi coach Kermit Davis said. “We didn’t give up baskets in transition and did a good job staying in front of them. You can’t let Missouri play downhill.”

Devontae Shuler and Luis Rodriguez added 15 points apiece for the Rebels (11-8, 6-6 Southeastern), extended their winning streak to three games that includes wins over No. 16 Tennessee and the No. 10 Tigers.

“That (17-2 run) was the critical part,” Davis said. “It’s a coach’s cliché but it’s true how you finish and how you start. We got out in transition, got our hands on the ball and made some good plays. It was great to see.”

Dru Smith led Missouri (13-4, 6-4) with 17 points as the loss snapped a three-game winning streak. Javon Pickett added 10 points as the Tigers struggled at the free throw line, shooting 5 of 15 (33 percent) and were outrebounded 34-19.

“We just didn’t have the edge we normally have,” Missouri coach Cuonzo Martin said. “I don’t know where to start. We didn’t have it tonight and give those guys credit.”

COLUMBIA, S.C. — John Petty Jr. wasn't going to let another one slip away for Alabama.

The 11th-ranked Crimson Tide were coming off their first Southeastern Conference loss of the season last Saturday and were locked in a tight game with pesky, determined South Carolina.

Behind Petty's 20 points and three 3-pointers, they came through, bouncing back from their loss to No. 10 Missouri with an 81-78 victory over the Gamecocks on Tuesday night.

“I was going to do whatever it took to get a win,” Petty said.

But James Rojas preserved the win with two foul shots to keep Alabama's best league season in more than six decades going. The Crimson Tide (16-5, 11-1) won their sixth straight over the Gamecocks.

With South Carolina trailing 79-76, coach Frank Martin said he drew up a play with three options for a tying 3-pointer. Instead, Jermaine Couisnard connected with Justin Minaya for an uncontested layup.

The Gamecocks were forced to foul Rojas, who made his free throws.

“Instead of running what we asked to run, we just kind of ... no mental connection with the situation,” Martin said.

The Gamecocks had their chances. Wildens Leveque tied it at 59 with 11:11 left before Alabama went ahead for good on Jaden Shackelford's layup on the following possession. Jahvon Quinerly extended the lead with a jumper.

The Gamecocks scratched back within 65-64 on Lawson's 3-pointer and a foul shot by Bryant. But Petty, the team leader in made 3s, hit another from behind the arc and South Carolina could not rally, losing for the third time in its past four games.

Alabama, which fell behind by 22 points to Missouri before losing 68-65, trailed South Carolina 16-5 with less than five minutes elapsed.

That's when the long-range shooting of Petty and Joshua Primo got Alabama back in contention. Primo, a 6-foot-6 freshman, had totaled seven points combined in his last three games with only one 3-pointer. This time, he hit three of his team's six 3s in the first 20 minutes and had 10 points at the break.

Quinerly finished with 13 points for the Tide while Petty added eight rebounds, two blocks and a steal.

Tennessee holds on to beat Georgia

KNOXVILLE, Tenn. — Jaden Springer scored a career-high 30 points to lead No. 16 Tennessee to a 89-81 victory over Georgia on Wednesday night.

Tennessee was playing without 6-foot-6 senior Yves Pons, who is nursing a right knee injury. Pons, a leader in rebounds and blocked shots, had scored 69 points in the last five games.

Without that size, the Vols went with several four-guard combinations to go with inside player John Fulkerson.

Shots that fell in the first half for the Vols rimmed out early in the second. Tennessee built its lead to 23, 51-28, in the first couple minutes of the second half. From there Georgia's defense became effective.

Springer helped Tennessee recover by hitting two free throws and a 3-pointer to get the lead back to 19 with just over 11 minutes to play.

It took four minutes for the Bulldogs to chip away and narrow the gap to 67-54. A three-point play by Johnson was key in the run.

Johnson had a couple driving baskets with just over a minute to play to cut Tennessee's lead to six, 79-73.

It didn't get any closer.

Leading by five midway through the first half, Tennessee went on a 9-2 run, fueled by Springer who had six of his 12 first half points.

Cooper scored 18 of his 19 in the second half in 14 minutes and finished 10 for 11 from the foul line altogether.

The Tigers entered ranked 289th nationally among Division I teams in scoring defense, surrendering 76.2 points per game. Auburn had allowed at least 75 points in six straight games going 2-4 during that stretch. They'd also given up 75 or more in eight of their last nine games.

Auburn faces Kentucky at Lexington on Saturday. The Commodores head to Starkeville to face Mississippi State on Saturday.

LSU pulls away on the road

STARKVILLE, Miss. — Cameron Thomas scored 25 points, Javonte Smart had 22 points and 11 assists, and LSU pulled away down the stretch to beat Mississippi State 94-80 on Wednesday night.

Deivon Smith made a layup to cap an 8-2 spurt that trimmed Mississippi State’s deficit to 73-70 with 8 minutes to play. Smart answered with a step-back fade-away jumper and Thomas followed with a 3-pointer to start a 12-3 run that pushed LSU’s lead into double figures for good.

LSU set season highs for field-goal percentage (61.3) and assists (22). The Tigers scored 26 points off 15 Mississippi State turnovers and had a 24-8 advantage in fast-break points.