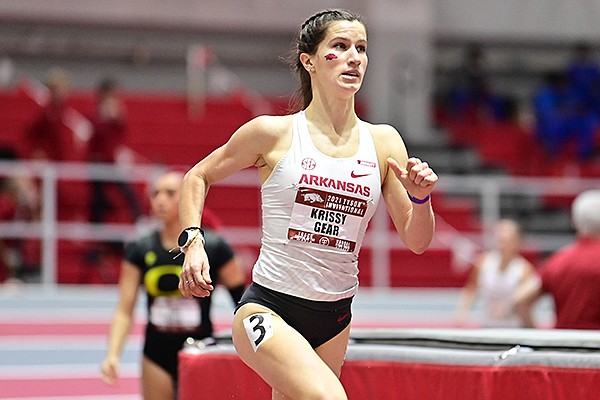 FAYETTEVILLE — University of Arkansas senior Krissy Gear figured there were lot of runners entered in Saturday’s mile at the Tyson Invitational who were good enough to win.

“The field was so strong I knew it could be anyone’s race on any given day, and I really wanted to make it mine,” Gear said. “I’m glad I did.”

Scott was a three-time NCAA champion for the Razorbacks and competed in the 2016 Olympics for her native South Africa.

“I didn’t think I had it in me,” Gear said of breaking Scott’s record. “But that was kind of the point of the race, to go in there with no preconceived notions.

Gear said she believed it helped her for the mile that she ran the anchor leg on the Razorbacks’ winning distance medley relay team on Friday night.

“Sometimes I think I race better when I’ve had a hard effort the day before,” she said. “So I think that helped me out. I don’t think I’d have been able to do 4:31 off just that race.”

Gear’s time ranks second among collegians this season behind Colorado’s Sage Hurta, who ran 4:31.80 Saturday on an oversized track at Iowa State.

“Krissy Gear just did a fantastic job,” Arkansas women’s Coach Lance Harter said. “We had a bunch of Razorbacks run lifetime bests right behind her.”

Arkansas junior Lauren Gregory was third in the mile in 4:34.19 and senior Katie Izzo was fourth in 4:34.39. Izzo and Gregory took first and second in the 3,000 meters on Friday night.

“So our depth really showed through between the 3,000 and DMR yesterday, and coming back in the mile,” Harter said.

“Everybody’s walking away happy and healthy, and so we’re looking forward to even greater things in two weeks,” Harter said, referring to the SEC Championships. “The momentum is in our favor. Our coaching staff has got to sleep well at night knowing that the program is working right on schedule.”

Saturday’s highlight for Arkansas No. 3 men’s team was senior Amon Kemboi winning the 5,000 in 13:38.95 after anchoring the distance medley relay team to a second-place finish.

“Amon’s a special athlete,” Arkansas men’s Coach Chris Bucknam said. “I think we’re still just seeing the tip of the iceberg with him.

“It would have been nice to just run him once this weekend, but we needed him on the DMR, and of course he had no problem taking the stick for us on the anchor.

“Then having him come back and run what he did in that 5,000, it just shows you what kind of athlete he is.”

“I’m proud of Gilbert Boit, who started to slow down with a mile to go, and then picked it back up and really made that race roll at the end,” Bucknam said. “That’s a good group of distance runners and I’m pleased with how they performed. Hopefully those times will get them into the NCAA meet.”

Kieran Taylor took third in the 800 in a personal-best 1:48.32 after running on the relay.

“Having him come back and have a personal best, it shows you how well he’s trained to double and do that,” Bucknam said.

Ryan Hood went 52-3 1/2 to take third in the triple jump for the Razorbacks.

“It was a good meet,” Bucknam said. “We got a lot of things done this weekend.

“I’m a little disappointed we didn’t come out on top at the end. But you can see how balanced all these teams are.”