Moody locked in on defensive end of late 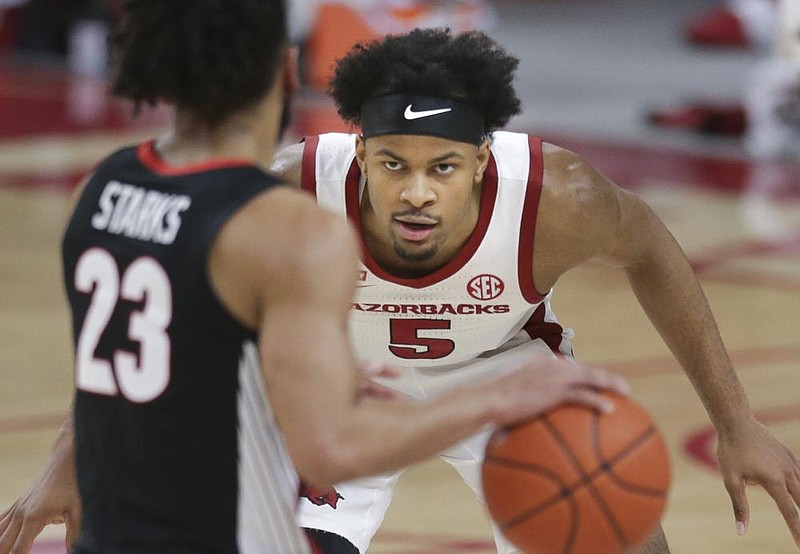 Schmitz is a big believer in Moody translating well to the next level after one college season. The freshman is the 12th-best available player in the upcoming draft and the No. 6 shooting guard in the class, according to ESPN.

During the broadcast of the Razorbacks’ game at Missouri on Saturday, grades were relayed for various aspects of the freshman’s game, including shooting, defense and length. Moody received a B+ grade for his shooting.

Schmitz appeared to like Moody even more on the other end, revealing an A+ for length and A- for defense. His defensive ability can at times become lost because of his propensity as a scorer, but Moody enters Tuesday’s game against Florida in the midst of a lengthy run of strong showings defensively.

Over the last seven games, opponents have made only 11 of 50 shots (22%) with Moody as the nearest defender. He has allowed more than two scores in a game once in that span — 3 of 8 at Oklahoma State.

“He’s done a great job using his length,” Arkansas coach Eric Musselman said Monday. “I think he's now understanding a lot of our schemes. He's done a great job of asking questions. I think the thing that's impressed me is how he studies film. He is laser focused.”

Auburn players finished 1 of 8 from the floor against Moody, and Vanderbilt hit 2 of 9 field goal attempts. The guard gave up one bucket on 11 shots in the Razorbacks’ come-from-behind win over Mississippi State, too, and the Bulldogs missed all six looks from three-point range.

“When (our) scout coach goes through the opposition's offense and I'm kind of down there with the first and second groups going through defensive schemes and when we gather as a group while the scout team is going through the look they're going to give us on an opposing team's set, Moses has really grown on talking about coverages and maybe mentioning things that he sees that can help either him or the team,” Musselman said.

“You very seldom get that with a freshman."

Moody’s impressive seven-game stretch comes on the heels of a rough patch at LSU and Alabama. In those losses, he gave up 12 buckets on 24 attempts, including 5 of 10 beyond the three-point line.

Since, opponents have made 4 of 27 three-point attempts with Moody defending or contesting. They haven’t fared much better inside the arc either — 7 of 23.

The Razorbacks, too, have given up only .87 points per possession with Moody on the floor during their six-game SEC win streak, according to HoopLens. In those games, he has recorded five blocks and six steals, two each in the overtime victory at then-No. 10 Missouri on Saturday.

The five blocks in that span are second only to Connor Vanover.

“He’s one of the best players in the country, and one of the best freshmen, for sure,” ESPN college basketball analyst Dalen Cuff said on Saturday's broadcast. “He needs to continue to develop his range and be comfortable knocking down threes at a little bit higher of a clip, but he’s got great length, he’s got a great body.

“Moody has all the tools necessary. He could have a very productive and long NBA career.”