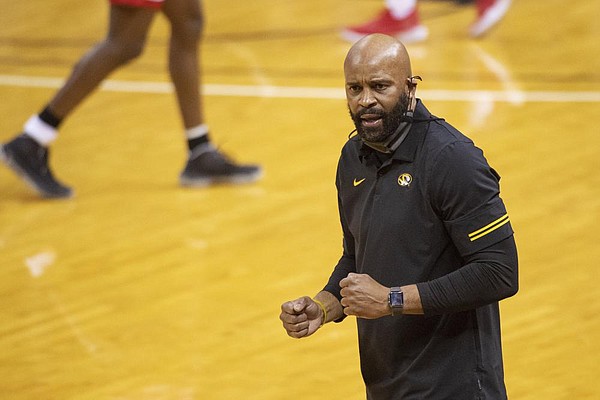 FAYETTEVILLE — The SEC had three teams in the NCAA selection committee’s first public release of the top 16 NCAA seeds on Saturday, with No. 7 seed Alabama, No. 11 seed Tennessee and No. 16 seed Missouri.

The Volunteers and Tigers then both lost on Saturday. Missouri’s loss was at home to Arkansas, and it almost certainly knocked the Tigers out of the top 16 seeds.

“I guarantee you if the committee was doing this again tomorrow, they wouldn’t be that 16th overall,” ESPN bracket expert Joe Lunardi said on the SEC Network on Saturday night. “Their metrics, their NET, their KenPom, etc. have been in the 30s, low 40s for the last two or three weeks. They were getting in on resume and quality wins, which are ample, but I’m sure that they would slide off based upon that loss, because it was at home.

“I’m not saying they can’t get back there. If they show they’re the Missouri we’ve seen all year long, with [Jeremiah Tilmon], then they’re very much going to be fine. If there was a bracket tonight or tomorrow morning, they would be a 5 [seed].”

Discussions for SEC player of the year candidates have begun, and league-leading Alabama will have a strong one in senior Herbert Jones, who was named to the Naismith Player of the Year midseason team by the Atlanta Tip Off Club last week.

Jones, who has been playing through back pain, led five Alabama players in double figures with 21 points in a 115-82 win over Georgia on Saturday.

Other top contenders should be Arkansas guard Moses Moody and LSU guard Cameron Thomas, both freshmen.

No surprise, league-leading Alabama leads the SEC with a 5-1 record in conference road games, but the Tide are just one of eight conference teams with a .500 record or better in SEC road games. Arkansas, at 4-3, is the only other SEC team with a winning road mark.

Auburn, LSU, Missouri, Mississippi State and Tennessee are all 3-3 in conference road games, while Florida is 2-2.

Vanderbilt’s 72-51 rout of Mississippi State on Saturday gave every SEC team at least one league win on the road. The Commodores joined South Carolina (1-3) and Texas A&M (1-3) with just one victory, Kentucky (2-4) and Georgia (2-5) have a pair and Ole Miss (3-4) has three. Arkansas, Georgia and Ole Miss are the only SEC teams to have played seven road games.

Reigning SEC player of the week Devontae Shuler of Ole Miss had a massive homecoming in a Rebels’ win on Saturday.

Shuler, a native of Irmo, S.C., scored a career-high 31 points on 8-of-13 shooting and added a season-high 7 rebounds in Ole Miss’ 81-74 win at South Carolina. The Rebels won their fourth consecutive game.

“I’ve never had a win here,” Shuler said. “I just locked in because I knew this was my last game here and for my team and family in the stands. I did what I did to make them happy.”

Alabama scored the second-most points in a game in school history and its highest total in an SEC game in Saturday’s 115-82 rout of Georgia.

The school scoring record came with a 124-point performance against South Florida on Dec. 9, 1971.

LSU’s Javonte Smart and Cameron Thomas were selected as the SEC players of the week by the league office on Monday.

Smart, a 6-4 junior from Baton Rouge, was named SEC player of the week after averaging 21 points, 6.5 assists and 3.5 rebounds while hitting 16 of 23 shots (69.6%) in wins over Mississippi State and Tennessee.

Thomas, a 6-4 guard from Chesapeake, Va., was named SEC freshman of the week after averaging 25 points, 4 rebounds and 3.5 assists in two games. Thomas, who went 11 of 11 at the free-throw line in the win over Tennessee, has scored 20-plus points in five consecutive games.

The SEC has assigned an LSU at Ole Miss matchup on Wednesday in what will be the Tigers’ second road trip to Oxford, Miss., this season.

The announcement from the SEC office gave the rationale for LSU’s two road trips to Ole Miss as being a way to keep teams on pace for equal home and road games. The Tigers had a Jan. 9 road game at Missouri postponed due to covid-19 issues within the Missouri program and beat the Rebels 75-61 on that date at The Pavilion at Ole Miss.

If LSU completes its schedule, it will have six two-game series this season — against Texas A&M, Florida, Alabama, Arkansas, Georgia and Ole Miss.

Missouri forward Jeremiah Tilmon, who missed the Tigers’ loss to Arkansas on Saturday, is also expected to miss the game at Georgia tonight due to a death in the family.