Tate a 'calming factor' in win over Gators 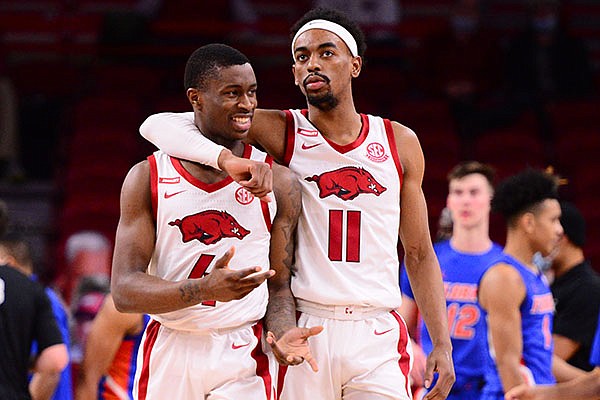 Arkansas guards Davonte Davis (4) and Jalen Tate (11) are shown during a game against Florida on Tuesday, Feb. 16, 2021, in Fayetteville.

FAYETTEVILLE — Jalen Tate had his jumper working Tuesday against Florida.

Arkansas’ graduate-transfer point guard opened the game with a midrange jump shot from a step inside the right elbow. Then, late in the second half, he buried a similar shot from essentially the same area of the floor to provide the No. 24 Razorbacks some much-needed cushion that put the Gators away.

Tate finished with an efficient 14 points in the 75-64 victory, Arkansas’ seventh straight in SEC play. He made 6 of 10 shots, including all three of his midrange looks. He also made his second three-pointer in the last five games.

“Then when you add in that his jumper was hitting, it adds another dimension to his game. I mean, he's hard to guard.”

Tate’s midrange success comes after a three-game stretch in which he struggled with the shot. Against Mississippi State, Kentucky and Missouri, he was 4 of 13 on such attempts, including 2 of 7 on short midrange jumpers.

But, confidently and unafraid of the moment, he connected on a timely jump shot with 2:16 remaining to give the Razorbacks a 65-62 edge. Arkansas led by at least three points the rest of the way.

Tate’s impact was felt even when he wasn’t on the floor. Arkansas played Florida even in the 8 minutes, 48 seconds the guard sat, but its offense was largely ineffective in that span. The Razorbacks scored 2.05 points per minute with him in the lineup and 1.25 without him.

“I think the biggest thing is we all saw when he was out of the game how much we missed him,” Arkansas coach Eric Musselman said. “We missed him tremendously when he was out for a short stretch because he picked up fouls and I wanted to have him available down the stretch.

“We have to continue to work when he’s out of the game for us, which we’ll start doing as we get ready for our next game.”

Although he relished the opportunity to take the big shot in the final minutes, Tate was at his best in the first half as the Razorbacks built a 40-30 halftime lead. He scored nine points on 4 of 6 from the floor prior to the break and pitched in a pair of assists, which set up a dunk from Davonte Davis and a three-pointer by Moses Moody.

In the second half, Tate grabbed two offensive rebounds and added a layup before picking up two fouls over 38 seconds. He watched the next 6 minutes, 35 seconds on the sideline, and Arkansas was outscored 11-9.

Smith, who stuffed the stat sheet with 15 points, 6 rebounds, 5 steals, 4 assists and 2 blocks, said he talked to Tate about his fouling. His message: You can’t keep doing that. We need you to help us extend the lead.

Davis, who scored a game-high 18 points, described Tate as the head of the snake for the Razorbacks. Somewhat quietly, Tate is averaging 14.3 points over the last three games after scoring 18 total in the team’s previous three outings.

“When he’s rolling, we’re all rolling,” Davis said. “We just know he’s always going to play hard. He’s going to always do the things that we need as a point guard and he’s also going to do things and play other roles as well, such as getting rebounds and also dishing the ball — just making plays for others.”

Arkansas then made 7 of its final 8 free throws to seal the win.