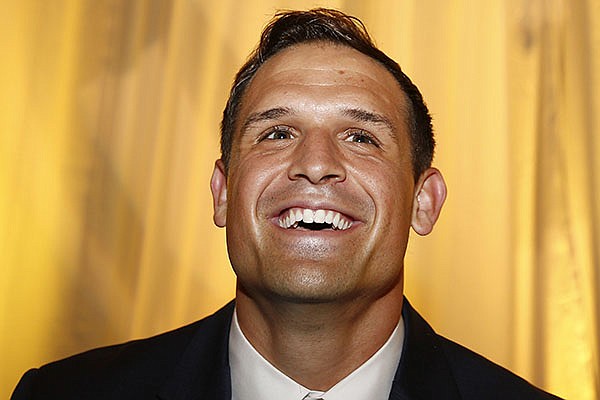 In his first video conference with media after being promoted to linebackers coach at the University of Arkansas, Scherer was having a rough time.

Not that Scherer couldn’t find the right words or was nervous about the group interview setting.

No, the problem was the former Missouri linebacker and protege to Arkansas defensive coordinator Barry Odom had sweat rolling down his forehead and into his eyes.

“I’m sorry, I was just working out with the guys in there,” said Scherer, wiping the sweat from his brow early during the interview. Later, he paused to grab a towel to soak up the sweat.

Scherer At a Glance

Notable Scherer is one of three Arkansas assistant coaches who either worked or played for Barry Odom at Missouri.

That moment encapsulates the “who” and the “why” for the 27-year-old Scherer, who is only five years removed from his final season as a linebacker for the Tigers. After a long recovery from knee surgery, the 6-3, 235-pound Scherer worked out with several NFL teams, but eventually had to forgo his playing career. He had a brief stint in real estate before joining Odom’s Missouri staff as a graduate assistant in 2019.

The St. Louis native spent last season as a defensive quality control assistant for the Razorbacks, including a one-game promotion to on-field duties when Coach Sam Pittman was on covid-19 quarantine for a road game at Florida.

Now he’s a full-time Power 5 assistant coach at a very early stage of his career.

“I’m thankful to Coach Pittman, for sure,” Scherer said. “I’ve had the opportunity to be around a lot of great football players and lot of great coaches, and I’ve learned over the years kind of seeing how it works.

“I’m definitely ready for this no matter what age I am. I’m ready to push these guys to be the best they possibly can be, and that’s the only way I know. The age thing, I get, but I only know one way to do this thing.”

Pittman secured a pay raise for Odom this winter after he was considered a prime candidate for defensive coordinator jobs at LSU and Texas, and with the increased salary to $1.75 million per year came more say in defensive decision making.

Scherer sat next to Odom in the press box at games in 2020 and fulfilled the “eyes in the sky” role for Odom when he served as interim head coach for the Florida game.

“Michael knows Barry’s system,” Pittman said, relating that Scherer’s lone week as an on-field assistant was an eye opener. “The kids that we have on our team raved about him and his coaching ability. And again, he knows the system. He has many ties in Missouri, and so we’re going to put him in that area [for recruiting] as well as spots in Texas.”

Scherer acknowledged his primary recruiting duties will be in Missouri and parts of Texas, and summed up his recruiting game plan: “I’m going to go find the best linebackers I possibly can in the country. I don’t care where they’re at.

“If you look at Coach Odom and his defenses and the success of the linebackers throughout these defenses, there’s no reason why anyone in the country wouldn’t want to come play linebacker here. Just look at last year, and you can go back to Missouri. Look at the guys we had there.”

Odom, Sean Weatherspoon, Kentrell Brothers, Scherer and Nick Bolton are considered some of the greatest Missouri linebackers of all time. Odom worked with all those others for all or parts of their college careers.

“He’s a great coach, a great leader of men and the players love him, I love him,” Scherer said of Odom. “He’s been probably the biggest role model in my life over the past few years, and he’s shaped my coaching career into what it is today. He’s a guy I can’t thank enough for everything he’s done.”

Odom probably sees some of himself in Scherer. Both suffered career-ending knee injuries as college seniors before jumping into coaching.

Scherer has a strong bond with Odom and cornerbacks coach Sam Carter, the former All-Big 12 safety at TCU who started his coaching career as a graduate assistant at Missouri in Scherer’s senior year of 2016.

“Sam came to Mizzou when I was still a player there, and he was an analyst there, I think, for the last two years of my career,” Scherer said. “From that point on, being at Missouri with Barry, we are extremely familiar with each other. Obviously we all traveled south together, so that relationship is super strong.

“Sam is like a brother. Coach Odom is another father figure to me and has been that in my life and has been since the moment he came back to Mizzou. It’s kind of just continuing on what we have, to be honest with you.”

Scherer said his work last season was critical in amping his knowledge of Odom’s schemes.

“I did a lot of deep-diving into our scheme and the plays we were running and the calls we were making during a game, so that when I was up in the box with Coach Odom I could help him make adjustments or offer suggestions as he’s calling the game,” Scherer said. “We can work together sitting next to each other.

“Really, I studied the scheme that we ran for hours and hours on end, figured out every position on the field so that in a game I could be useful and make adjustments or help out where I could.”

“It’s awesome to have leaders like Grant and Bumper and Hayden Henry and Dede Edwards coming back as seniors,” Scherer said. “They definitely set the tone for the room. They’re the example for all the guys.

“Obviously being younger and being new to this, it’s good to have them to also be able to hammer those guys into shape because the fact of the matter is they’ve been very successful in what we’ve done. To the younger guys, if they want to be successful, they just look at those guys.”

Scherer thinks his small differential in age from the players he’s coaching could be an asset.

“I think it helps to be able to relate to the kids,” he said. “I also know I think everyone’s goal when they go to college is to graduate, and it wasn’t too long ago that I went through that process of having to go to school, do football and everything else that comes along with it, and did it at a high level and successfully.

Scherer was asked about the players raving about his abilities.

“It’s awesome that the guys feel that way,” he said. “Since I’ve been here they’ve been awesome to me, and I’ve tried to do everything that I can to help them become better players and better human beings.