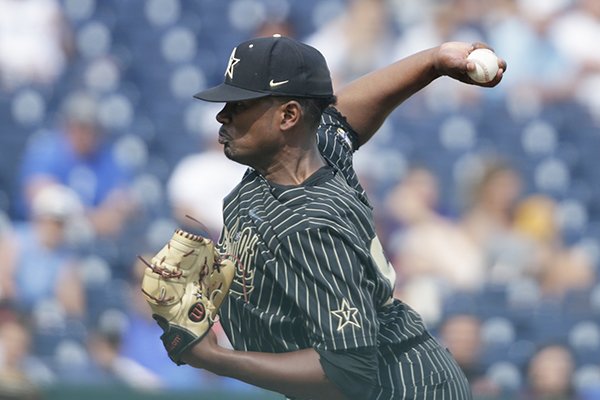 OMAHA, Neb. — Vanderbilt returns most of its everyday lineup, features the top two pitchers in college baseball and won the most recent national championship.

Still, the Commodores aren't even considered the team to beat in the Southeastern Conference, let alone the nation, not with Florida's roster overflowing with talent at nearly every position.

Among other top contenders to reach the College World Series in Omaha in June are UCLA, Texas Tech and Louisville. The season opens Friday.

The expectations remain the same inside the Vanderbilt clubhouse. The Commodores have played in the NCAA super regionals eight times between 2010-19, reached the College World Series finals three times since 2014 and won two titles.

The Commodores were 13-5 when their attempt to defend their 2019 championship was cut short when the covid-19 pandemic shut down sports across the nation in mid-March.

Kumar Rocker, who threw a no-hitter in super regionals in 2019 and was CWS Most Outstanding Player, is back and is the projected No. 1 pick in the Major League Baseball draft with his 96-mph fastball. Jack Leiter, who complements a mid-90s fastball with a knee-buckling curve, could be selected right behind Rocker.

The versatile Austin Martin, the No. 5 pick in the draft last year, is the key departure. The Commodores should have one of the nation's best outfields with Cooper Davis, Isaiah Thomas and speedy freshman Enrique Bradfield.

Bradfield is among 18 newcomers on the 43-man roster, which is larger than normal because last season did not cost players a year of eligibility. The logjam of talent will require young players to be patient, not just at Vandy but at schools across the country.

“If only nine people are eating at the table, that means a lot of people are watching,” Vandy coach Tim Corbin said. “When you’re watching, you have to find other roles that are conducive to helping the team move forward. There’s a playing role and there’s a team role, and it’s very understandable that most of these guys on any given day are going to have to understand what a team role is.”

The Bruins lost a mainstay in first-round draft pick OF Garrett Mitchell, but this will be another strong defense up the middle with SS Matt McLain (.397, 19 RBIs) the headline player. RHP Zach Pettway (3-0, 1.05) had 29 strikeouts against one walk and returns as the Friday night starter.

Eight returning everyday players and a solid pitching staff put the Red Raiders in position to be Tim Tadlock's best team. Tech has made the CWS four times since 2014. SS Cal Conley (.371) and CF Dylan Neuse (.355) lead an offense that has a nice mix of power and speed, and RHP Micah Dallas (1-0) gave up one earned run in 15 1/3 innings.

The Cardinals lost big contributors in the field and on the mound, but coach Dan McDonnell's program is at the point where there's always talent waiting in the wings. OF Levi Usher (.411) and OF Luke Brown (.328) each stole 11 bases and C Henry Davis (.372, 13 RBIs) might be the best player in the nation at his position.

The Wolverines played in the CWS finals in 2019, briefly were No. 1 in the nation last year and are the Big Ten favorites in 2021. LHP Steven Hajjar (3-0, 2.70) is one of the top starters in the country, and closer Willie Weiss is back after missing 2020 because of injury.

The Tigers are a bit under the radar with a team that likely will count on freshmen OF Dylan Crews and 1B Tre Morgan in the everyday lineup and move Jaden Hill from the bullpen to the No. 1 starter's spot.

The left side of the infield will have a new look after two draft picks departed. Freshman Jacob Gonzalez is the projected shortstop and Tim Elko (.354) is set to move to third base after playing first base and in the outfield. LHP Doug Nikhazy (3-1, 2.35) and RHP Gunnar Hoglund (3-0, 1.16) are among the best starters in the SEC.

The Hurricanes bring back most of its everyday lineup, including star C Adrian Del Castillo (.358). Keys are the development of freshman SS Yohandy Morales and a reconfigured pitching staff.