Arkansas on outside of top 16 for now 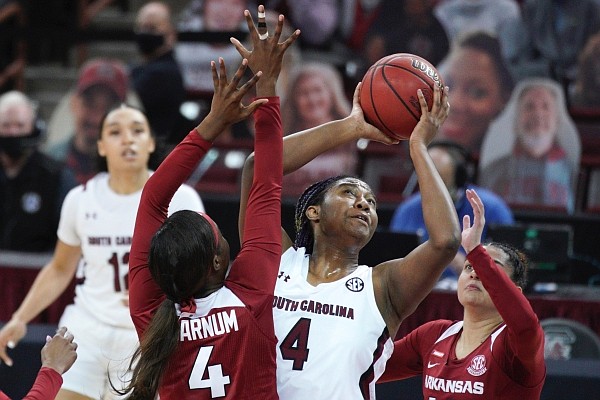 The SEC currently would have five teams in the top 16 seeds for the women’s NCAA Tournament, according to the reveal Monday.

South Carolina is a No. 1 seed and Texas A&M is a 2, according to the NCAA Division I Women’s Basketball Committee. Georgia is a 3 seed, while Tennessee and Kentucky register as No. 4 seeds.

Another reveal is set for March 1 at halftime of the Baylor-Texas game, which is exactly two weeks before the field of 64 will be selected March 15.

*-Opted out of season

Nina King, women’s basketball tournament committee chairman, called the selections a “snapshot at this moment” during a Zoom interview on NCAA.com.

“We really were looking at teams and their full body of work and comparing what we have,” King said. “Obviously, we can’t control teams that haven’t been able to play games or that have been on extended pauses.”

Arkansas was a sixth SEC team King named that was in the discussion for a top 16 seed. The five SEC teams among the top 16 are responsible for six of the Razorbacks’ seven losses. The other loss came to Maryland, which is a 2 seed.

The latest bracketology by ESPN’s Charlie Creme has eight SEC teams in the field of 64. Arkansas is tabbed as a No. 5 seed, with Alabama and Mississippi State being No. 7 seeds. LSU is among the first four out and Ole Miss is in the next four out, so the league has 10 teams in the discussion. The Atlantic Coast Conference and the SEC are tied for the most teams selected by Creme.

Auburn has yet to win an SEC game this season and is on a 13-game losing skid.

Coach Terri Williams-Flournoy has said the Tigers (5-15, 0-12) have been forced to play lots of newcomers after several players opted to transfer in recent years. There are nine newcomers on the Auburn roster this season.

Several of those transfers are now flourishing for other teams.

Robyn Benton, an SEC All-Freshman pick, played two seasons for the Tigers. She transferred to Kentucky and is averaging 8.8 points per game for the No. 17 Wildcats.

Another guard, Brooke Moore, was granted her eligibility to play this season at Purdue and is the team’s second-leading scorer at 10.5 ppg.

Erin Howard is redshirting this season at Florida State. Natalie Kelley is currently leading Southeastern Louisiana in rebounding. Lauren Hansen, a four-star recruit from New York, averaged 7.9 ppg in her first season at Auburn, then transferred to Missouri. She’s averaging 6.4 ppg for the Tigers this year.

Forward Abi Jackson, who started games for the Tigers, is now averaging a little more than four points off the bench for Missouri State, while Maliya Perry is now playing at Dayton.

South Carolina’s Aliyah Boston earned her 10th double-double of the season with 12 points and 13 rebounds to help South Carolina to a 66-59 win over LSU on Sunday.

The 6-5 sophomore notched her third double-double in a row and seventh in SEC play, which matches her conference total from last season. Boston also swatted six shots, moving her into seventh place in program history with 146 career blocks.

Tennessee’s game at Mississippi State scheduled for Tuesday was postponed due to inclement weather and travel issues. A makeup date has not been set.

The game, originally slated for Feb. 4, was rescheduled because of covid-19 issues within the Lady Vols’ program.

Tennessee had travel problems getting back to Knoxville after Sunday’s game at Texas A&M because of a winter storm that battered the state and parts of the Midwest.

Rhyne Howard, the reigning SEC Player of the Year, poured in a game-high 31 points to help Kentucky pull away for an 88-80 win over Florida on Monday.

The 6-2 junior scored 13 third-quarter points to help Kentucky build a double-digit lead, then keyed a late 12-1 spurt to put the game away. She scored five points and added an assist as the Wildcats pulled away after the Gators pulled within 75-72. Howard hit 12 of 20 shots from the floor, including 4 of 7 from three-point range, and now has 1,493 career points.

That came after Howard was limited to 8 points — but added 7 rebounds, 7 steals and 6 assists — in 37 minutes to help Kentucky avenge an earlier loss at Tennessee.

Alabama’s Jasmine Walker earned SEC Player of the Week honors after setting a school record with 41 points in the Crimson Tide’s victory over Auburn on Sunday.

Ole Miss’ Madison Scott was named SEC Freshman of the Week for the fifth time this year and third consecutive week. She scored 11 points on 4-of-5 shooting and grabbed 10 rebounds to help the Rebels defeat Alabama for the first time since 2015.

The second of a challenging two-step for the Lady Vols this week. Tennessee, which has lost two straight, hosts No. 2 South Carolina before traveling to Athens to play its fourth straight ranked opponent. The Bulldogs have won three straight and have an open date today.